If America doesn’t nip black racism in the bud, the country will not be safe for anybody, especially whites.

That statement makes “trained” white people queasy, but the truth is the truth. The only acceptable racism in America is against whites.

We recently reported on 3 black nurses who laughed as a white World War II veteran in their care gasped for air. The man eventually died.

Watch as the former nursing supervisor Wanda Nuckles explains how she responded to the patient before she knew the hidden camera video existed. And as you can hear from the questioning of the victim’s attorney, the nursing supervisor recants, as the video proves she lied through her teeth.

In the horrific last moments of his life, Mr. Dempsey calls for help six times before he goes unconscious while gasping for air. According to state records, the nursing home staff found Dempsey unresponsive at 5:28 a.m. This is the type of response to veterans that would make Hillary Clinton proud.

Had this story been about 3 white nurses doing this to a black war veteran, there would be no end to the coverage by the mainstream media.

And that’s one of many such stories.

From PJ Media, we learn of another disturbing story. This one involves a racist black nurse. 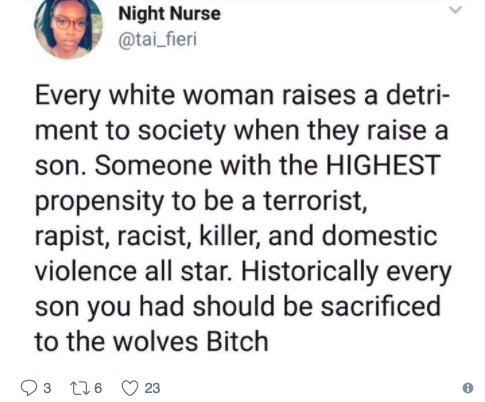 Online Redditors and Twitter users tracked nurse Taiyesha Baker to Riley Children’s Health, an affiliate of Indiana University Health in Indianapolis. PJ Media reached out to the hospital and received this statement:

We are aware of several troubling posts on social media which appear to be from a recently hired IU Health employee. Our HR department continues to investigate the situation and the authenticity of the posts. During the investigation, that employee (who does not work at Riley Hospital for Children) will have no access to patient care.

When asked which department Baker works in, the hospital declined to answer. Baker’s Twitter feed was littered with anti-white sentiments. Redditors compiled a sampling here.

So imagine the level of care this woman gives whites? I suggest authorities review her record for any complaints by whites. And certainly look to see if any white people died in her care.

Again, I ask what the clamor would be if the nurse here was white, and her tweets targeted blacks?

This type of attitude should NEVER be tolerated in America. But as I stated earlier, far too many “Americans” openly accept racism against whites.

We noted what we called the latest war on white people recently.

As The Federalist reported,

Officials from a Maryland high school say they are investigating the appearance of flyers on campus with a simple five-word message about white people — “it’s OK to be white.”

The principal of Montgomery Blair High School, Renay Johnson, explained to a local news station why some were disturbed by the otherwise benign message.

"IT'S OKAY TO BE WHITE" sign found on doors at Montgomery Blair HS in MD. School says flyers were removed and says they're investigating. pic.twitter.com/jSTUwG3gNp

“We are taking this seriously and are investigating this incident,” he said. “Our research so far has indicated that this may be part of a concerted national campaign to foment racial and political tension in our school and community.”

The flyers were discovered outside the school early Wednesday but were taken down before students arrived. The principal sent a letter to the parents informing them about the incident.

According to the Washington Post, the flyers were found at other cities as well.

Serious investigation? Perhaps the notes were written by snowmen?

Or the salesperson for Ivory soap? Or an albino!

I jest; but do we actually know the message behind these messages? The short answer is no.

If the note read, “It’s ok to be Caucasian”, the note would be clear.

This begs the question, “What is it ok to be?”

Could the note have read, “It’s ok to be black” without an investigation being needed? Or what about Asian?

Interestingly, if the note had read, “It’s ok to be French”, most people likely wouldn’t have found it offensive. Swedish? Canadian? So why is “white” so incendiary?

Does “white” imply American white? It seems whites in America are demonized more than most.

Stickers bearing the same message were discovered Wednesday morning on light poles and electrical boxes in Cambridge, Mass., according to a report in the Boston Globe. Similar signs were found on the campus of Tulane University in New Orleans, and in Rocky River, Ohio.

It appears that the prank was orchestrated by users of the infamous website 4Chan, where various trolling operations are conjured up and implemented by members.

I love how they call this a “prank”, and describe the activity as “trolling”.

And Leftists wonder why they lost?

The way we stop this unbelievable racist behavior is to acknowledge it exists.