The media tries to sell Hillary Clinton as amazing. However, the public continues to resist!

In yet another “face palm” moment, Hillary Clinton gets embarrassed.

WATCH LIVE: Hillary Clinton receives “Democratic Woman of the Year Award” from the Women’s National Democratic Club in recognition of her contributions to American politics and work as an inspiration for women.

The backlash for the event was cruel. 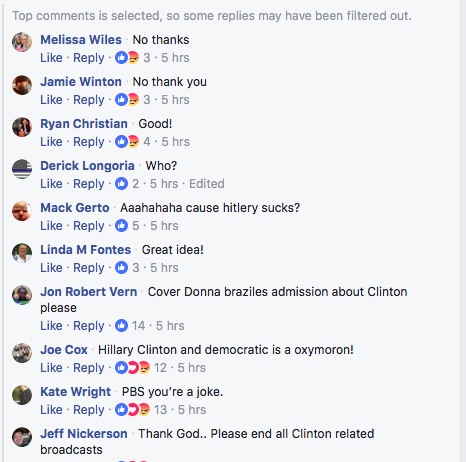 Understand that these comments can be seen by all, when broadcast on Facebook Live. There is no way to moderate them.

In other words, the media can offer no cover. Thus, upon launch, the comments were brutal. However, things got worse.

Overwhelmingly the comments were negative. Murderer. NOT an inspiration to women!

Others commenters mentioned the Uranium One deal, and discussed jail for Clinton.

As you consider these comments, it’s important to note that the event planners likely targeted supposed Hillary Clinton supporters when putting the event together.

Finally, look at the YouTube comments. With just under 5000 views, the video received around 300 “reactions”. In the graphic, you should note that 101 people “thumbs up” the event, while 185 “thumbs down” the event.

Not exactly a ringing endorsement for Hillary Clinton.

In the wake of the latest allegations by Donna Brazile, one would think Hillary Clinton would crawl down her rat hole. She hasn’t, much to the chagrin of the Democratic Party.

Though Clinton said recently that she would not pursue the White House in 2020, there remain hopefuls.

What drugs must you be on to believe that Hillary Clinton would win a rematch with Donald Trump in 2020.

This week an article emerged titled “Hillary 2020? Trump better hope not” alleging that if there were to be a rematch Hillary Clinton would win.

“Trump should be careful what he wishes for,” Brenes wrote. “Clinton might not be a potential candidate now, but the political winds can change quickly. Recent American history is rife with presidential contenders who lost the primary or general election and then went on to become a candidate in subsequent elections.”

Clinton still retains significant support within her party, and Democrats currently have no clear front-runner to replace her.”

While Trump welcomes a Clinton challenge in 2020, he may find himself regretting it if voters come to believe they made a mistake and look to Clinton to rectify the wrong.”

How pathetic, if Hillary Clinton remains the Democrats’ best hope!

The painful truth for Democrats is Hillary Clinton was never a popular candidate. She was forced down the throat of the Left.

TBS reported on Democrat cries for Clinton to just LEAVE:

Hillary Clinton is the skunk at the picnic for the Democrats.

And let’s face it, the Democrats aren’t exactly having an easy time of it these days.

Hollywood still reels from the aftermath of the Harvey Weinstein revelations, for one. Next, RussiaGate finds its focus on the Hillary Clinton and a host of other Democrats, including Obama.

Then we get confirmation from other high-ranking Democrats that Hillary Clinton ran the DNC during the election. You mean we didn’t have to go to Russia to find election tampering?

Those pressures exist, but apparently selling, “What Happened?” takes precedence, because Hillary Clinton refuses to get out of the media cycle.

She appeared Wednesday on Comedy Central’s The Daily Show, where host Trevor Noah asked, “Looking at the Democratic Party now, looking at Hillary Clinton, one thing far too many people say— and I have my own opinions on this— is why won’t you just go away?”

As for Clinton, she feels she remains politically relevant, despite all the revelations of her crooked nature.

To the question by Noah, Clinton replied:

“You know, some of it is just rank sexism. Let’s just be honest about it. I never heard anybody say that to Al Gore or John Kerry or John McCain or Mitt Romney, all the men who lost election in addition the last 17, 18 years. Some of it is just that.”

And some of it is just that the Left want Hillary Clinton, Bill Clinton, Chelsea Clinton, Roger Clinton, and [Insert Any] Clinton gone!

Yet delusional PBS believed that their Facebook Live event would go well? How many $250,000+ speeches have the Clintons given since the truth emerged about them?

The sooner the Democrats dump the Clintons and fess up to their malfeasance, the sooner than begin their drug-addict recovery.