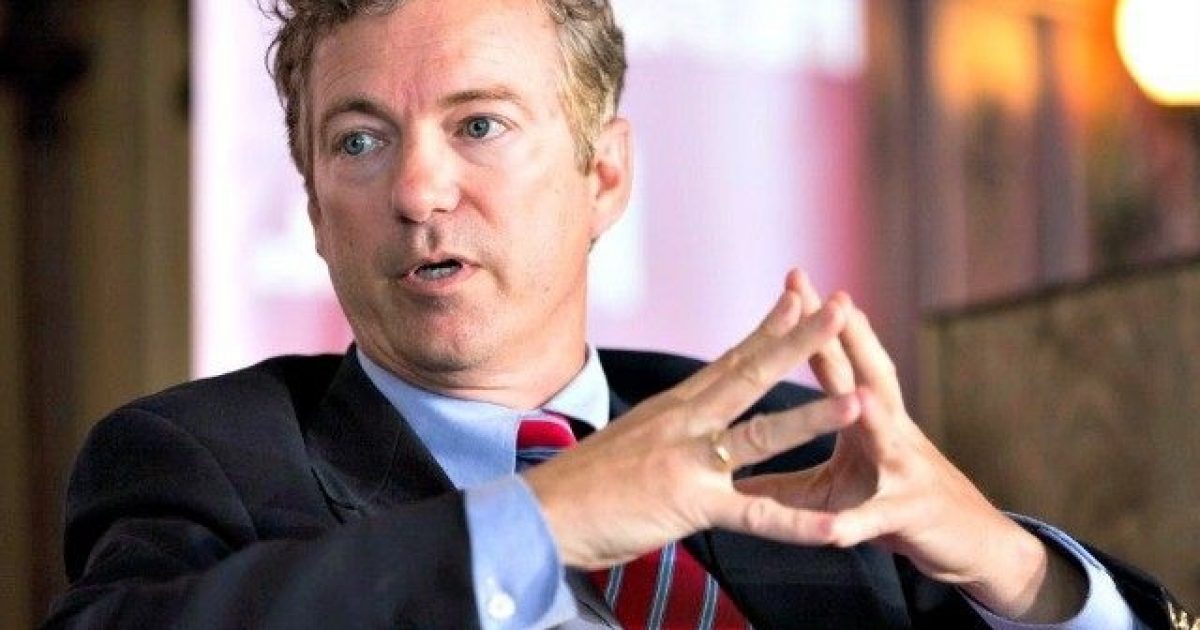 What does Rand Paul know of Hillary Clinton’s dealings? Because knowing about the Clintons can get you hurt…or worse.

Kentucky State Police have arrested a man accused of assaulting Sen. Rand Paul (R-Ky.) at his home in Kentucky.

The suspect was identified as 59-year-old Rene Boucher of Bowling Green, Kent., according to a statement from Kentucky State Police reported by the Bowling Green Daily News.

Police are investigating the assault, according to the statement. Boucher has been charged with assault causing a minor injury.

Sen. Rand Paul (R-KY) said on The Factor that Hillary Clinton is not fit to be president and “should be in prison.”

Paul told Eric Bolling that the former First Lady should face indictment both for the secrets she exposed by using a private email server and for the “pay-to-play” allegations connected to the Clinton Foundation.

He emphasized that the daily schedule for Ambassador Chris Stevens, who was killed in Benghazi, was found in one of Clinton’s emails

I’m not sure what it takes to get the Clintons on your tail, but we know of many who wish they had never made the Clintons’ naughty list.

Here is an excerpt from just one of those who knew things would end badly, and at the hands of the Clintons.

Head of Clinton’s gubernatorial security team in Little Rock .. Gunned down in his car at a deserted intersection outside Little Rock . Park’s son said his father was building a dossier on Clinton . He allegedly threatened to reveal this information. After he died the files were mysteriously removed from his house.

It’s a tragic story with many twists and turns that leaves a Little Rock woman with little information about her father’s murder.

“Shortly before 7:00 Sunday night, police found the bullet-riddled body of a middle-aged Roland man lying outside his car near the intersection of Chenal Parkway and Highway 10 in west Little Rock,” Channel 7’s Geoff Morrell reported in a KATV news broadcast on September 26, 1993.

It was a day that Denise Hickman can recall like it was yesterday.

“I remember getting a phone call from my dad’s widow saying that my father had been hurt. And I asked her what happened and she told me that he was dead. And then I just dropped the phone,” said Hickman.

Someone in a white Chevy pulled up to Jerry Parks car and just started shooting.

“The occupant of the Chevrolet then fired approximately ten shots based upon the evidence we found at the scene,” said Doc Holladay in 1993, back then as a spokesperson for the Little Rock Police Department.

Hickman’s dad was a private investigator and owner of a security company. He would have been turning 67 years old July 3. She was 26 when he was murdered.

“I’M A DEAD MAN,” whispered Jerry Parks, pale with shock, as he looked up at the television screen. It was a news bulletin on the local station in Little Rock. Vincent Foster, a childhood friend of the President, had been found dead in a park outside Washington. Apparent suicide.

He never explained to his son Gary what he meant by that remark, but for the next two months the beefy 6′ 3″ security executive was in a state of permanent fear. He would pack a pistol to fetch the mail. On the way to his offices at American Contract Services in Little Rock he would double back or take strange routes to “dry-clean” the cars that he thought were following him.

At night he kept tearing anxiously at his eyebrows, and raiding the valium pills of his wife, Jane, who was battling multiple sclerosis. Once he muttered darkly that Bill Clinton’s people were “cleaning house,” and he was “next on the list.”

Two months later, in September 1993, Jerry and Jane went on a Caribbean cruise. He seemed calmer. At one of the islands he went to take care of some business at a bank. She believed it was Grand Cayman. They returned to their home in the rural suburbs of Little Rock on September 25. The next day Jane was in one of her “down” periods, so Jerry went off on his own for the regular Sunday afternoon supper at El Chico Mexican Restaurant.

On the way back, at about 6:30 PM, a white Chevrolet Caprice pulled up beside him on the Chenal Parkway. Before Parks had time to reach for his .38 caliber “detective special” that he kept tucked between the seats, an assassin let off a volley of semi-automatic fire into his hulking 320 pound frame.

Parks skidded to a halt in the intersection of Highway 10. The stocky middle-aged killer jumped out and finished him off with a 9 mm handgun–two more shots into the chest at point blank range. Several witnesses watched with astonishment as the nonchalant gunman joined his accomplice in the waiting car and sped away.

It was another three months before news of the murder of Jerry Luther Parks reached me in Washington. The U.S. national media were largely unaware of the story, which surprised me because Parks had been in charge of security at the 1992 Clinton-Gore campaign headquarters in Little Rock.

It’s doubtful that the attack against Paul is related to the Clintons. But you just never know.