Obama corrupted the FBI. And no tweets by former Obama DOJ will change that.

To be clear, the entirety of the FBI is not crooked. But most of the FBI top dogs certainly are. And many people surrounding them turned their eyes from the obvious.

We wrote this of Congress now sees Obama’s FBI:

All of America knows the Obama administration colluded with the Clinton campaign to defeat Donald Trump.

Leftists know this is a certainty. Now they dare us to prove it. And we will.

As with Watergate, the cover-up is far greater than the crime itself. And what we will eventually learn from this will make Bill Clinton’s mea culpa with Lewinsky look like Disney.

Jim Jordan appears on Lou Dobbs after his committee grilled one of the key figures in the Mueller “hit team”:

Rep. Jim Jordan: Listen you can’t make this stuff up. It gets worse each and every day… What deep down scares me, if this actually happened the FBI had a concerted effort with the people at the top to go after one party’s nominee to help the other party’s nominee. If that actually happened in the United States of America and everything each and every day points to more and more likely that that is what took place, it is sad for our country if that took place. And I think it did based on everything I am seeing. All the evidence points to that.

So the fallout has begun.

The Left tried to sneak this one in on us. But the swamp draining at the FBI continues.

The FBI’s top lawyer, James Baker, is being reassigned — one of the first moves by new director Christopher A. Wray to assemble his own team of senior advisers as he tries to fend off accusations of politicization within the bureau.

Baker told colleagues he will be taking on other duties at the FBI, according to people familiar with the matter. In recent months, Baker had been caught up in a strange interagency dispute that led to a leak probe and attracted the attention of senior lawmakers, but people familiar with the matter said the probe had recently ended with a decision not to charge anyone. The leak issue had not played a part in Baker’s reassignment, these people said.

Baker’s departure came on the heels of Peter Strzok’s “reassignment”. He too will eventually be fired.

But there are quite a few. As Sharyl Atkisson writes, there are at least 8, with more to come: 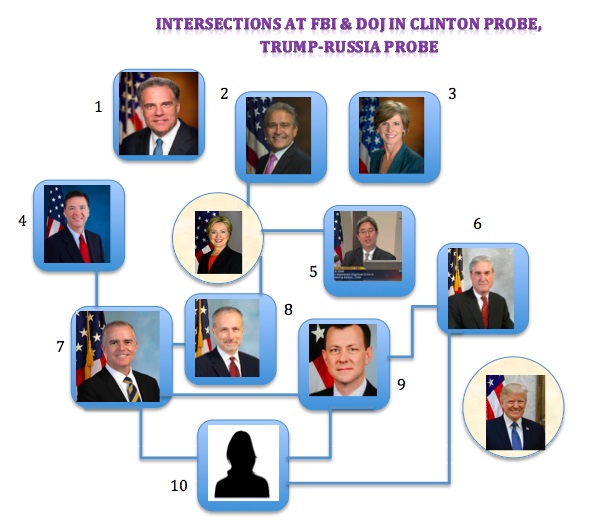 Why do heads seem to be rolling—or at least tilting—at the Department of Justice and FBI?

Eight high ranking Department of Justice and FBI officials have been removed, reassigned or are rumored to be leaving. They include the top FBI agents who worked on two of the agency’s most high-profile investigations in the past two years: the probe into Hillary Clinton’s mishandling of classified information as secretary of state, and the Trump-Russia collusion investigation.

There’s been a great deal of news coverage about allegations of collusion between President Trump and Russia; much of it apparently correct and some of it not.

Less attention has been given to concurrent investigations that seem to be claiming scalps even if indirectly.

The investigations into the investigators include Congressional inquiries and a multi-faceted probe launched by Department of Justice Inspector General Michael Horowitz surrounding the FBI decision not to prosecute Clinton. Specifically, Horowitz—who was appointed by President Obama—said he’s reviewing:

Funny how the investigation into collusion has not a single Trump administration head on the wall. However, the Democrats have 8 disgraced FBI personnel and counting.

When will the investigation finally cut deep enough to mortally wound the Democrats? Soon