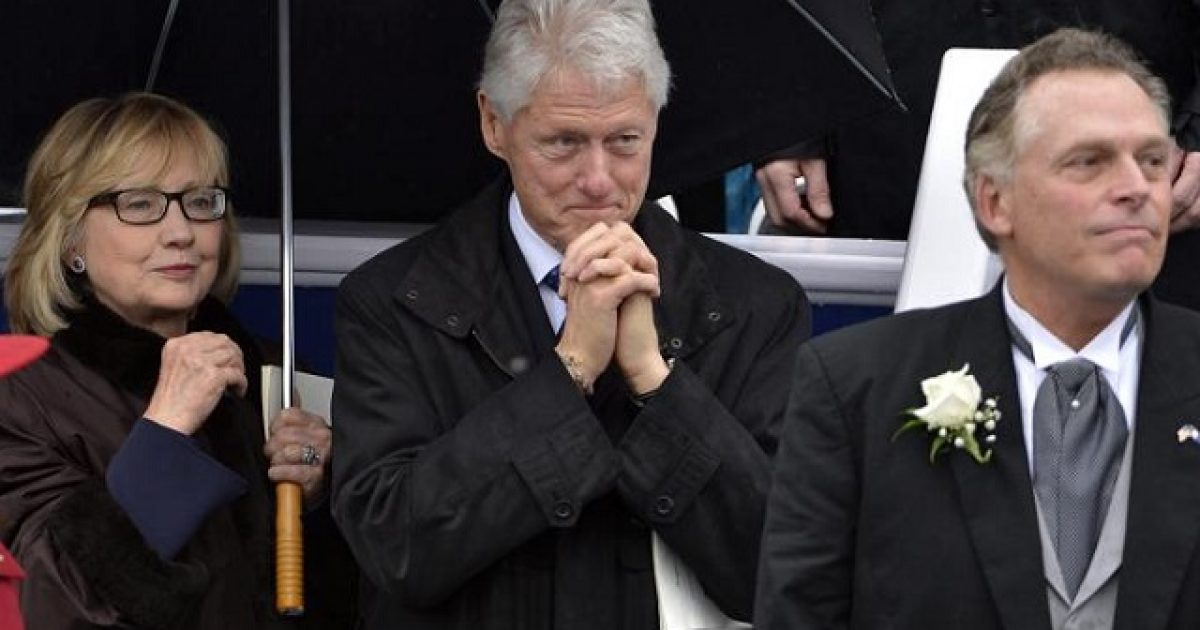 Perhaps they feel empowered by the victory of Donald Trump over Hillary Clinton, but the Chinese are on the attack.

Is this yet another sign the Clintons are losing power?

Ah man, another “green energy” debacle. Only this time, Obama can’t use the taxpayers as a slush fund to bail out his cronies.

Let’s follow the money trail, as the article continues,

A group of 32 Chinese citizens filed the suit last week in Fairfax County, Virginia court, claiming that they were swindled out of about $560,000 apiece as a result of misrepresentations made by McAuliffe and Rodham—two of the most prominent and politically connected proponents of the venture aimed at manufacturing electric cars in the U.S.

So McAuliffe finds himself in another pickle, and when one thinks of pickles either a Clinton or a Weiner will be on the menu.

Believe it or not, McAuliffe fancies himself a presidential contender in 2020. According to sources, he sees the Democrats’ gubernatorial win in Virginia as a crystal ball into his political future.

I can’t say that I’m surprised. Because Democrats do love their scoundrels.

Recall that last year McAuliffe’s business dealings with foreign nationals were under investigation by the FBI and federal prosecutors. So even though the dust hasn’t cleared on one scandal, McAuliffe finds himself embroiled in yet another. And who knows; the two could be related.

How many scandals does it take to qualify as the front-runner for the Democrats’ presidential ticket? I will leave that to the experts to decided. But one thing is for sure: McAuliffe will be a contender.

But he didn’t make the Top 15 in WaPo. However, CBS at least mentioned McAuliffe:

Virginia Gov. Terry McAuliffe, a longtime close friend of Bill and Hillary Clinton, probably has as good a shot at 2020 as any Democratic governor does. McAuliffe likely would have likely worked in Hillary Clinton’s administration, but now that Mr. Trump is in the Oval Office, his options are still wide open in 2020. McAuliffe has had to govern in a divided purple state, where Republicans control the lower chamber of the legislature. But he’s mostly managed to navigate his time in Richmond unscathed, and has decent approval ratings above 52 percent, according to a Real Clear Politics aggregation of polling. The former Democratic National Committee chairman, legendary in Washington for his fundraising skills, represents an establishment wing of the Democratic Party.

Let’s hope he indeed does run against President Trump.

Now the really bad news…for the Chinese, not McAuliffe, Silly.

In hopes of winning permanent residency, the Chinese investors plowed their money into Greentech. Their investment was promised under a program that awards green cards to foreign-funded ventures that generate U.S. jobs.

Thus, the suit contends that the investors now face the threat of deportation from the U.S. as the Department of Homeland Security has determined that Greentech did not generate the number of jobs required to sustain the number of visas issued through the EB-5 program.

“Plaintiffs now face the prospect of having to uproot their families once again, with the expense and stress of deportation to China looming before them,” the suit says, accusing McAuliffe, Rodham, Greentech founder Charles Xiaolin Wang and others of running a “scam.”

Indeed this was a scam. Payola.

If Hillary Clinton had won, we wouldn’t be hearing about this. The Chinese would not be threatened to leave, regardless of the business not living up to its end of the bargain.

BREAKING OUT OF TEXAS- Finally!!! LIFE IN PRISON!
AFF