The Barack Obama legacy isn’t what he would like to think.

But the fact terrorism thrived in the Era of Obama. And yet another terror act was foiled, this one in Houston, Texas.

A man has been arrested on multiple charges after police located a small arsenal of guns on the top floor of the Hyatt Regency on Louisiana Street downtown, Houston police said.

Police at the hotel called for backup around 1:30 a.m. Sunday after they attempted to arrest the man for being intoxicated and trespassing. When help arrived, police noticed ammunition laying around the man’s hotel room, Lt. Gordon Macintosh with Houston police said.

The man was arrested for unlawfully carrying a weapon and trespassing. When investigators looked into his room further, they located an AR-15, a shotgun, a handgun and lots of ammunition, Macintosh said.

One doesn’t have to think back to far to understand the potential. Certainly Las Vegas comes to mind.

Hyatt commented on the incident, saying police were still investigating.

The safety and security of our guests and colleagues is our top priority, and consistent with the hotel’s prepared security plans, heightened measures are in place on New Year’s Eve. We are fully cooperating with authorities on an investigation, and further questions should be directed to the Houston Police Department. 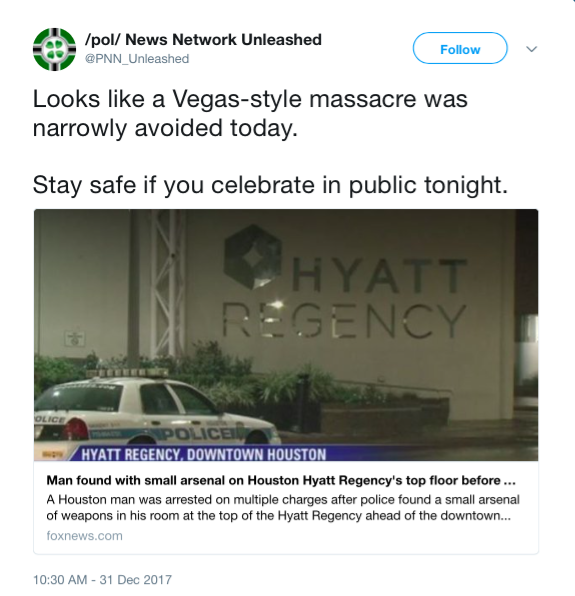 The normal questions that point to Muslim terror? The authorities won’t release the name of the person involved.

Sadly, less than a decade ago New Year’s was a relatively safe event, for most a mere formality. Believe it or not, there are places where New Year’s was canceled due to the cost of providing security.

In Germany, they set up “safe zones” for women, since they had so many sexual assaults by Muslim men last year.

Amazingly, Leftists want this to be the “new normal”.