Why President Trump Has NO WORRIES About Flynn Development

Stop Me If You Have Heard This Story Before:

A highly decorated, highly regarded, military officer trusted by the President becomes a key target by Democrats in an attempted witch hunt to bring down an administration.

Today General Michael Flynn has pleaded guilty to lying to the FBI as part of the scandalous Robert Mueller star chamber.  The irony is, despite contrary statements from the Obama Administration, Trump campaign people were being wiretapped!

As this Chicago Tribune story from last year demonstrates, the FBI exonerated General Flynn of any wrongdoing:

The FBI in late December reviewed intercepts of communications between the Russian ambassador to the United States and retired Lt. Gen. Michael T. Flynn – national security adviser to then-President-elect Donald Trump – but has not found any evidence of wrongdoing or illicit ties to the Russian government, U.S. officials said.

The calls were picked up as part of routine electronic surveillance of Russian officials and agents in the United States, which is one of the FBI’s responsibilities, according to the U.S. officials, who spoke on the condition of anonymity to discuss counterintelligence operations.

Nonetheless, the fact that communications by a senior member of Trump’s national security team have been under scrutiny points up the challenge facing the intelligence community as it continues its wide-ranging probe of Russian government influence in the U.S. election and whether there was any improper back-channel contacts between Moscow and Trump associates and acquaintances.

Both Flynn, a former head of the Pentagon’s intelligence agency, and Kislyak, a seasoned diplomat, are probably aware that Kislyak’s phone calls and texts are being monitored, current and former officials said. That would make it highly unlikely, the individuals said, that the men would allow their calls to be conduits of illegal coordination.

And then there was that pesky New York Times story from January 20, 2017 (ironically, Inauguration Day) that will not go away: 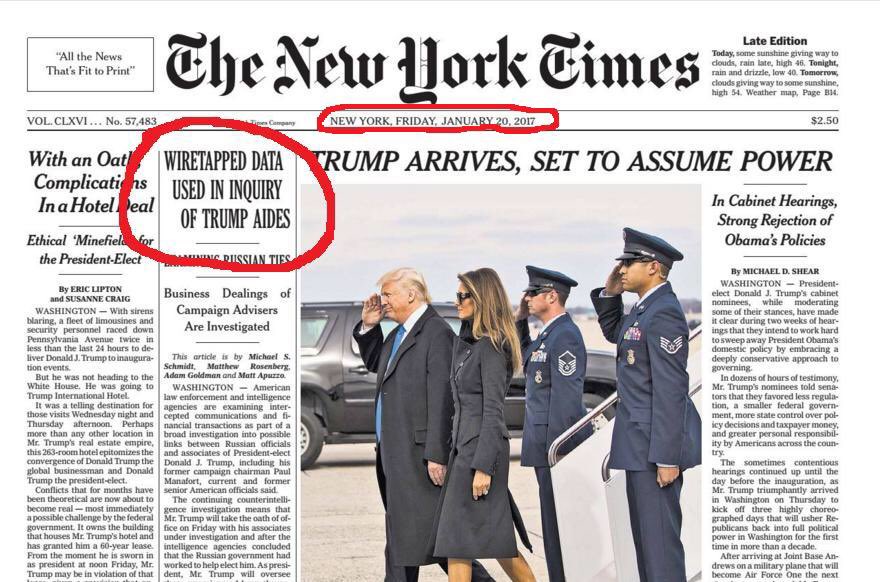 The continuing counterintelligence investigation means that Mr. Trump will take the oath of office on Friday with his associates under investigation and after the intelligence agencies concluded that the Russian government had worked to help elect him. As president, Mr. Trump will oversee those agencies and have the authority to redirect or stop at least some of these efforts.

It is not clear whether the intercepted communications had anything to do with Mr. Trump’s campaign, or Mr. Trump himself. It is also unclear whether the inquiry has anything to do with an investigation into the hacking of the Democratic National Committee’s computers and other attempts to disrupt the elections in November. The American government has concluded that the Russian government was responsible for a broad computer hacking campaign, including the operation against the D.N.C.

The counterintelligence investigation centers at least in part on the business dealings that some of the president-elect’s past and present advisers have had with Russia. Mr. Manafort has done business in Ukraine and Russia. Some of his contacts there were under surveillance by the National Security Agency for suspected links to Russia’s Federal Security Service, one of the officials said.

But there is a one problem…

It is illegal for the US Government to wiretap American citizens in such a manner.

According to the ACLU website concerning spying on Americans:

Government eavesdropping on Americans is an extremely serious matter; the ability to intrude on the private realm is a tremendous power that can be used to monitor, embarrass, control, disgrace, or ruin an individual. Because it is so invasive, the technology of wiretapping has been subject to carefully crafted statutory controls almost since it was invented. Ignoring those controls and wiretapping without a court order is a crime that carries a significant prison sentence (in fact, criminal violations of the wiretap statute were among the articles of impeachment that were drafted against President Nixon shortly before his resignation).

Point #1: Electronic surveillance by the Government is strictly limited by the Constitution and Federal Law

The law on surveillance begins with the Fourth Amendment to the Constitution, which states clearly that Americans’ privacy may not be invaded without a warrant based on probable cause.

The right of the people to be secure in their persons, houses, papers, and effects, against unreasonable searches and seizures, shall not be violated, and no warrants shall issue, but upon probable cause, supported by oath or affirmation, and particularly describing the place to be searched, and the persons or things to be seized. (emphasis added)

The US Supreme Court (US v. Katz 389 US 347) has made it clear that this core privacy protection does cover government eavesdropping. As a result, all electronic surveillance by the government in the United States is illegal, unless it falls under one of a small number of precise exceptions specifically carved out in the law.

A person is guilty of an offense if he intentionally-

In other words, the NSA can only spy where it is explicitly granted permission to do so by statute. Citizens concerned about surveillance do not have to answer the question, “what law restricts the NSA’s spying?” Rather, the government is required to supply an answer to the question “what law permits the NSA to spy?”

Point #2: There are only three laws that permit the government to spy

There are only three laws that authorize any exceptions to the ban on electronic eavesdropping by the government. Congress has explicitly stated that these three laws are the exclusive means by which domestic electronic surveillance can be carried out (18 USC, Section 2511(2)(f)). They are:

Title III and ECPA. Title III and the Electronic Commnunications Privacy Act make up the statutes that govern criminal wiretaps in the United States.

FISA. The Foreign Intelligence Surveillance Act is the law that governs eavesdropping on agents of “foreign powers” within the United States, including suspected foreign terrorists.

So even President Obama was bound by the rule of law.  But we all knew he flaunted around the Constitution for eight years. 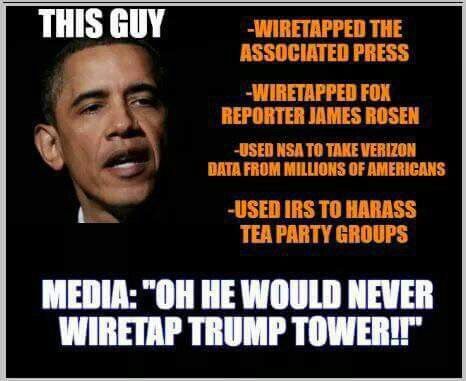 And despite all of this proof of past patterns of behaviors, the Democrats, mainstream media, and the DC swamp was giddy with joy when the Justice Department erroneously declared that no wiretapping had ever taken place.

Or perhaps the ‘fix’ was already in.

In a page right out of the 1950s, former FBI Director Robert Mueller’s crusade to avenge his BFF James Comey has behaved questionably from the start.  Conflict of interest aside, the Mueller investigation has drawn the ire of many legal scholars.

Neither Clinton nor Trump should be subject to special counsel. A non partisan commission should investigate Russian attempts to influence US elections. https://t.co/MkxCfyKzrg

Democrats are already straining themselves trying to suggest that Flynn’s plea is just the beginning and that there is more to come. But as far as Flynn is concerned, that is unlikely. It is just wishful thinking on their part. It’s not as though he pleaded guilty only to leave unresolved matters for later.

Once the dust settles, the Democrats and their media allies will realize that there is nothing more to this story than what Flynn has admitted to. Commentators are saying Flynn has agreed to cooperate, as if that is something new. The fact is, there was never a time when Flynn wasn’t cooperating. He has been a cooperating witness since special counsel Robert S. Mueller III’s investigation began.

The Democrats won’t admit it, but they are throwing in the towel on collusion. Their only choice now is to prop up the convoluted claim of obstruction of justice, and that could go on forever. The ordeal may be bothersome for the White House, but it won’t be fatal.

So why then would General Flynn agree to plead guilty?

According to CNN, the members Mueller’s Democrat-led team were targeting Flynn’s son:

Interviews conducted by special counsel investigators have included questions about the business dealings of Flynn and his son such as their firm’s reporting of income from work overseas, two witnesses interviewed by the team told CNN. The Foreign Agents Registration Act (FARA) requires people acting as agents of foreign entities to publicly disclose their relationship with foreign countries or businesses and financial compensation for such work.

Flynn Jr., who served as his father’s chief of staff and top aide, was actively involved in his father’s consulting and lobbying work at their firm, Flynn Intel Group. That included joining his father on overseas trips, such as Moscow in December 2015. During that trip, Flynn dined with Russian President Vladimir Putin at a black-tie gala for the RT television network, which US intelligence views as a Russian propaganda outlet.

The Left’s Quest For “The Impossible Dream”

Remember a decade ago when then-candidate Obama went to Berlin?

While there, he channeled his inner ‘Kennedy’ and ‘Reagan’ with his “Yes We Can” speech.  Though deemed inappropriate for a candidate to do such a thing at the time, very little was made of it.

As anchor Scott Pelley reported on the CBS Evening News in May 2012:

President Obama was overheard on an open mic giving outgoing Russian President Medvedev a candid political assessment of his ability to deal with relations between the U.S. and Russia, saying he would have more flexibility after the election.

And there was this exchange between former-President Obama and Mitt Romney during the third Presidential debate?

In hindsight it turns out Governor Romney was right on all counts.  Troops should have stayed in Iraq, and Russia was a bigger threat.  Was the Obama Administration colluding with Russia to win in 2012?  Well, did they Mr Mueller?

Regardless, the media is eagerly anticipating the ax to fall on the Trump Administration:

Except…Brian Ross got it wrong!

ABC said later in an updated report that Flynn will say Trump asked him to make contact with Russia “initially as a way to work together to fight ISIS in Syria.”

This entire escapade comes down to the fact Democrats cannot deal with the fact that they lost in 2016.

The mainstream media is still in denial that could have been so wrong.  Lastly, the DC establishment is rebelling against an outsider who is unwilling to play the game by their long-established rules, is now running the entire show his way.  They need the justification.  They need their pound of flesh.

And yet this is the option everyone in the political classes of America’s eastern corridor have placed their bets on. Because its all they got.  So, when did it become illegal to just ‘talk’ to the other side?  After all, its not like Trump ever sold uranium to the Russians for campaign donations, or paid a foreign operative to coordinate with Russian spies to dig up secrets on political opponents to use against them in a major upcoming election!

Because then that would be illegal…and worth investigating.