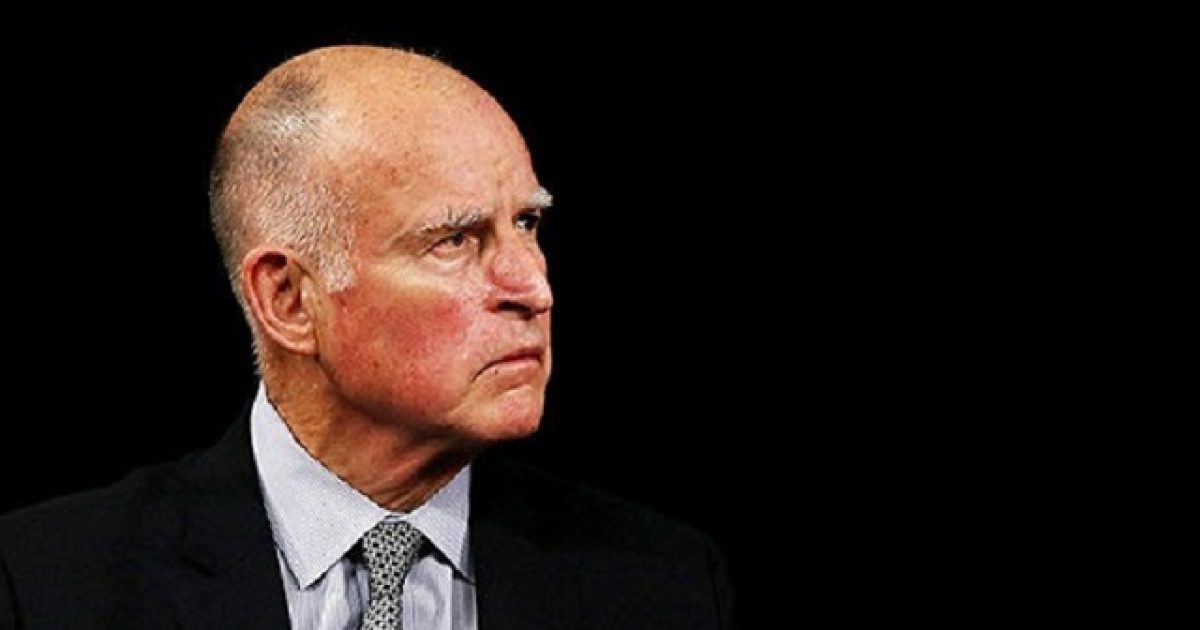 California’s top elected official is nothing more than a common criminal. Check out this scenario.

In America, we are taught to help people, even in the People’s Republic of California. So imagine a man comes to your doorstep, hungry and disheveled, possibly homeless. Your humanity kicks in, so you offer him leftovers from your family dinner, and a blanket to keep him warm.

He seems harmless enough, so you extend your hospitality, allowing him to sleep in the garage for the night. Then things go bad.

Your neighbor recognizes the man. As it turns out, the man is a fugitive, wanted for the murder of a young girl. Bad idea, but we will get back to that.

Your neighbor calls police, who shortly thereafter show up to arrest the wanted criminal. But now you find yourself in hot water too.

You’re charged with aiding and abetting.

Too bad you’re not a Clinton. Because when you meet with the district attorney, you tell him you had no idea the homeless beggar was a criminal. Then, he explains the old legal axiom: ignorance of the law is no excuse.

But now the twist.

The scenario described is that of so-called “sanctuary cities.”

America’s cities are overrun at times with illegals knocking at the door, metaphorically. Certainly most are just hungry and cold or wet. However, many others carry much more baggage, as they are hardened criminals, even murderers and rapists.

Statistics bear this out. Leftists know far too often illegal immigrants commit serious crimes such as robbery, rape and murder. Yet, some states and other municipalities aid and abet these criminals, even offering everything from housing, medical care, and cell phones.

Some states passed out voter registration cards, the real reason they want them here. Our government creates rules they refuse to follow.

San Francisco even paid their criminals outrageous sums of money because of loopholes in their laws after officials turned one criminal alien over to ICE. Apparently following federal law violated their local moronic ordinances. At what point to we stop the madness?

President Trump starting cracking down on sanctuary cities his first day in office.

His passion for the issue emerged on the campaign trail when the murder of Kate Steinle sparked a call for action. Nevertheless, a year after the election, California proves leftism is still alive and well when they let her killer go free.

Now, it’s time for Trump’s hard stance to make a difference by holding politicians accountable when they fail to obey the laws set out to protect our country. And for legislators like Jerry Brown, this could spell trouble.

As the Conservative League reports:

During an interview with Fox News, acting ICE director Thomas Homan declared that “it’s time to start arresting politicians in sanctuary cities and charging them with crimes.”

“That is a violation of 8 USC 1324. That’s an alien-smuggling statute. I’ve asked the Department of Justice to look at this,” he said. “Can we hold them accountable? Are they violating federal law?”

Pressed by Cavuto on what he’d do if the Justice Department decides that federal law is being violated, Homan suggested that politicians be held “personally accountable.”

In October, Brown signed a bill making California the nation’s first “sanctuary state.” The law, which went into effect on January 1, “bars law enforcement officers in the state from arresting individuals based on civil immigration warrants, asking about a person’s immigration status or participating in any joint task force with federal officials for the purpose of enforcing immigration laws,” according to the San Francisco Chronicle.

“The state of California better hold on tight,” he told Cavuto. “More citizens are going to die because of these policies.”

Eventually, sanctuary cities will fall one by one.

Trump’s policies promote common sense and the well-being of all Americans. And when he decides to tackle comprehensive immigration reform, you can bet he will go after rogue legislators who put Americans in harm’s way.