I visited Paris last year on business. The place is a sh*thole.

I lived in Paris for a few months, decades ago. Admittedly, the allure of the city biased my feelings at the time.

It was my first visit, and the city was much newer. However, there is little doubt that Paris was once considered one of the most beautiful and romantic cities in the world.

Put away those old memories, because Paris is very different.

According to the Voice of Europe, 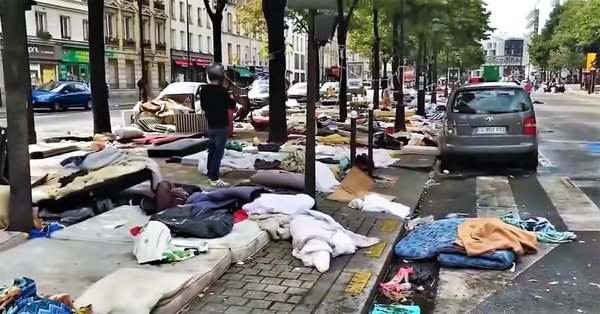 Last year more than 100,000 migrants requested asylum in France, an increase of 17 per cent compared with 2016 and the highest ever recorded

France is a large country and its ability to temporarily house migrants shouldn’t be a big problem, in theory. In practice, however, migrants don’t migrate once in France, ironically, but concentrate; the best example being the infamous Calais camp or “Jungle”, from where they seek a way of entering the United Kingdom.

Besides that, a lot of migrants are also concentrated in France’s larger cities such as Bordeaux, Paris and Lille. These cities already had large migrant populations, a large underclass and probably more than a few no-go zones as well.

After the Calais jungle camp was demolished, things became worse. Mayors of seven major French cities rang the alarm because they could not help and accommodate the endless stream of migrants.

Look at that graphic closely, and you see this filth stretches entire blocks.

When I was in Paris, I was met by my adopted son, from Toulouse and his fiancee, from Normandy. They had returned from Vietnam, where they taught French.

As we gallivanted around Paris dusting off memories, we found ourselves disgusted with how the city looked. But more how it “felt”. Gone was the feelings of splendor and excitement. The place felt like a city in captivity.

Honestly, the influence of the immigrant culture sickened me. The city lost its Parisian ambiance, and offered something more brooding. We wrote of Paris’ “no go” zones a while back:

If you plan to visit France, you’d had better take a good map.

In America’s bad neighborhoods, you will likely be robbed, even take a bullet. But in France’s “difficult neighborhoods,” you could get your head chopped off.

In France, there are over 700+ no-go zones, better defined as areas where the Muslims are so entrenched, French laws essentially no longer apply.

This isn’t just a French problem as it might appear, as these groups are spreading like a bad rash.

France appears to have been the template for how the Muslims would organize, lobby, create, then sever social and cultural connections to their new “host” country and create an almost mini-caliphate.

So for those trying to gain traction from the sh*thole comment, good luck.

The world has become a sh*thole for the most part. Because wherever Leftists are in charge lies the epicenter of a sh*thole.

No country, state, providence, city, region is immune, not even the great United States. But what President Trump accomplished is to bring attention to the growing problem of sh*tholes. And he has begun eradicating American sh*tholes, in as much as one man can do this.

I suggest Europe, including Norway heed the president’s advice and recognize Leftism for what it is: a destroyer of cultures.

We documented how police were chased out of a “no go” zone in Paris, a regular occurrence.

The caliphate will reside in America soon, if the leftists get their way.

As you know, Europe has hundreds of “no go” zones. These are places where indigenous citizens dare not go. And in fact, neither can the police.

These places are run by radical Muslims, who practice their laws without regard for existing law. Because in Islam, there is no other law but Islam.

So watch as a Muslim mob chases a police car out of one such “no go” zone.

NOTE: this is a different video than presented originally. Twitter banned the account of the person who posted the other video.

This scenario happens all over Europe.