Howard Cosell would have been just as shocked at this latest political development, as he was in the Frazier-Ali fight.

In a political shocker, the California Democrat Party has turned their backs on longtime establishment stalwart current US Senator Dianne Feinstein. 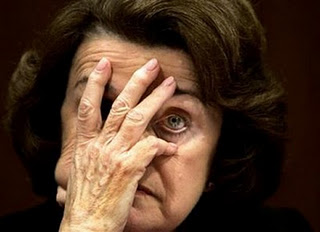 State Senate leader Kevin de León, won the support of 54 percent of the delegates at the state party convention here this weekend, short of the 60 percent needed to secure the party endorsement. Feinstein received only 37 percent of the votes.

The rebuke of Feinstein by the party delegates comes even though the 25-year incumbent has led polls by wide margins and has received broad support from state party luminaries like Sen. Kamala Harris and House Minority Leader Nancy Pelosi.

The results were a sign of discomfort among many liberals who believe Feinstein should do more to challenge President Trump — and of de León’s strong connections to the party’s activist left flank. The endorsement contest was a “test of the establishment’s authority and power,” de León chief of staff Dan Reeves said before the vote.

Most California voters say they don’t know enough about de León to have an opinion about him. But he had a much more active presence than Feinstein at the convention, working the crowds and hustling between caucus meetings in white sneakers on Friday night.

Feinstein’s campaign still has a huge financial upper hand over de León, as well as the built-in advantages of incumbency. Before the vote, Feinstein’s chief strategist Bill Carrick played down expectations, noting that “it’s very hard to get to 60 percent for anybody.”

The New Kid on the Block

Current Speaker Pro-Tempore of the State Senate, Kevin de Leon comes with his own baggage history.  Starting his career as a teacher, de Leon began his political career as a community organizer in 1994 opposing Proposition 187, (does he sound familiar?).  Last year Senator de Leon personally led the effort to make California a ‘Sanctuary State’, as CBS News explains:

California Democrats approved a “sanctuary state” bill Saturday that would limit how local and state police can interact with federal immigration agents.

The legislation is the latest effort by Democratic lawmakers in California, home to an estimated 2.3 million immigrants without legal authorization, to create barriers to President Trump’s campaign pledge to step up deportation efforts. They’ve also approved money for legal assistance and college scholarships for people living illegally in the U.S., and made it harder for businesses and government agencies to disclose people’s immigration status.

Why does State Senator de Leon have such a passion for shucking federal laws and protect illegal immigrants?

Because by his own admission, HALF of Mr. de Leon’s family are undocumented and are residing illegally in the country. CBS News—Los Angeles reports:

California Senate Leader Kevin de Leon made the claims during testimony before the Senate’s Public Safety Committee for SB54, a bill introduced by De Leon that would create a statewide sanctuaryfor immigrants living in the country illegally.

YES!  Kevin de Leon is admitting that he was complicit in several felonies including identity theft!

But then this is California, and he is the leader of the State Senate supermajority, so who would ever bring charges against him?  The State’s Attorney General is too occupied intimidating 89-year-old GOP great-grandmothers to care.

So, when you’re the State Leader of California and you are breaking federal laws, create ‘state law’ to make yourself legal thus creating a further political rift in the country.

Since the signing of AB 60 last year, over 800 thousand undocumented residents have received California driver’s licenses. The concerns about identity fraud has now expanded into full scale manipulation on a statewide level.  Fox News explains:

California this spring will begin automatically registering adults who obtain or renew a driver’s license to vote, leading to some concern non-citizens and immigrants illegally living in the state could find it easier to cast ballots in elections.

The issue involves the latest implementation of the California Motor Voter Act, which beginning in April will send information about drivers to state voter rolls unless the license holder opts out, or is not eligible. The automatic registration component of the process has some concerned about potential fraud.

A California official pushed back against those concerns, telling Fox News those who must apply for or renew a special license classification – the AB 60, named after the bill that gave illegals the right to apply for licenses in 2015 – would be excluded from the voter notification process.

A California state senator accused of sexual misconduct resigned Thursday just ahead of a possible vote to expel him, delivering a scathing resignation letter that called the investigation a farce and underscored the Legislature’s struggle to respond to the #MeToo movement.

Democratic Sen. Tony Mendoza of the Los Angeles area said he may still run for the seat this fall, putting his party in an uncomfortable spot. His resignation letter takes aim at the leader of the Senate, a fellow Democrat and his former roommate in Sacramento who was leading the effort to kick him out.

The Senate could be challenged again soon. An investigation has concluded into Sen. Bob Hertzberg, whom at least three female colleagues say made them uncomfortable with hugs. The findings have not been made public.

End of an Era?

After 25 years in the US Senate dating back to 1992, Dianne Feinstein had enjoyed immense popularity over the years, and was once viewed as politically invulnerable.

But that was then, and this is 2018.  According to a recent Roll Call article:

Six years after receiving the most popular votes in any senatorial election in U.S. history, the five-term Democrat has seen sliding favorability ratings as liberals in the Golden State hammer her for not being tough enough standing up to President Donald Trump.

Six months before the 2018 primary, just 41 percent of likely voters in California — a plurality — back the 84-year-old Feinstein, a new poll from the UC Berkeley Institute of Governmental Studies found.

Twenty-seven percent of those polled back Feinstein’s closest challenger so far, Los Angeles-based state senator Kevin de León. A considerable 32 percent said they were undecided, which some experts said could open the door to an insurgent campaign from a political outsider. 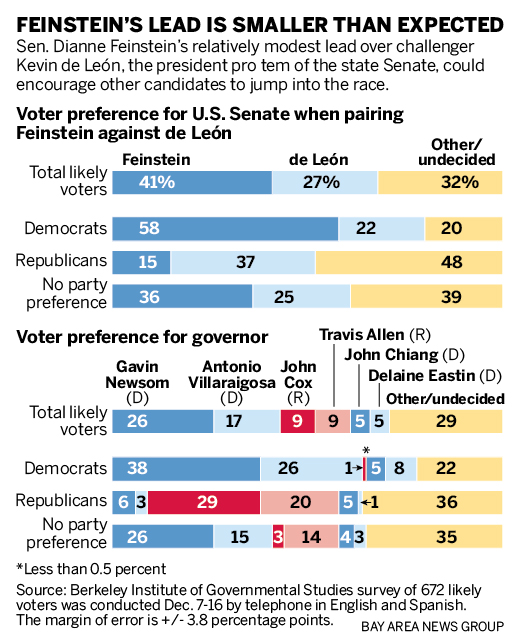 And the numbers only get more-grim for Di-Fi.

As Democratic Sen. Dianne Feinstein contemplates a 2018 bid for reelection, a new poll has found that 50% of California’s likely voters think she shouldn’t run again.

Feinstein, 84, has come under increased pressure from members of California’s left, many of whom were infuriated when earlier this month she called for “patience” with President Trump and refused to back demands for his impeachment.

Still, the poll found that Feinstein remains popular. More than half of likely voters — 54% — approve of the job she’s doing, compared with 38% who disapprove.

Feinstein has her most challenging road ahead to date: dropping poll numbers; only one-third of the California voters approve of her job performance; half the state electorate think its time for her to retire.

Complicating things further, the demographics of the state have drastically changed since 1992.

Two major California unions, SEIU and State Nurses Union, have endorsed de Leon; her former US Senate colleague also thinks she’s in political trouble; and she’s trailing in raising money to all of her Democrat opponents.

But, this…is…‘Dianne’ Feinstein, and  a Politico article earlier this month tells a different tale:

Though a third of likely voters remain undecided, the poll reflects the long odds facing de León as he seeks to unseat California’s senior senator. Feinstein, a centrist Democrat, is polling ahead of de León by wide margins among Democrats, independent voters, men, women and people of all racial and ethnic groups.

Feinstein, at 84, is seeking a fifth full term in the Senate, while de León remains largely unknown. Nearly two-thirds of likely voters have either never heard of him or don’t know enough about him to form an opinion, according to the poll.

The race — along with California’s gubernatorial contest — will top the ballot in a heavily Democratic state where voters rate immigration as the most important issue for the governor and lawmakers to work on this year.

Feinstein also need not ever worry about fundraising.

In addition to being married to Democrat billionaire investment banker Richard Blum, Feinstein started 2018 with $10 million campaign funds already in the bank, whereas de Leon had only reported $360,000.  If more money is needed, Feinstein’s marriage to Blum makes her one of the wealthiest members of the US Senate.

The Loyal Opposition?  This is California!

California Republicans are on the verge of being shut out statewide for the second election cycle in a row.

Already outnumbered 39-14 in the state delegation, GOP House incumbents are finding it harder than ever to raise re-election money in a strong Democratic state that’s trending even bluer.

Of the 10 Republicans targeted by the Democratic Congressional Campaign Committee in this year’s midterm elections, five of the GOP incumbents raised less money than their Democratic opponents in the final quarter of 2017 and two others abruptly announced their retirements rather than face an uncertain re-election.

Many of those districts feature two or more well-funded Democrats who will be struggling to be one of the two top finishers in the June 5 primary and advance to the November election.

As previously reported, Silicon Valley tech leaders, as well as individual mega-donors like Mr. Blum, George Soros, Tom Steyer, and the spotlight of the Hollywood elite, and the volunteers brought in by organized labor unions (to name a few) donate millions to down-ticket Democrat races to effect liberal change across the country from the top down.

It is a pattern of success that Democrats are hoping to repeat nationally with the goal of retaking Congress in 2018.

Yet after two-decades of continual loses, and winning only one statewide race with a candidate NOT named Schwarzenegger, California Republicans are unable to stop the political hemorrhaging.

So why did Republicans plunge from dominance to rough parity and finally into the abyss of virtual irrelevance?

A popular theory is that when then-Gov. Pete Wilson and other Republicans embraced Proposition 187, a 1994 measure aimed at eliminating public benefits for undocumented immigrants, they sowed seeds of decline by alienating the fast-growing Latino community.

It was and is a factor since more than 25 percent of Californians were born in another country.

But the GOP also lost ground in middle-class suburbs as rising environmental consciousness and hot-button issues such as same-sex marriage and abortion turned baby boomers, Gen Xers and millennials against the party.

In addition to these megatrends, the shift to a post-industrial economy played a role. When the Southern California aerospace industry collapsed after the end of the Cold War in the 1990s, for instance, the region experienced a massive out-migration of skilled workers who may have been registered Democrats but often voted as “Reagan Democrats.”

Coupled with continued in-migration from other countries, the outflow shifted Los Angeles County, with a quarter of the state’s population, from roughly neutral in top-of-the-ticket elections to overwhelmingly Democratic.

Republicans continue to dominate the state’s rural regions and do fairly well in local governments – even in otherwise blue communities. But the decline in registration indicates that they haven’t hit bottom yet.

Regardless it will take an Olympic miracle for a Republican to win this Senate seat in 2018.  Larry Sabato’s Crystal Ball list this race as a SAFE Democrat seat.

There are eight announced Republicans in the US Senate race, none of whom have high name ID, nor have raised significant campaign funds to be able to compete in California’s expensive media market.