When I’m talking beard, I’m not talking about Reggie Love, Obama’s “traveling companion” for long walks on the beach.

According to Black Loop, the black internet went crazy over an Obama beard.

Beard gang…you’ve seen it by now. No, it’s not a real gang — but simply a hashtagged collective of men showcasing facial hair. However, throughout our prosperous years of basking under the Obama administration, America along with the rest of the world only witnessed Barack clean-shaven. For the most part, even though some of his hair was graying, he still maintained quite the youthful countenance on his face. BUT NOW, THEY’RE CALLING HIM PRESIDENT ‘ZADDY’ Note: Be careful. Michelle looks like she can throw hands. Don’t forget, she’s from Southside. Anyway, via Twitter, females (and some males) are going crazy over the newly-released photo Mr. Obama. You can check it for yourself below.

Apparently black people still look to something to cling onto for America’s first black gay president.

It seems black Leftists disregard the 16 million mostly blacks Obama put on food stamps. And let’s not forget all those brothers Obama left in prison. The man flooded America with Latinos, so much so that Crips and Bloods look like Boy Scouts compared to the MS-13 gangs.

Blacks lost jobs, businesses, houses, and dignity under Obama, but the thought of him growing a beard re-energizes these black clowns, and they now want more of him?

Personally, when I heard of the rumor that Obama might have a beard, I pictured him in a cave in Afghanistan at a family reunion.

Not quite as sexy?

I’d be willing to bet there is a fashion designer looking into this very vest for next year’s Paris Fashion Show.

What’s funny about the buzz behind the Obama beard article is that Leftists still cling to liking something about Obama. They glorify his looks, because they certainly can’t glorify his policies.

I look at him and I can see him playing Bond, James Bond.

We agree that Obama could play Bond…Junk Bond. 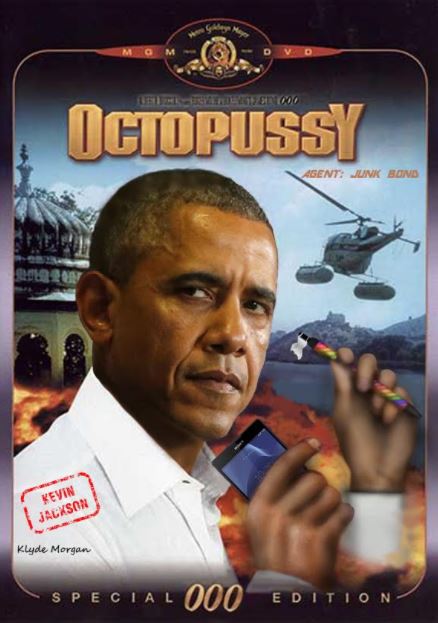 For those who want to know, the beard isn’t exactly real.

Barack Obama spoke on his beard-growing inability years ago. According to Huffington Post, Obama says he simply “can’t” grow facial hair at all. Instead, as mentions Mr. Obama, he only gets “whiskers.”

Beard be damned, Obama still may have been the best jihadist in history.

Who else could high-tail it from a war and leave the enemy, ISIS, over $1 billion in case and U.S. armaments? Junk Bond, Bitches.

And who could trade 5 Taliban leaders for one white boy traitor, and get away with it? Not Shaft! Bond…Junk Bond.

Then, who could ship $400 million in various currencies to Iran in the dark of night, and claim it’s because the bank wasn’t open. Damn right! Junk BOND!

Under Obama, terror grew exponentially. So he don’t need no stinkin’ BEARD!