From Disney Princess to Disney Prostitute

The Left is on a mission to defile everything good and wholesome. And their most recent attack was against Walt Disney princesses.

In what is now a deleted tweet by Planned Parenthood, the baby-killing organization made several requests on which types of Disney princesses the films should come up with next. 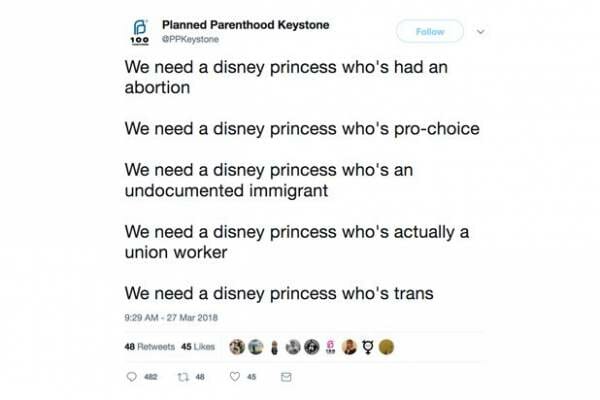 The Wrap notes the tweet was deleted about two hours after it was posted. But in that short amount of time the tweet did not go unnoticed.

The entire tweet was captured before its deletion by Alex Pfeiffer, associate producer for Tucker Carlson Tonight.

We need a Disney princess who’s had an abortion

We need a Disney princess who’s an undocumented immigrant

We need a Disney princess who’s actually a union worker

We need a Disney princess whose trans.

Apparently if Leftists rewrote Disney classic characters, Snow White would be knocked up by one of the seven dwarfs.

Then, we would see her on an episode of Maury whereby they try to determine which of these dwarfs actually “baby-daddied” the child. Of course, Snow White would be antagonistic to the audience, saying having sex with seven brothers “is how I rolls”.

Or what of the Cinderella story? You can bet she would be a trans-sexual who was abused by her very conservative stepmother and stepsisters. Cinderella would run away with Prince Charming, who in this fairy tale is a sex-trafficker named Lucius.

Once Cinderella breaks free from Lucius’ hold, she abandons her baby, and moves in with an illegal migrant worker, and helps him in his plight to unionize day laborers.

When you wish up on star…Dreams will take you very far.

Additionally, as Amanda Prestigiacomo asked from the Daily Wire:

“There are so many unanswered questions about the prospects of Abortion Princess, though. Will the devices used to perform abortions be included, like forceps and the manual vacuum aspiration used to dismember and suck out the child?

Will we get a breakdown of the costs of the procedure? How about the value PP got for the ‘fetal tissue’? Will the physical and emotional scars so often left for the women who’ve had an abortion be acknowledged?”

This certainly makes on wonder about the other potential to rewrite Disney and other iconic children’s characters.

I can see an abortion Barbie, complete with bloody baby, and a release to sell the baby parts.

And what about Wife-beater Ken? Ooo, and what about Handsome Harvey the Sex Abuser. That doll would come with a casting couch.

All the female dolls of Disney and others would have Lesbian counterparts. And they would be renamed for iconic feminists. The Chelsea Handler Barbie: Super Slut Edition. And what of the Hillary Clinton Barbie. That one would just scream profanities at Bill Clinton and give excuses for why she lost to Trump.

But why should the Left stop at dolls and Disney characters. Let’s just go after anything sacrosanct.

Slate magazine published a scorching review of the Hallmark network and their 25 days of Christmas;

“They brim with white heterosexuals who exclusively, emphatically, and endlessly bellow “Merry Christmas” to every lumberjack and labradoodle
they pass. They’re centered on beauty-pageant heroines and strong-jawed heroes with white-nationalist haircuts.”

And as Todd Stearns of Fox News noted from the Slate’s article:

There were complaints about the lack of gay people and feminists and Muslims in Hallmark Channel’s movies. Slate also whined about what it called the network’s “42 hours of sugary, sexist, preposterously plotted, plot hole–festooned, belligerently traditional, ecstatically Caucasian cheer.”

How awful is that!? Hallmark paying tribute to heterosexuals of the worst kind…WHITE ones!

As we learned during the Era of Obama, America is too white, hetero, and male. So, The Hallmark Channel is TOO CONSERVATIVE, at least for Leftists.

Now we learn the left feels the same about the Disney classics.

What is this obsession of the left to turn everything that is wholesome and loved by families for decades into something sleazy?

It’s bad enough leftist organization like Planned Parenthood already teach young children in kindergarten how to become a transgender. They even say that kids can choose ones “race”. As Fauxchahontas Elizabeth Warren said, she always “felt” like an Indian.

Is there a line crazy leftists won’t cross?

Right Report
No one’s willing to say it, but there are some who just need to die for what they’ve done to us and our country
DC Dirty Laundry

US Sends 90 Tons of Cold, Hard Russia Deterrents to Ukraine
Flag And Cross