You know the saying, “Things have gone to the dogs!”?

What I find most interesting about the Stormy Daniels story is how the Left doesn’t see how this will backfire.

Forget that Trump seems impervious to their lies and false narratives. Because even if true, the Daniels story is doomed.

First, it’s retread of the campaign. The Left tried “bimbo eruptions” to taint Trump before. It didn’t work then, and it won’t work now.

Second, the Left’s history on presidential bimbos doesn’t leave them much credibility to attack Trump. So the longer the Left try this silly course, the worse things get.

Third, Conservatives aren’t buying the story thanks to Leftists. If the Clinton Era did anything, it conditioned even Conservatives to loosen up the moral compass a bit.

Finally, Democrat voters see the hypocrisy. The Left learned nothing from the campaign. The Democrats who abandoned Obama and Hillary Clinton to vote for Trump did so for the very reason the Democrats pursue the Stormy Daniels story. These Democrats recognize how duplicitous their party is, a party of double-standards.

With the story getting essentially no traction, the Democrats have predictably added a new layer. Now Stormy Daniels has backup. And from a “credible source”.

According to The Daily Mail, 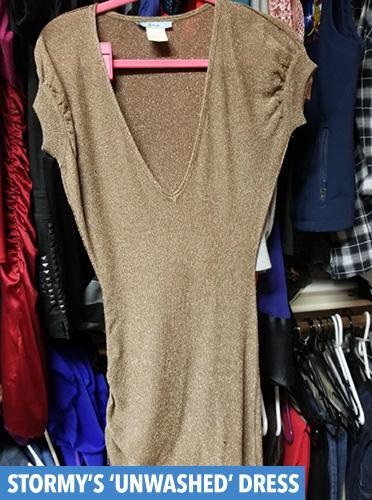 A friend of Stormy Daniels has backed up the adult film star’s claims that she still has the dress she wore on the night she is said to have slept with now-President Donald Trump.

Daniels – real name Stephanie Clifford – has previously said that she kept the gold sparkly dress from the 2006 encounter after a golf tournament at Lake Tahoe ‘in pristine condition’.

That’s right. The Left have their own version of the Lewinsky scandal.

Except that Donald Trump wouldn’t have been president when he had sex with a full-grown woman. Contrast that Bill Clinton was president, and routinely had “non-sex” with Monica Lewinsky, a 21-year old intern at the White House.

And isn’t it fitting that the dress supposedly being hidden by Stormy Daniels is said to be in pristine condition, in the event she would need it to preserve her honor!?

And the dress is GOLD! How Trumpian!

Fake news champions CNN offered a Globe-like perspective on the revelation of the gold dress:

‘All I know is that Stormy still has the dress that she wore from that night,’ Ms Evans told CNN’s Jim Sciutto.

‘Maybe a keepsake, maybe it’s because it’s actual proof,’ she added.  ‘I can only speculate the things that may be on that dress, especially if it’s never been washed.’

There is no “blue dress” in this Stormy Daniels thriller. This story has all the suspense of the Russia Collusion narrative.