Trump’s Popularity Skyrockets on Stormy Past

No matter what Leftists throw at President Trump, he just grows stronger.

Instead, thousands of people took to social media to point out the obvious. This woman is clearly living in an altered state of mind.

Some people questioned Cooper’s interview skills, as he didn’t even question the dazed and confused expressions.

Why didn’t Anderson Cooper ask Stormy Daniels if she was coked up during that 60 Minutes interview? Pupils this dilated are not normal. WTF? pic.twitter.com/g6lqlfUZgF

Apparently once white trash, always white trash. Because Stormy Daniels is about to feel the wrath of Trump.

Her breach of contract will cost her dearly. As Bloomberg explains:

Stephanie Clifford may face more than $20 million in damages for violating a “hush agreement” that requires her to remain silent about an affair she alleges she had with President Donald Trump in 2006 and 2007.

The potential damages against Clifford, an actress in adult films who uses the stage name Stormy Daniels, were disclosed Friday in a filing in federal court in Los Angeles by Essential Consultants LLC, an entity that was set up by Trump’s personal lawyer, Michael Cohen, in 2016 to pay her $130,000 in exchange for her silence.

The company moved the lawsuit, filed by Daniels last week in California state court against Trump, to federal court, saying that neither Daniels, Trump nor the LLC are California residents and the amount of damages exceeds the $75,000 minimum for a case to proceed in federal court. Trump supports the transfer of the case between courts, according to Essential Consultants’ filing. 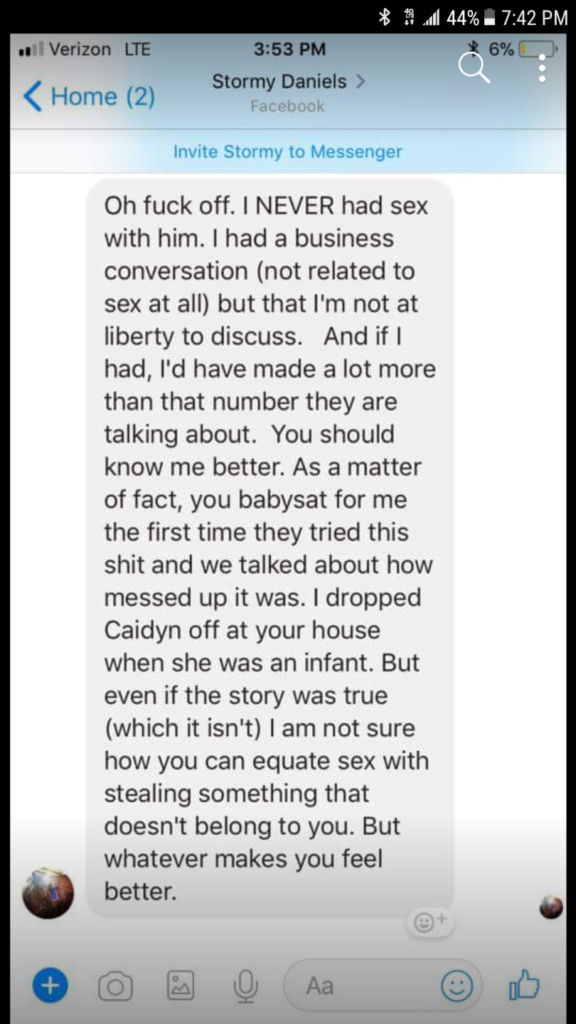 Stormy does have her credibility issues. Just a few months ago Stormy adamantly denied ever having sex with Trump.

The confidentiality agreement appears to be related to a business matter, as Daniels put it, “not related to sex at all”.

In fact, her so-called friends were quick to sell Stormy out.

Stormy Daniels denied the affair in her inner circle. In fact, she seemed disgusted by the accusation. Just take a look at this message Stormy sent this message to her friend, and despite the fact that her “friend” isn’t a Trump supporter, she decided to share Stormy’s message so the public can make an informed decision. Just read for yourself.

Sadly, the democrats are all out of leaders. If all they’ve got is Stormy Daniels and Hillary Clinton, I’m guessing the mid-term elections won’t end in their favor. Of course, when the democrats lose big, they’ll act just as surprised as they were on that fateful November night in 2016.

In fact, his popularity is at an all-time high and continues to climb.

Even CNN is forced to admit Trump’s administration is going strong.

President Donald Trump’s approval rating is now up to 42 percent, according to a new CNN poll.
The poll shows that approval for the president has jumped seven points overall since February. Both Republican and independent approval have jumped six points.

Eighty-six percent of Republicans and 41 percent of Independents now approve of the way Trump is handling his presidency.
According to the poll, Trump trails only Ronald Reagan and Barack Obama by four points at this point in their first terms.