CNN and other Leftists “media” outlets got more bad news than just the daily butt-kickings on Twitter from President Trump.

More than 3-in-4 of 803 American respondents, or 77 percent, said they believe that major traditional television and newspaper media outlets report “fake news,” according to a Monmouth University poll released Monday, marking a sharp increase in distrust of those news organizations from a year ago, when 63 percent registered concerns about the spread of misinformation.

Among those, 31 percent said they believe those media outlets spread “fake news” regularly, and 46 percent said it happens occasionally.

The findings also showed Americans diverging on what constitutes “fake news,” with 65 percent saying it applies broadly to the editorial decisions outlets make over what topics to cover and 25 percent more narrowly defining it to apply only to the spread of factually incorrect information.

No matter how you interpret those poll numbers, they are not good for CNN and other news outlets.

Regardless of the slogans they use to convey “truth” in their reporting, the media has been marginalized.

The “fake news” moniker, which has become a rallying cry for Trump and his supporters, surprisingly gained popularity across partisan lines, including among Democrats. According to the Monmouth findings, 61 percent of Democrats believe outlets spread misinformation, up from 43 percent from last year. Belief in the spread of “fake news” by major news outlets also rose from 2017 to now among Republicans, up from 79 to 89 percent, and independents, rising from 66 percent to 82 percent.

Americans also are increasingly wary of the motivations behind allegedly misleading coverage, with 42 percent of respondents saying they believe that major outlets disseminate misinformation to push a political agenda.

So now, even Democrats believe the news is fake. And trust me, they aren’t saying Fox News is fake.

But the worst part is the knowledge that news outlets now push political agendas. I think I hear a fat lady singing!

In an online flash poll on fake news for the 2018 Edelman Trust Barometer, Republicans were notably more likely to blame news organizations than Democrats were. 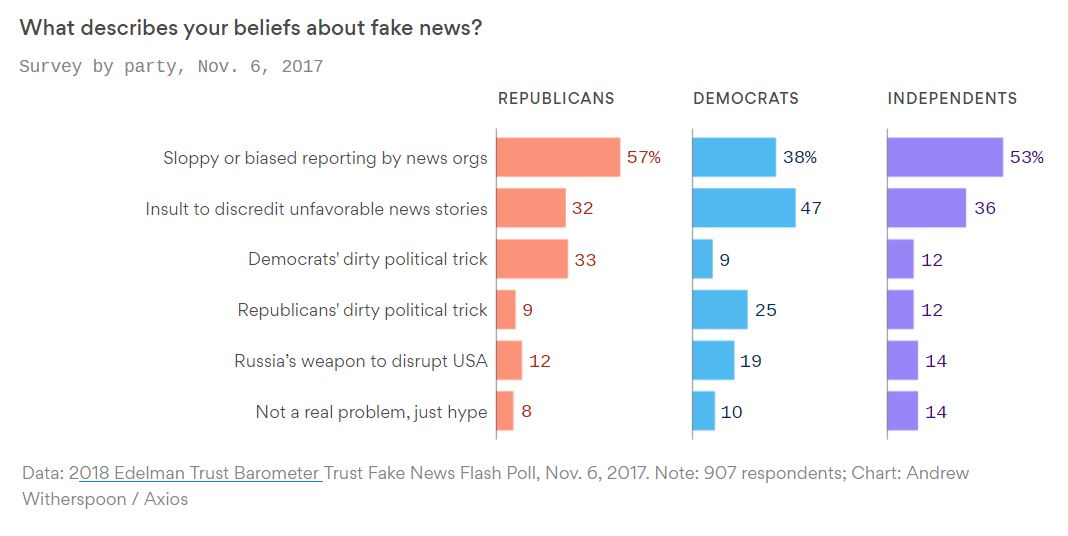 This doesn’t bode well for media or social media. Nor should it.

While Zuckerberg and others pretend to want to get to the truth about fake news, they propagate fake news at the speed of light…literally.

But now the people know the game.