A liberal political action committee dares to slander by comparing Republicans to “communists” and calls the National Rifle Association a “terrorist group”:

Tonight at 6: Pensacola community reacts to a billboard calling NRA “terrorist organization”. We talked to the man responsible for the billboard @weartv #C3N #Pensacola pic.twitter.com/HPO1Nl1daF

“With the GOP majority in the House and in the Senate, the NRA makes impossible any meaningful, common-sense gun reform,” Taylor said in a phone interview Friday. “That includes background checks and assault weapon bans.”

Taylor said he currently has a contract for “28 or 29” billboards throughout the country and has received about $5,000 in donations from roughly 3,000 to 4,000 people in the last eight weeks. The billboard campaign began at the start of 2018.

Mad Dog PAC looks to put up its anti-NRA and anti-Republican billboards in traditionally red states. Taylor said Pensacola isn’t a specific target of his campaign.

“The Matt Gaetz one obviously went up where it did because it’s his congressional district,” Taylor said. “We have dozens of billboards up across the country with anti-NRA messages. We looked at putting this one up in about a 100-mile range from Pensacola to Alabama to Mississippi. Just went with the available space.”

Mad Dog-PAC already has several more anti-NRA billboards going up in other states.

First one up in Pensacola, Florida. Second one going up in Pittsburgh. Third one going up in another part of PA to be determined. Please chip in at https://t.co/TJFoYRw0A2 thanks all. pic.twitter.com/dRpO0RrDso

The PAC has also targeted President Trump with their billboards at Mar-A-Lago.  The Bradenton Herald reports: The goal of the PAC, which formed late last year and has raised $7,000, is a billboard campaign to “make an impact” on the 2018 midterm elections in November, said its treasurer J. Dirk Schwenk. Speaking by phone Wednesday, the Annapolis, Md.-based lawyer confirmed the billboard was theirs.

An exposé by The Washingtonian revealed:

Before our phone conversation, I had spent a day hanging out with Taylor, cruising around Rock Creek Park in his vintage Ford Torino and getting a feel for his odd existence as a low-key suburban dude who’s also at the scalding center of what he sees as an information war. In person, Taylor is friendly and open, with a slouchy, shuffling demeanor that betrays his former life as a ski bum and ranch hand. Having grown up mostly in Maine, he worked on Bill Clinton’s 1992 and 1996 campaigns and did a stint as the White House’s director of volunteers. In the late ’90s, he launched a career as a travel photographer, opening a Dupont Circle gallery to hawk his work. Much of his Trump intel, he says, comes from plugged-in former customers of his shop. The gallery closed last year, and these days Taylor—who lives in the Maryland suburbs—travels the country selling photos at art fairs, where fans often approach to shake his hand and ask for selfies. 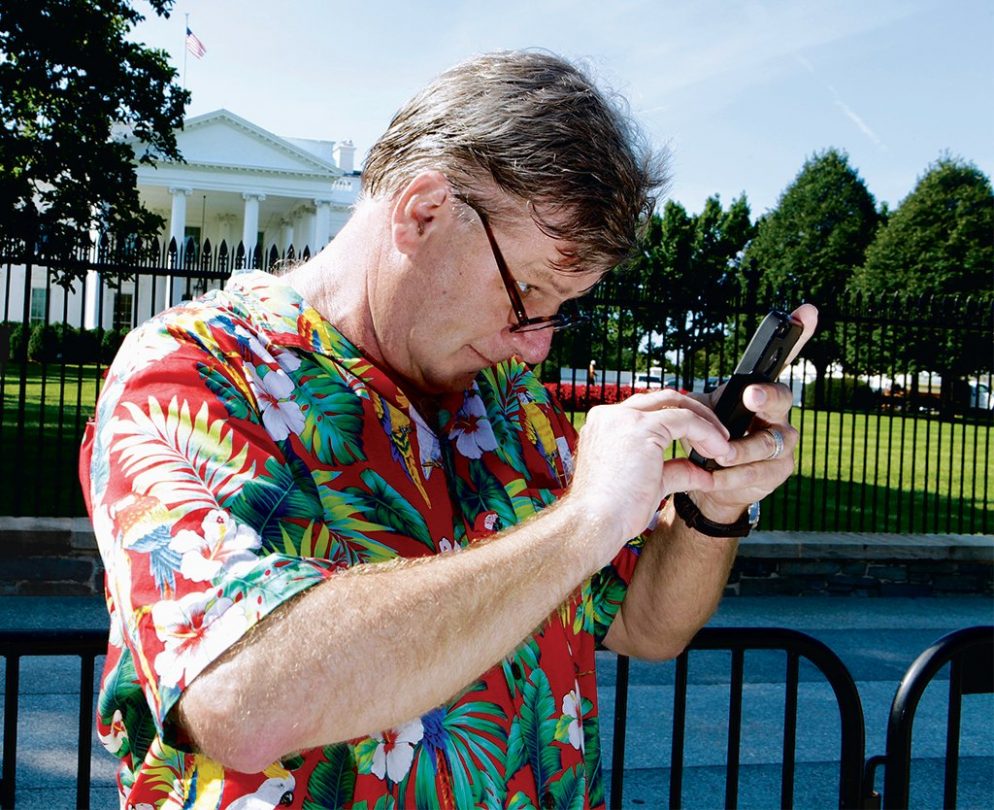 Taylor has frequently been criticized for his methods, which don’t appear to involve the sort of careful, multi-sourced reporting favored by mainstream news outlets. He doesn’t think of himself as a journalist, he says, but rather as a “bomb-thrower,” whatever that means. Many of his followers consider him a folk hero. Skeptics say he’s merely a liberal counterpart to the right-wing truth-twisters who have helped erode trust in the media.

The UK Guardian reminds that Taylor, working with Louise Mensch, was busted for peddling bogus news stories about President Trump.

Many on the far-left social media eagerly ran with:

Explosive allegations about Donald Trump made by online writers with large followings among Trump critics were based on bogus information from a hoaxer who falsely claimed to work in law enforcement.

Claude Taylor tweeted fake details of criminal inquiries into Trump that were invented by a source whose claim to work for the New York attorney general was not checked, according to emails seen by the Guardian. The allegations were endorsed as authentic and retweeted by his co-writer Louise Mensch.

The source’s false tips included an allegation, which has been aggressively circulated by Mensch and Taylor, that Trump’s inactive fashion model agency is under investigation by New York authorities for possible sex trafficking.

Explosive allegations about Donald Trump made by online writers with large followings among Trump critics were based on bogus information from a hoaxer who falsely claimed to work in law enforcement.

Claude Taylor tweeted fake details of criminal inquiries into Trump that were invented by a source whose claim to work for the New York attorney general was not checked, according to emails seen by the Guardian. The allegations were endorsed as authentic and retweeted by his co-writer Louise Mensch.

The source’s false tips included an allegation, which has been aggressively circulated by Mensch and Taylor, that Trump’s inactive fashion model agency is under investigation by New York authorities for possible sex trafficking.

It appears someone REALLY got that wrong!

Ratcheting Up The Bomb Throwing

Our first ‘GOP’ billboard is up in Indiana. Please don’t ask where. It’s in Indiana. Ok? Help fund the next one here https://t.co/TJFoYRw0A2 pic.twitter.com/OV2WEyK68r

This just feeds more into the Democrat lie of collusion with the Russians in the 2016.

As we proved in a previous report, the Mueller Investigations is a massive witch hunt based on false narrative to take down President Trump and members of his inner circle.

Playing devil’s advocate, what would happen if the shoe were on the other foot? What if a Conservative-type organization wanted to put up billboards attacking President Obama on an issue?

CBS News answered that question in 2009:

Lamar Advertising, CBS Outdoor and Clear Channel Outdoor have all agreed not to sell billboard space to World Net Daily, a conservative news site that believes President Obama does not have a U.S. birth certificate. WND has raised $75,000 to put up outdoor ads that say, “Where’s the birth certificate?”

The “ban” isn’t surprising because Obama was, of course, born in Honolulu and is, in fact, American. You can read a thoroughly sourced Snopes article here, which includes an image of the newspaper announcement of his birth, and see a certification of his birth here.

None of this has deterred the crazies, who believe the president has somehow involved every single state health official in Hawaii, and both the newspapers there, in a 50-year coverup of his origins. Joseph Farah, editor and chief executive officer of WND, said:

I never fully realized how dangerous it is that the media in this country are so afraid of government power.

He is clearly not familiar with Lamar’s litigation department, which has devoted untold thousands of dollars in multiple attempts to convince U.S. courts that Lamar is not subject to any type of statute or regulation except the First Amendment, which guarantees its right to do whatever it wants with its billboards, wherever it wants.

If there’s one thing you can’t accuse Lamar of, it’s being afraid of government.

This all confirms a long proven ‘truth’ of Political Science: Liberal Democrats love dishing out the low-blow personal attacks, but they cannot handle it when their own medicine is dished right back at them.

BOLO For FAKE Liberal Billboards In The Following Locations: