When Mars attacks! That’s what I think every time I see Paul Begala.

The former Bill Clinton adviser is an ardent Leftist, and most of his ideas appear to be from out of space.

However, recently Begala said something that made “half-sense”. See for yourself:

“I have no love for James Comey. I’m with the RNC on this. I don’t know if he’s a liar, though. That’s a difference. He’s not a liar. I don’t know that he lied, but the problem is he told the truth very selectively, attacking Hillary Clinton and not ever revealing that Trump himself was under investigation, too,” Begala said. 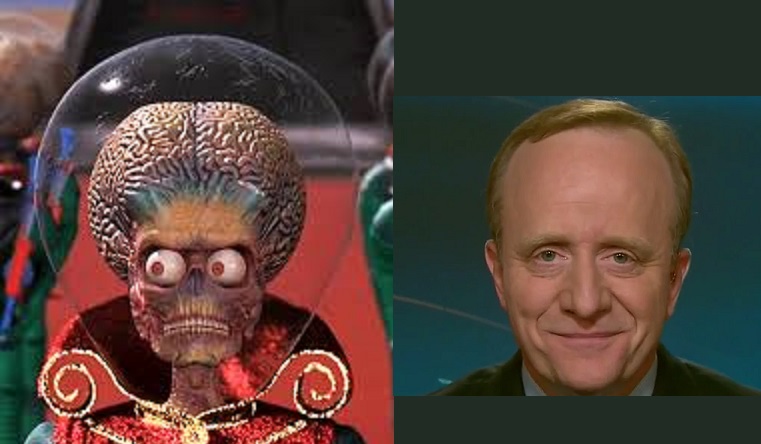 Begala knows that Comey lied. Further, he knows that the Clintons are in big trouble. But that’s as close as you get to a Leftist admission that one of their own is a crook.

Let me help you connect the dots on what’s happening.

You are witnessing the Democrats feeding on themselves. The signs are everywhere, as the Democrats now begin picking sides internally.

Recently Loretta Lynch tossed disgraced former FBI Director James Comey under the bus. Keep in mind that he had already tossed her under the bus, thus the new “He said, she said”.

Clearly Lynch is covering her very exposed ass, at least where it involves James Comey. Frankly, Comey wins in this one, which only goes to prove what America already knows: the Obama administration is the most corrupt in the history of the Republic.

But there are more signs of the fabric unraveling. Here’s what I wrote of one overlooked sign:

I smell something. Barack Obama and Prince Harry are buddies.

And Harry is an anti-Trump slug of the highest order. The idea of inviting Obama, but not President Trump would be a tempting morsel for the young lad.However, Prince Harry and Maiden Markle refused to include the Obamas on the royal wedding list.

The Obamas will not be attending the wedding of U.K.’s Prince Harry and American actress Meghan Markle on May 19 at Windsor Castle, Fox News has learned.

A source told Fox News Former President Barack Obama and former first lady Michelle Obama will not be going to the royal wedding, despite earlier speculation they were set to attend.

“The couples look forward to seeing each other soon,” the source said.

People magazine reported Tuesday the decision may have been made to keep politics out of the royal wedding.

How’s that for an excuse?!

A wedding that is political in its very nature, and the report is the royal couple want to avoid politics?