The left offered many theories to explain to the world how Hillary Clinton lost the election.

One of those theories involved Russian collusion with Trump. And one of the ways the Trump team accomplished their win was supposedly through social media efforts. In other words, Trump’s team also must have colluded with Facebook.

Recall that the Russian spent $100,000 to run various ads on Facebook. This “big spend” sparked conflict and “confusion”, according to the Left.

Further, these ad’s that are listed in Muller’s indictments are also the same ads the House Intelligence Committee released a sampling of Facebook ads linked to Russia late last year.

If you look at the ad’s there are only a few that are pro-Trump. The others are pro-Hillary, with some support for black lives matter, as an example.

The total number of those illegitimate ads are a drop in the ocean — less than 0.004 percent of all content — or about 1 in 23,000 news feed items.

It’s laughable to think that a measly $100,000 could shape America’s opinions about a presidential candidate.

Then we learned that half these ads never ran. And it that’s not enough, the narrative of the ads promoting Trump were negated when we found out that some ads were pro-Hillary as well.

But the “social media” investigations continue. And now we’ve learned that Facebook was the one who did in fact work with the Clinton campaign.

Today a leaked email shows Facebook was likewise supportive and actively helping the Clinton campaign in 2015-2016.

An email from the chairman on the Clinton campaign, John Podesta, thanked Facebook’s Sheryl Sandberg for Facebook’s “help.”

“Wishing you a happy New Year,” Podesta wrote Sandberg, according to an email published by Wikileaks. “2015 was challenging, but we ended in a good place thanks to your help and support. Look forward to working with you to elect the first woman President of the United States.”

Sandberg responded that she was “thrilled” at Clinton’s progress.

“I am thrilled at the progress Hillary is making,” Sandberg wrote back. “Thank you for the kind thoughts. No one was more excited for this year to END than me! Onward to a new year and hopefully health and happiness for you and your family.” 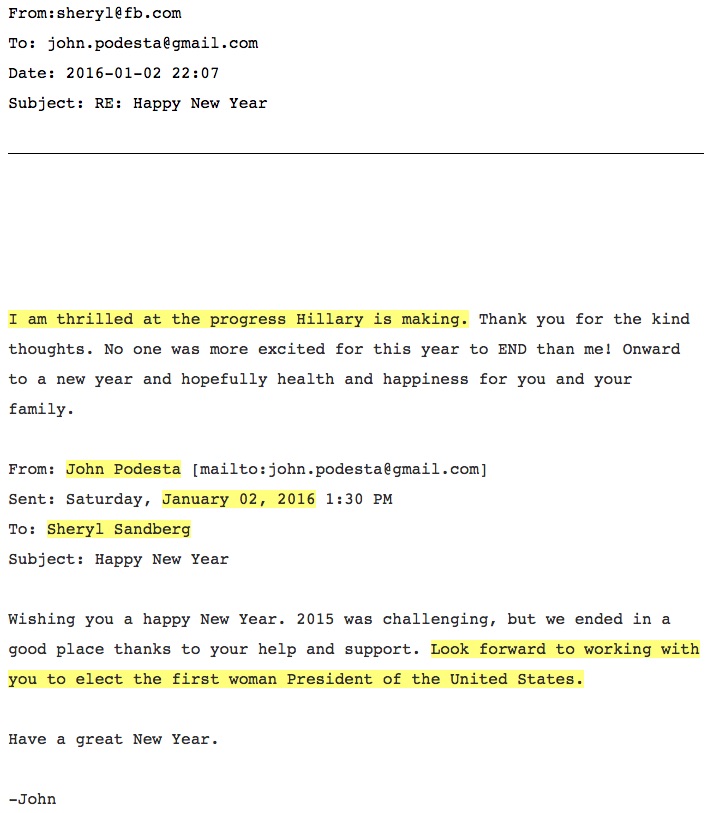 Facebook’s coziness with the Clinton campaign exposed. And not just by WikiLeaks.

“Facebook was surprised we were able to suck out the whole social graph, but they didn’t stop us once they realized that was what we were doing,” Davidsen wrote Sunday night after news of Cambridge Analytica broke.

“They came to office in the days following election recruiting & were very candid that they allowed us to do things they wouldn’t have allowed someone else to do because they were on our side.”

This new knowledge comes days after Facebook made a fuss toward the Trump-aligned Cambridge Analytical.

After news reports surfaced late last week that showed how the firm was able to exploit the social media platform, Facebook banned both Cambridge Analytica and its former staffer Wylie from the platform.

A double-standard to say the least, given how Facebook happily helped Obama in 2012, and now Hillary Clinton in 2016.

But now Zuckerberg must pay the price. Because he allowed Trump’s team a back door. And the Trump team entered. The Democrats demand to know how Facebook will go back to exclusively cheating on behalf of Democrats!

The question many ask is, “How did Hillary Clinton possibly lose?!”.

In addition to Hillary Clinton buying the DNC, paying for the fake Dossier, obtaining illegal FISA warrants, having celebrities and the media on her side, and the entire Obama administration at her beckon call, Clinton had the entirety of Facebook. And she still lost.

Funny how the more and more the left “investigates” to get to the bottom of how Trump won the election, the more crimes they uncover about the crimes they committed.