What Lesko Win in AZ REALLY Means for Democrats 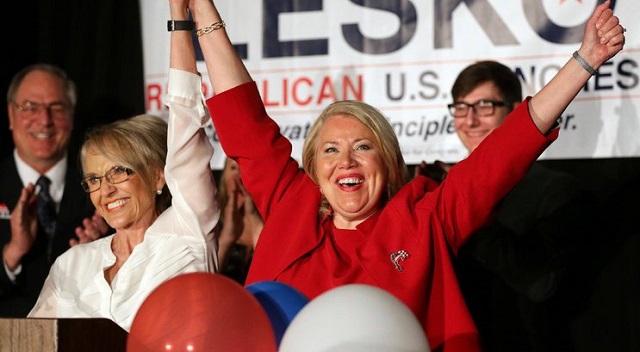 Democrats have a funny way of trying to make losing look like winning.

They poured money into a race they knew they couldn’t win to get the “moral” victory. And when they lost, they claimed that their loss forebodes doom, no ARMAGEDDON for the Republicans?

Look at how AP depicted the loss:

Republican Debbie Lesko is the projected winner of Arizona’s House special election, allowing the party to breathe a sigh of relief as it holds on to a safe red district.

Whew. That was close. But actually it wasn’t.

There was no doubt the Republicans would win. But the Democrats hyped things to the point of exhaustion.

They gave theoretical numbers not based on reality. Previously they hadn’t even run candidates, so the 21 point advantage was nebulous, at best.

But the next part of the article offers more fun insights:

The projected Tuesday victory for Lesko, a state senator, in the state’s 8th District avoids what would have become the GOP’s second special election loss in a recently Republican district in only two months. Democratic former physician Hiral Tipirneni had vied for an upset in a district that has a strong Republican voter registration edge and voted for President Donald Trump by about a 21 percentage point margin in 2016.

Did you catch it?

Had the Republicans lost, it would have been their second in a “recently Republican district” in only two months.

So although the Republicans only held the other district for a short time, it flipped back. That is supposed to be a sign that America wants things to go back to the Era of Obama? On the heels of a fresh loss?!

It flipped back for one reason. Democrats excel at one-offs.

They pour money (money they don’t have) into races to win philosophical battles, in order to make people believe their philosophy is en vogue. Then they cheat like Clintons to make it so.

Then when they know they have lost legitimately, they “fabricate” just enough votes to beat the hapless rube Republican who is all too happy to concede.

Regardless, Democrats have some reason for optimism from the results. Tipirneni appeared to have lost by significantly less than Trump’s margin of victory in the district, continuing a trend in special elections since Trump won the White House.

Sure, they can win in 2018, said the piccolo player with a pager.

The Democrats intentionally ignore the warning signs, just as they did with Hillary Clinton. Nothing has changed.

They remain messageless and leaderless. Unless you count Stormy Daniels.

So let’s call this victory what it is…another Republican win. Moreso, this victory represents the prelude to the kiss.

And if recent events forebode anything, the Democrats will get their Muslim-loving clocks cleaned in November.

The black exodus has begun. And despite Kanye’s recent help, this exodus began in 2016, when Trump hit the scene.

Democrats’ constant demonization of Trump has actually made him a counter-culture hero, particularly to blacks. But don’t leave out the Millennials. They still smart from the cheating of Bernie Sanders, and the revelation of just how crooked the Democrats are.

And not to open old wounds, but the scandal traps the Democrats thought they set for Donald Trump have ALL ensnared the Democrats themselves. Daily the list of lecherous activities against Trump grows, the most recent the revelation of the 50,000 additional FBI emails.

The public keeps score, and it’s Trump 15, Democrats 0. Soon that score will be 27 to nothing, and we’re talking soccer! No overtime, just a humiliating loss for the most crooked, racist political party on the face of the earth.

The Lesko win is a sign of what will come in 2018. Democrats will finally get their Armageddon; just not how they predicted it.