Apparently the tricks of our former leader remain in play. 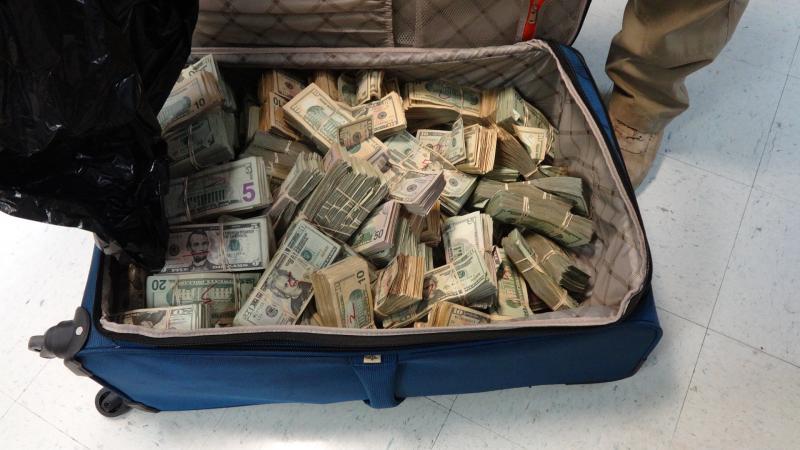 In fact, chalk this up to a copycat crime. A Muslim scam artist tried to send over $100 million U.S. greenbacks (and other currencies) to his “home-jihadis” by way of suitcases. Perhaps he got the idea from the terror-funding Obama shipping Iran the booty on pallets?

Recall Obama shipped $400 million to his Iranian nuclear bomb builders in the dead of night on pallets. Not only did Obama get away with money laundering, but he sunk our country to a new low. It was the first time the United States ever paid ransoms to terrorist organizations.  Interestingly, Obama’s funding project didn’t land him in jail, at least not yet.

This story begins at Minneapolis-St. Paul International Airport, where mysterious suitcases filled with cash have become a common carry-on.

On the morning of March 15, Fox 9 chased a tip about a man who was leaving the country. Sources said he took a carry-on bag through security that was packed with $1 million in cash.  Travelers can do that, as long as they fill out the proper government forms.

Fox 9 learned that these cloak-and-dagger scenarios now happen almost weekly at MSP. The money is usually headed to the Middle East, Dubai and points beyond. Sources said last year alone, more than $100 million in cash left MSP in carry-on luggage.

The national, go-to expert on what is behind these mysterious money transfers is Glen Kerns.

“What we were interested in is where it was going,” Kerns said.

He is a former Seattle police detective who spent 15 years on the FBI’s joint terrorism task force, until his retirement.

Kerns tracked millions of dollars in cash that was leaving on flights from Seattle.

It was coming from Hawalas, businesses used to courier money to countries that have no official banking system.

Some immigrant communities rely on Hawalas to send funds to help impoverished relatives back home.

Kerns discovered some of the money was being funneled to a Hawala in the region of Somalia that is controlled by the al Shabaab terrorist group.

It’s all about welfare fraud through a daycare scam, says the investigator.

Ten daycare companies are under active investigation at this time and according to public records. Most are owned by Somali immigrants.

One Somali immigrant plead guilty to welfare fraud after being sworn in as a member of the city of Hopkins Park Board, Fox reported.

“I will support the constitution of the United States,”  Fozia Ali said.

As she was taking her oath of office, she was also under investigation for wire fraud and theft of public money.

“So help me God,” she said during the ceremony.

I don’t think the Constitution has anything in it about committing fraud?

A little background on the welfare fraud:

The state would pay a daycare’s bill and within hours of the money showing up in the business’s bank account, funds were being wired to the United Arab Emirates.

Those wire transfers stopped after a few centers were busted.

Which brings us back to those mysterious suitcases at Minneapolis-St. Paul International.

A trend all too familiar to former terrorism investigator Glen Kerns.

Fox 9 asked him how likely it is that some of the money is going towards terrorism?

“I say absolutely, our sources tell us that. Good sources, from the community leaders,” he said. “My personal opinion is we need a nationwide task force to clamp down on this type of fraud.”

More on this multi-million dollar welfare scam from Fox 9:

You can bet the number of money-laundering and money-funneling scandals are a long as Hillary Clinton’s list of excuses for losing the presidency. Let’s hope our new and improved FBI and other agencies can manage it.