FBI Channels its Inner Hillary Clinton: From Deplorables to Pieces of Sh*t

All eyes awaited the highly anticipated IG report. And what we got shocked most Americans.

Despite Democrats’ attempt to spin the results, we learned what we already knew and then some.

First, James Comey deserved to be fired. Moreover he deserves to be in prison.

Second, more than Comey deserves to be fired, as the FBI has a culture of corruption against Donald Trump and Conservatives.

Third, we learned of the disdain the FBI has for the people who supported Trump. Sadly, the FBI considers the best citizens of America pieces of sh*t.

Recall back late last year when texts messages were originally leaked from the FBI lovers Peter Strzok and Lisa Page.

Lisa Page had sent a text to Peter Strzok asking,

And Strzok’s response was nowhere to be found. But then we get the IG report, so now we know that the FBI withheld this information from Congress, ergo from the American public.

In his response, Strzok assured his mistress Lisa Page that he and others with in the bureau would stop Donald Trump from becoming President.

Perhaps the most damaging new revelation in the report, according to multiple people familiar with it, is a previously unreported text message in which Peter Strzok, a key investigator on both the Clinton email case and the investigation of Russia and the Trump campaign, assured an FBI lawyer in August 2016 that “we’ll stop” Trump from making it to the White House.

“[Trump’s] not ever going to become president, right? Right?!” the lawyer, Lisa Page, wrote to Strzok.

This message was sent to Page a few days earlier, shortly before the talks of an “insurance policy”. That was code for “Trump would never become president”.

“I want to believe the path you threw out for consideration in Andy’s office…that there’s no way [Trump] gets elected…but I’m afraid we can’t take that risk,” Strzok text messaged to Page in an Aug. 15, 2016 exchange, referring to Andrew McCabe.

Clearly these two employees were discussing a plot to get rid of Trump if he ever did indeed become president. And these are just the messages we know about.

Moreover, there were many other profanity-laced text messages between Strzok and Page showing their contempt for Donald Trump.

So they hate Trump. But they also hate everybody who voted for Trump.

As the IG report showed, these FBI employees had a serious bias. Included in their rant they refer to the majority of Americans who elected Trump as pieces of sh*t, lazy, and poor: 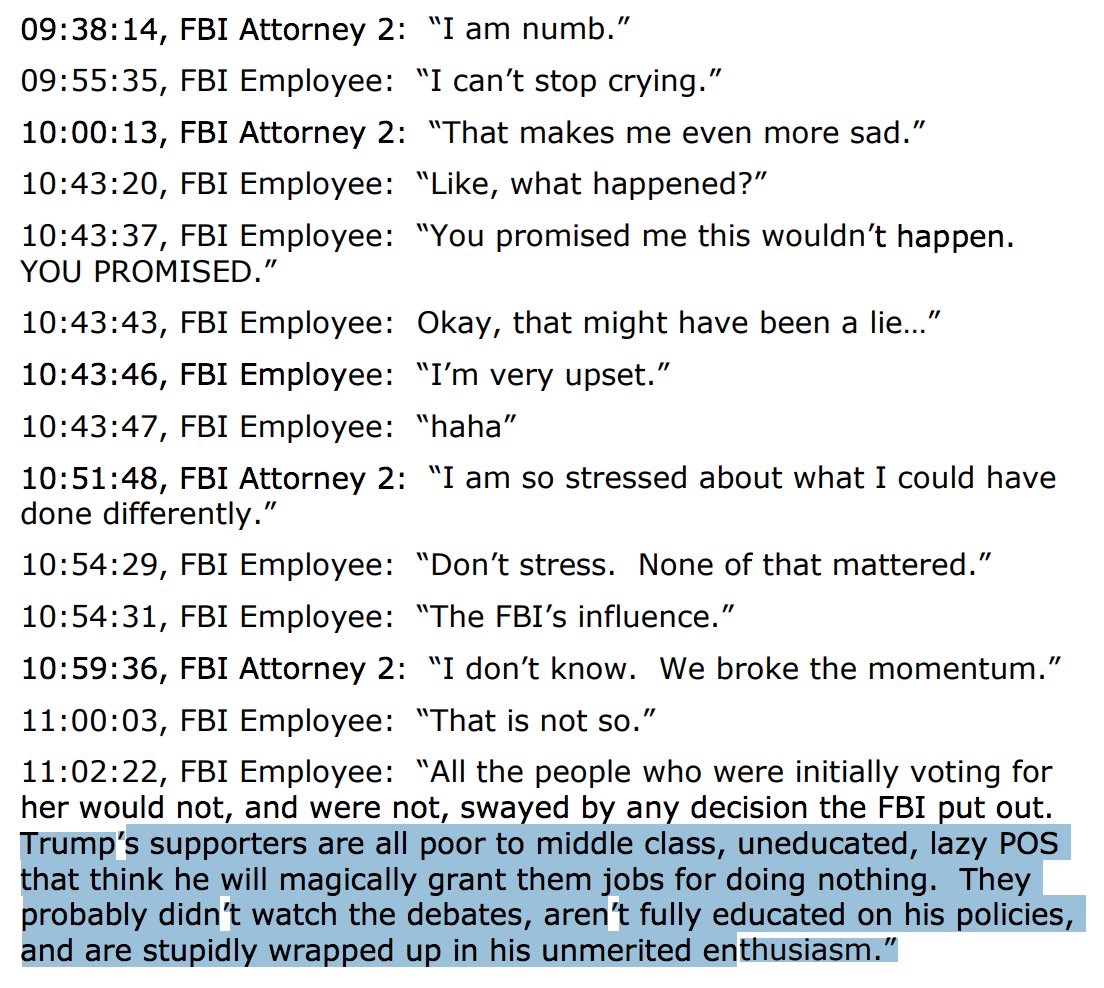 The organization that prides itself on being above reproach is anything but.

This is how the “unbiased” FBI feels about hard working, taxpaying American citizens who keep this great country running.

Comey’s FBI wants us to believe we can trust them. They claim they will protect us, as they plotted to take down the very person we elected. Then, they created the lie of Russian collusion to cover their tracks.

To add insult to injury, Peter Strzok still has a job at the FBI and receives his full salary. And while Strzok undermined Trump, he did much of this under the watchful eye of Comey, and with the permission of Barack Obama.

And let’s not forget that Strzok was Comey’s right hand man when writing up and exoneration letter for Hillary Clinton before she was even interviewed by the FBI.

In addition, it has been revealed this week that Strzok was also the FBI agent responsible for softening language that Comey used in his July 5, 2016 statement closing the Clinton investigation from “grossly negligent” — a term which has legal weight — with the softer phrase, “extremely careless.”

Despite this entire EXTREME biased the swamp creatures that released this report had the nerve to end their report by saying they did not find Comey guilty of political bias.

Former FBI Director James Comey “deviated” from FBI and Justice Department procedures in handling the probe into Hillary Clinton, damaging the law enforcement agencies’ image of impartiality even though he wasn’t motivated by political bias, the department’s watchdog found in a highly anticipated report.

“While we did not find that these decisions were the result of political bias on Comey’s part, we nevertheless concluded that by departing so clearly and dramatically from FBI and department norms, the decisions negatively impacted the perception of the FBI and the department as fair administrators of justice,” Inspector General Michael Horowitz said in the report’s conclusions, which were obtained Thursday by Bloomberg News.

Anyone with a connected brain stem can see that is a complete lie.

This watered-down report is just the trip of the iceberg. Rest assured that more damning information will soon see the light of day.

Also, while Leftists in DC and other elitists may believe they have gotten away with something, you can bet the rank and file Democrats continue to be disgusted by their party.