That’s what we called it when a man’s woman has total control over him. And whatever Scarborough’s politics were back in the day, they are no longer his own.

Mika Brzwhatever pulled a Trump on Scarborough and has grabbed her man by his mangina with the vice-grip of an eagle hauling away prey. Thus Joe Scarborough exists no more.

The MSNBC who believes himself to be a Conservative Republican on the fake news station called Donald Trump racist…again. 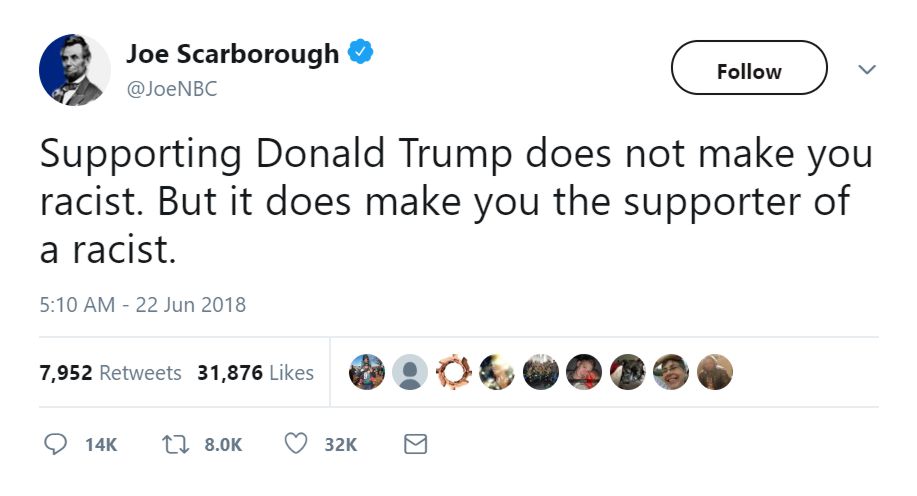 MSNBC’s Joe Scarborough didn’t mince words Friday morning: He called Donald Trump “openly racist” and said that, by extension, so are his supporters.

In a segment on “Morning Joe,” Scarborough and co-host Mika Brzezinski ripped into the president for his actions.

“You’ve got Charlottesville, where Donald Trump of course defended white supremacists with moral equivalency,” Scarborough said. “Even this year, Donald Trump calling Hispanics ‘breeders.’ Just last week, saying that immigrants coming across the border were, quote, ‘infesting America,’ and no, he wasn’t talking about gang members.”

But Scarborough channeled his inner Hillary Clinton and went further with the “deplorables”, as the article explains.

Scarborough then told Trump supporters they are just as bad as the president regarding racial issues.

“[Trump supporters] cannot say, ’Oh, I’m just supporting him because he’s giving them hell in Washington, D.C.,” Scarborough said. “No, he’s been openly racist, just like we said back in December of 2015, openly racist. If you support him, then you’re supporting that, and you are that. It’s that simple. That’s what we’ve come to now.”

I don’t even bother to respond to this nonsense, as that’s what Leftists have come to expect. The best thing for us to do is to call Leftists what they are.

As for Brzezinski, she chimed in, suggesting that Trump should be concerned about his image.

Brzezinski also said the recent immigrant family separations at the border and the administration’s zero tolerance policy are bad for Trump’s image.

Leftists have learned little, as they continue their attempts to remove Trump from office. I’m curious how they see things playing out over the next few years.

Before they look back it will be 2024 and Trump will have served his term. He will enjoy the most successful presidency ever.