Wow, how great does it feel to have a REAL MAN representing America!

While Bill Clinton begged for a trade summit and was snubbed, and metrosexual Obama bent over and took up to the butt at every trade negotiation, Donald Trump displayed the Alpha male to the world.

The world media in unison used the word “unprecedented” to mark the occasion. It was indeed unprecedented that an American president actually put America first at one of these events. Trump made it clear that we would be friends with all the world leaders, but the gravy train is over.

Trump was masterful. And if a picture says 1,000 words, what does this one say? 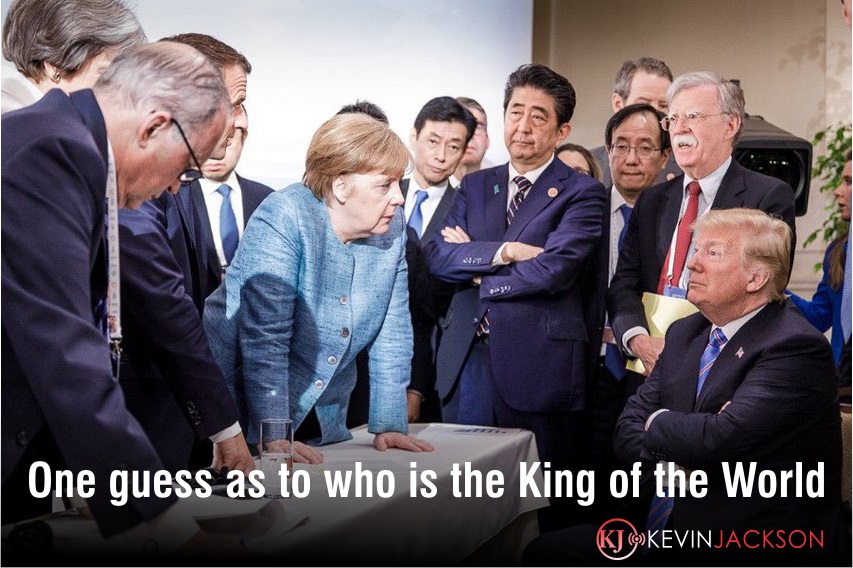 If feminists were truthful, they would admit that Trump sitting in the midst of all these world “followers” got feminists HOT!

Look at Trump in that picture. Arms folded, body-language saying, “I accept NOTHING you are saying.”

And what of that wry smile? Trump told the world that they days of fleecing American citizens is over. Further, there is nothing you can do about it.

In case you want to know who supports Trump. Look at the PM from Japan. He has the same body-language, ergo “I’m with HIM!” And Japan has the 3rd largest GDP (almost 6 percent) on the planet, and is #2 per capita.

Trudeau and European leaders threatened to institute retaliatory measures and Trump lashing out in response by refusing to endorse the the G7 communique, a negotiated statement on shared priorities among the group.

I’m sure the president had no trouble signing that document, as it changes nothing about how America’s trading partners have NOT lived up to the idea of fair trade.

“Fair Trade is now to be called Fool Trade if it is not Reciprocal. According to a Canada release, they make almost 100 Billion Dollars in Trade with US (guess they were bragging and got caught!). Minimum is 17B. Tax Dairy from us at 270%,” he wrote in the first of five tweets relating to the weekend’s summit.

So if the EU wants to fight, then let the fight begin. Here are the facts: 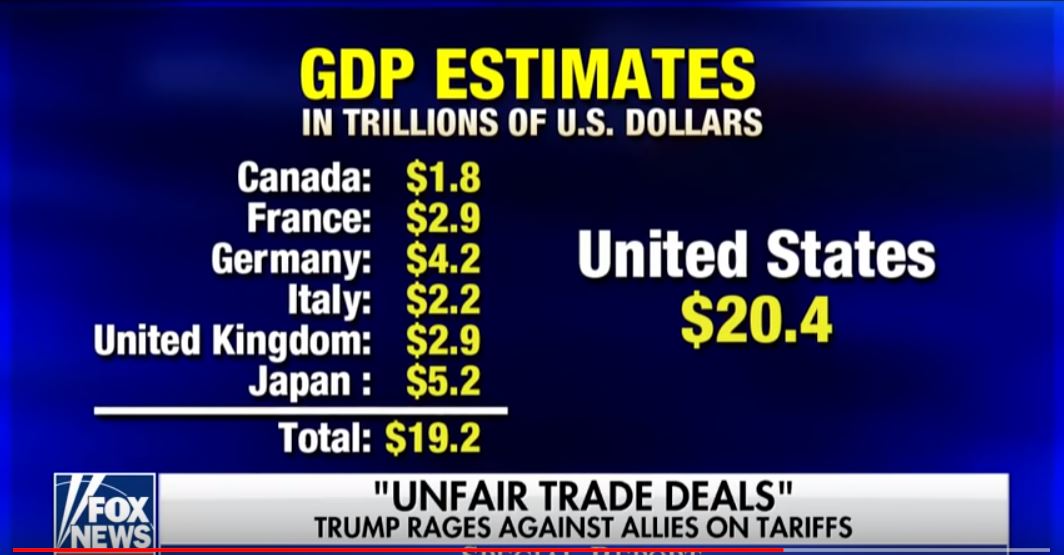 That’s right, thanks to President Trump, the U.S. economy is bigger than all the other economies at the G7 combined. And keep in mind, Japan sides with America. So does S. Korea, the 12th largest economy in the world, and about 2 percent of the world’s GDP.

Let’s do the math, shall we?

So at least 47 percent of the world’s economies back the U.S. And I suspect that Germany, who has a $68 billion surplus in trade compared with America will be a lot easier to negotiate with than Merkel’s posture in the picture suggests.

And what of Mexico, with a $68 billion deficit, and as President Trump noted, “…not including the illegal drugs” that prop up their economy to a large degree. The reason Mexico doesn’t want that wall is their politicians rely on the dirty money from drug and human trafficking that lines their pockets and doesn’t hit the books.

So bring on the trade war! Because what President Trump exposed is that the U.S. has been in a trade war for decades. No matter what the EU puts together, the U.S. will put things back in balance.

Trump leads the world. The picture not only suggests it, it proves it. And Trump’s attendance at the G7 was not just a favor to Trudeau, but even more symbolic. The President attended in order to show the world that he fears none of them. It was the USA vs the world, and America easily won.

I suggest the world get used to it. Trump is Iron Man.