It’s the little things that matter when you’re solving problems. And President Trump understands that.

While building a wall may symbolize America’s rightful and new stance on illegal immigration, other measures matter as well. 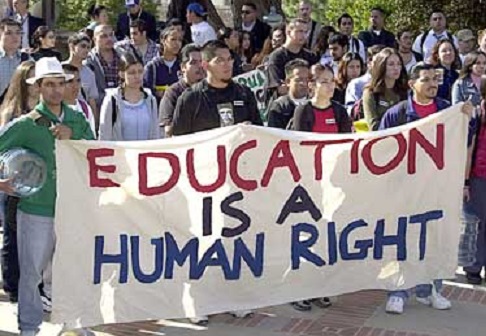 This latest measure by the Trump administration proves that the president understands all aspects of the illegal immigration problem.

One major part of the “game” of illegal immigration comes from those posing as students and visitors. However, according to UPI: President Trump just ended that game:

President Donald Trump‘s administration posted a new policy memorandum to crack down on students and exchange visitors overstaying their visas.

The U.S. Citizenship and Immigration Services memorandum says students and exchange visitors will rack up “unlawful presence” days in the United States starting on the date they failed to maintain their F, J, or M immigrant status, according to a release. Individuals who depart the U.S. after more than 180 days of unlawful presence may be barred from re-entering the U.S. for three years.

The memorandum’s new time frame will supersede the Immigration and Naturalization Service’s policy, which went into effect in 1997. Under that old policy, students and exchange visitors “started accruing unlawful presence” on the day authorities discovered the violation, the memorandum shows.

While we complain a lot about illegals from Mexico, understand that the visa problem is equally pervasive.

A Wall Street Journal report said some experts believe as many as half of the undocumented immigrants in the U.S. overstayed visas that expired.

What a racket Leftists allowed to occur. This happened because we all believe in “education”, and want people to have access to American universities. However, this program isn’t about education at all, but instead about indoctrination, and ultimately votes.

One can only guess at the millions of visa violators now living in America.

As for the Trump administration’s position on this aspect of illegal immigration, USCIS Director L. Francis Cissna commented,

“USCIS is dedicated to our mission of ensuring the integrity of the immigration system. F, J, and M non-immigrants are admitted to the United States for a specific purpose, and when that purpose has ended, we expect them to depart, or to obtain another, lawful immigration status… The message is clear: These non-immigrants cannot overstay their periods of admission or violate the terms of admission and stay illegally in the U.S. anymore.”

The new rules will go into effect on Aug. 9, and it’s about time.

And when the new rules for employers goes into enforcing laws against hiring illegals, the message will become crystal clear: America wants legal citizens, and we set the terms.