Finally a Legit Poll: Obama the Worst President since WWII

The truth emerges about Obama as the worst president since WWII. And that’s only because they aren’t measuring presidents before WWII.

If they went back further, #44 would likely be #44. Even Leftists know this.

So we learn from the latest Quinnipiac University Poll that Obama topped predecessor George W. Bush as the worst president in modern history. 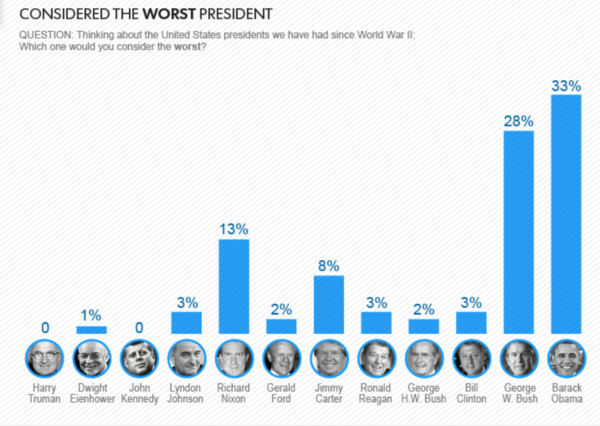 In a new Quinnipiac University Poll, 33 percent of respondents named Obama the worst president since World War II. In a relatively distant second, Bush came in at 28 percent in the comparison of post-war presidents.

“Over the span of 69 years of American history and 12 presidencies, President Barack Obama finds himself with President George W. Bush at the bottom of the popularity barrel,” said Tim Malloy, assistant director of the Quinnipiac University Poll.

According to USA Today, time plots against Obama and Bush, as they just need more time.

Of course, Obama and Bush are the most recent presidents; historians will tell you that it takes decades to truly measure an individual president’s performance.

Frankly, I think this is nonsense.

Time will only hurt both these presidents. Bush raised both the debt and deficit to untenable levels, and Obama put the Bush Era on steroids.

For now, Ronald Reagan topped the poll as the best president since World War II, with 35 percent. That’s because Trump can’t be measured yet. But you can bet that when Trump is done, America will have a solid #1. For now, I am content with Reagan. In fact, I’m fine with the second place president, Bill Clinton (18%). Fortunately for Clinton, he had a Gingrich-controlled House who made a contract with America.

There is no doubt that Clinton gave us a balanced budget, welfare to work, and he put more cops on the street, to name a few.

This poll measured in two directions.

So people could select the worst and the best. In the category of best, Obama received only 8 percent. What a fall from grace for the man the Democrats put a lot of faith in.

It appears that more people have begun to look more intensely at Obama. The man who lost over 1,000 Democrat seats during his tenure. I suspect even Democrats now understand the damage of Obama.

Understand that Obama has been in a steady decline in polling since he became president. He maintained high numbers due to the pressure from the Left to continue the ruse of Obama’s competence. But they couldn’t keep it up, as Obama failed on so many levels.

Outside of Trump’s exposure of the Deep State, perhaps his worst act for Democrats was the exposure of Obama’s total incompetence.

Whether domestic or foreign affairs, Trump has showcased true leadership.

His policy positions expose the Left’s hatred of America and abject incompetence. So for example, Leftists actually fight President Trump on balancing trade. How could you possibly not want America to balance a trade deficit of almost $800 billion? No sane person would.

The same has proven true of negotiations with North Korea, tax policy, immigration, and so on. When it’s all said and done, Trump will have completely exposed Obama. And his poll numbers will reflect this.