Maxine Waters exposed what we already know about the Democrats. The party is in deep doo doo.

Waters has been taunting Democratic leadership since President Trump’s election. The “blue wave” that fizzled is believed to have happened because of Waters’ calls for impeachment of President Trump. While Waters’ insanity has certainly hurt the Democrats, they have bigger problems than James Brown’s ugly sister.

But Waters didn’t help her case when she recently called for Democrats to harass Republicans who work for Trump, and about any other Republican as well.

Democrats know what their base is capable of, and in a word it’s “Scalise”.

Because of Waters’ rancor, Democratic leaders Chuck Schumer and Nancy Pelosi both criticized Waters’s call for people to confront Trump supporters in the streets.

“I strongly disagree with those who advocate harassing folks if they don’t agree with you,” Schumer said last week.

“That’s not right and that’s not American,” he added.

Democrats will likely try to play this off as a small rift. However, this blow-up is anything but.

This public spat showcases a chasm between factions of Democrats that’s been brewing for some time, Kanye’s recent revelations notwithstanding.

In what is long overdue, the Democrats just saw the black vote begin to evaporate like water on a summer day in Death Valley.

On Joy Reid’s MSNBC show, Waters ignorantly defended her comments, restating her assertion that Trump “does not deserve” to be president of the United States. She commented that she was “simply standing up to him.”

Waters then accused the top Democrats of missing the point and simply looking out for their own jobs. And on this point, she is right.

“You know, I was surprised at Chuck Schumer. I’ve not quite seen that done before, but one of the things I recognize, being an elected official, is in the final analysis, you know, leadership like Chuck Schumer’s will do anything that they think is necessary to protect their leadership.”

But what Waters didn’t say is she is a guilty dog barking.

No Democrats have performed well for blacks. So the bloodletting begins, courtesy of Donald Trump. 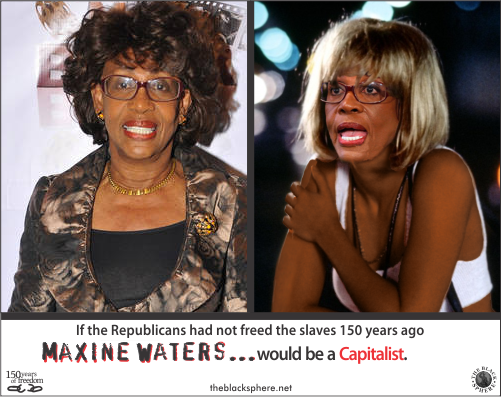 Trump’s supporting cast have been black leaders like Thomas Sowell, Walter Williams, Justice Clarence Thomas, Clarence Mason Weaver, Larry Elder, Star Parker, and Raynard Jackson for starters. Each of them have logged decades in the fight to win back black Americans from the grip of the evil Leftists.

Over the last decades names like Christopher Harris, Stacey Washington, even Dr. Ben Carson emerged to take leading roles in shifting the vote.

If CJ Pearson and Candace Owens are missing, it’s because they weren’t even born when the black exodus from Democrats began. No hard feelings, but facts are facts.

This pressure has been building for decades. And nobody can take full credit for what’s happening with the Democrats. What’s occurring took the efforts of many people over a period of time. And the catalyst for change is Donald Trump.

Without Trump, we aren’t having much of this discussion. A Hillary Clinton presidency would have set blacks back for decades.