I thoroughly enjoy my political life right now. It’s as close to Heaven as a Conservative can get, politically speaking.

The election of Donald Trump has righted the political ship. Trump dazzles on so many levels, the first being his dismantling of Obama’s so-called legacy. At every turn, Leftists decry Trump publicly, yet love him privately.

However, there are times when they must genuinely worry about him. In the same way we Conservatives had our version of hell during the Era of Obama.

Remember when Obama picked two SCOTUS judges?! Even before he picked these judges, we all were forced to consider the possibility. How many SCOTUS judges did you think Obama might appoint? Two? Three? FOUR?!

I know the SCOTUS was my biggest concern during the Era of Obama. There is much we could undo from his destructive presidency, but judges were not part of that list, specifically SCOTUS judges.

Sure enough, Obama made two appointments, and he didn’t disappoint. We got two Leftist fruitcakes, who support the insanity of the Left as they abandon all jurisprudence in their rulings. Who would be next?

Most of the judges are up there in age with Alito being the youngest. As Obama’s administration painfully moved along, the executioner’s clock ticked. Then Judge Antonin Scalia died.

When Scalia died, America dodged a bullet. The timing was obviously God’s province, because dad Scalia died a tick sooner, Obama would have appointed another crazed Leftist.

But we dodged additional bullets, if you think deeper.

Consider that both Ginsburg and Breyer could have retired, opening their seats up to younger, even more dangerous Leftist judges. Instead, those two opted to roll the dice, stay in office. Perhaps they believed the fix was in for Hillary Clinton?

Regardless, Hillary lost, Trump won, and the court will be remade. If I were a better man, I’d say the odds of President Trump replacing both these judges is greater than 60 percent. Replacing at least one of them, I’d go as high as 82 percent, unscientifically speaking.

It took Obama 8 years to get two SCOTUS judges, a number that could have easily been 5 or more. But he only got two. So  President Trump will have accomplished what Obama did in less than two years. A fitting comparison to the effectiveness of Trump versus Obama, by the way.

With this latest appointment, the Left have lost it. All the strategy Chuck Schumer and team put in place to shoehorn Obama’s picks for judges have backfired on the Left. Now they must live with their decisions. I’m sure when Schumer and team implemented the new rules, they have no idea they would eventually lose the White House, the Senate, AND the House.

The Republicans certainly didn’t plan on the ascendance of a man like Trump. This why Schumer hysterically invokes the Biden rule, longing for the days when Republicans willing played political footsies with the Democrats.

In 1992, then-Sen. Joe Biden (D-Del.) gave a speech calling for Congress to delay any prospective Supreme Court pick until after then-President George Bush’s ultimately unsuccessful reelection bid. Interestingly, there was no vacancy on the bench at the time, but Biden drew references to the “rancor” over Justice Clarence Thomas’ nomination.

Yes, yet another stupid rule the Democrats thought would thwart Republicans should the future not look bright for the Democrats. As with all Democrat ploys, any future Republican SCOTUS picks would simply be a “negotiation”, and the American people would ultimately suffer.

The Era of Trump notwithstanding, politicians on both sides of the aisle didn’t anticipate Trump’s stellar performance. Both parties thought politics would remain status quo. So when Trump pulled a fast one when during the campaign and published his list of potential SCOTUS picks, nobody cared. But the list became extremely relevant on November 8, 2016, and moreso on January 20, 2017.

This list satisfied even the most ardent Conservatives, who happily approved the list. And when Trump became president, he went right to the list. He selected Neil Gorsuch, and the rest is history. Gorsuch has agreed with the court’s most Conservative justice, Clarence Thomas 100 percent of the time. 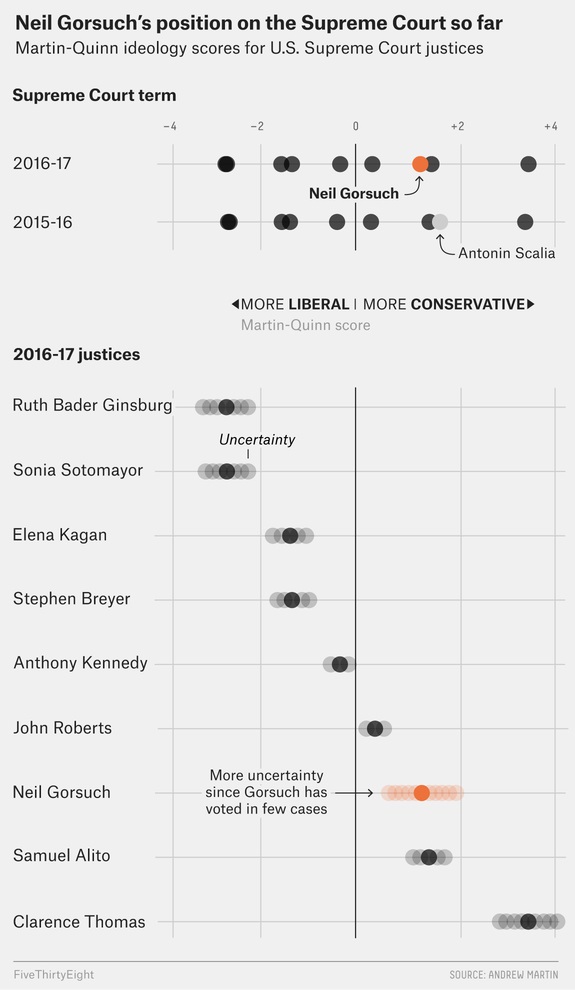 SCOTUS royalty as far as I’m concerned. And now President Trump gets to rinse and repeat. But he can now replace a moderate with a staunch Conservative.

Trump will likely again draw from his approved list. And despite the rumblings of the RINOs, Trump will again appoint a staunch Conservative, i.e. a pragmatist to the SCOTUS.

I chuckle at future.

Democrats scream about Roe v Wade in Trump’s replacement of Justice Kennedy. Because they know that Kennedy has a tendency from time to time to vote “moron”. Trump’s next pick will likely confirm the court as a true 5-4 Conservatives to Morons. While the prospect of 5 true Conservative judges should cause fear, the future is what Democrats really fear.

As I mentioned earlier, Trump will likely replace additional SCOTUS judges. The balance of power is one thing at 5-4, as we learned with Obamacare. There are no guarantees. With Obamacare, somebody on the Left got to Justice Roberts, and Americans were unconstitutionally burdened with Obama’s bastard baby.

But if the court shifts to 6 to 3, things get a lot easier for whatever side; in this case for Conservatives. If the court shifts 7-2, the Democrats will have a meltdown. 8-1 and Trump could wipe out 1/3rd of Leftists by way of suicide.

The irony of the Democrats going DefCon One against Trump, yes nuclear, in their attacks, a veritable coup, and yet here he stands on the precipice of greatness. The reality that Trump has changed politics dramatically for the better, post-Obama, and that he will continue to change the politics of America in the most dramatic of ways waxes poetic under the circumstances.

Could Trump pull and FDR and almost completely rework the court? Doubtful. As FDR practically replaced them all. However, Trump certainly has the possibility of doing what Eisenhower did and replacing as many as 5 SCOTUS judges.

As Maxine Waters said, “God is on our side!”.