On December 27, if you had asked all the pundits around the world what the future of Iran would be, the pervasive answer would be status quo.

Most pundits and other politicos would have agreed that the Iranian regime led by the Mullahs and controlled by the Iranian Republican Guard (IRGC) would remain in control. 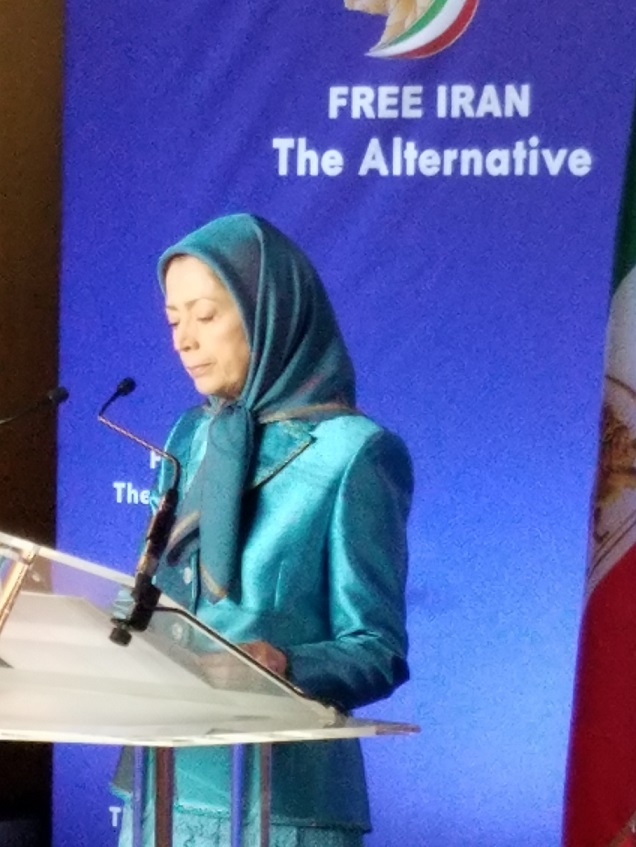 All signals leading up to this, outside of the election of Donald Trump as POTUS, pointed to this attitude. However, in one day things changed in Iran forever.

On December 28, 2017 there were protests in Mashad. Day One the protest began over the price of eggs, which were priced at around $300 for a carton of 20. However, in subsequent days, the protests became political, with 3-4 protests breaking out during the day.

The crowds shouted “Forget Syria!” And along that same theme, they chanted, “Think about us!”

On a stronger political note, the crowds shouted, “Down with Hezbollah!”

But on the fourth day, they crowds had a new slogan:

“Hard liners, reformers, this game is over!”

Mashad is the second largest city in Iran, located far northeast of Tehran. To have a protest break out far from the country’s political center speaks volumes. But the protests weren’t over.

The next protest occurred on December 29, 2017 in Kermashad. This city is located in the Northwest area of Iran, almost at the farthest part of the country from Mashad. In Kermashad more than 12 protests broke out.

In all, during the period there were over 142 protests in cities across Iran. And even more shocking, protests happened in all Iranian provinces. In the protests, over 8,000 Iranians were arrested, with estimates that about 50 were killed by the regime.

Then in Feb 2018 in the southwest region of Iran, Arabs protested about the regime. Although the protests were stamped out by the regime, that didn’t stop additional protests.

In fact, only a month later in March 2018 farmers in Ispahan protested over water.

Essentially water that flowed to farmers for generations were dammed by elitists put in power by the Mullahs. The water was diverted by the IRGC, and Iran’s largest salt lake dried to 5 percent of its previous level. 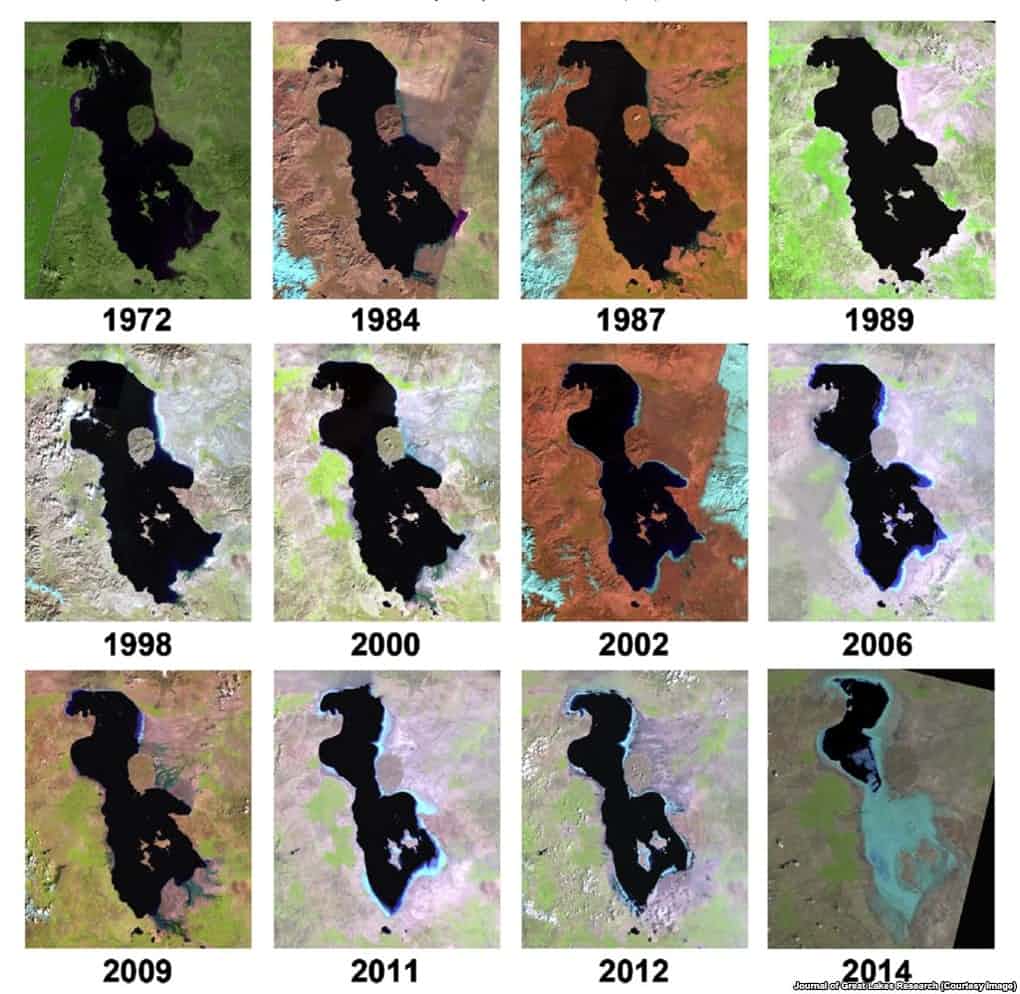 As The Guardian reported on Lake Urmia,

In the late 1990s, Lake Urmia, in north-western Iran, was twice as large as Luxembourg and the largest salt-water lake in the Middle East. Since then it has shrunk substantially, and was sliced in half in 2008, with consequences uncertain to this day, by a 15-km causeway designed to shorten the travel time between the cities of Urmia and Tabriz.

Historically, the lake attracted migratory birds including flamingos, pelicans, ducks and egrets. Its drying up, or desiccation, is undermining the local food web, especially by destroying one of the world’s largest natural habitats of the brine shrimp Artemia, a hardy species that can tolerate salinity levels of 340 grams per litre, more than eight times saltier than ocean water.

The results of this investigation, which recently appeared in the Journal of Great Lakes Research, revealed that in September 2014 the lake’s surface area was about 12% of its average size in the 1970s, a far bigger fall than previously realised. The research undermines any notion of a crisis caused primarily by climate changes. It shows that the pattern of droughts in the region has not changed significantly, and that Lake Urmia survived more severe droughts in the past.

So this lake’s decline is not due to the farce of global climate change.

Instead, this man-made disaster is a political issue where powerful Mullahs impacted the ecology as well as the economy, based on greed and their sick ideology.

Farmers weren’t able to make a living, nor were they able to feed their families. This prompted the protests.

On the first day of the protest, the farmers were beaten by security forces from the regime. However, something amazing happened that Friday.

At Friday prayers, despite the earlier beatings by the regime, the farmers wore shirts that were against the Iranian regime. Even more surprisingly, the shirts had pro-America slogans.

Later this year in April 2018, truckers struck in Kazerun, a small city in the western part of Iran. In those protests, Iranian citizens took over the city for two weeks, chasing the IRGC out.

Finally and most recently, in June 2018 there were protests in the markets in Tehran. These protests occurred by capitalists revolting against the high prices of products. And like the other protests, this one quickly turned political.

None of this is by chance. The NCRI and MEK played a major part in these protests. As they fight for a free and democratic Iran, the group of Iranian expatriates has operatives in every major city in Iran, where they highlight the politics behind all the protests.

And the impact of the NCRI and MEK can’t be underestimated.

The Economy of Iran

A restaurant recently advertised to hire dishwashers. With unemployment over 35 percent with under 30-year olds in Iran, it’s no surprise that over 150 people applied. But what’s most surprising who applied.

Shockingly, 30 of the applicants held PhDs. However, even more telling about the Iranian economy has to do with its currency.

To recap, over 4 months, the Iranian rial has lost over 65 percent of its value, with most of the devaluation coming over the past couple of weeks. So why the acceleration?

I am waiting on the confirming document, but Mercedes issued a directive to its dealers that they cannot repair Iranian-owned Mercedes. This directive didn’t come from the German government, but from Mercedes itself.

In other words, German capitalists aren’t following German Chancellor Angela Merkel on Germany’s policies with Iran. Instead, they follow the policies imposed by Donald Trump, thus taking matters into their own hands.

And what of the Saudis?

Recall President Trump’s first visit abroad. As reported by DW at the time:

Last week, US President Donald Trump signed a multi-billion weapons deal with Saudi Arabia during his visit to the kingdom, where he called for regional allies to further isolate Iran.

Saudi officials have often described Iran as the premier state sponsor of terrorism in the region, saying it aims to destabilize the Middle East and export its revolution to other countries.

More recently, the Saudi government sent a shot across the bow of Merkel as the Saudi Prince made it clear that they back President Trump’s play on Iran. As Handelsblatt reported,

Saudi Arabia has some impressive infrastructure projects under way, including plans to spend over $500 billion on Neom, a brand new futuristic desert city nearly as large as Belgium. On paper, the plan touted to reduce the kingdom’s dependency on oil presents German companies with plenty of opportunities to do business there. But instead, German firms, from Siemens to Daimler to Bayer, have been run up against closed doors in Saudi Arabia in recent months.

Saudi support notwithstanding, it will be the decisions of the United States that impacts Iran the most.

Oh, and then there are those who partner with America, as the Saudi warning to German companies suggests. Expect many more countries to follow:

Barack Obama fell for the appeasement, and thus emboldened the Iranian regime. Next, he funded them. And finally, he allowed Iran to become part of the legitimate banking system, thus they could move money around the world easily.

On November 8, 2016 everything changed in the world.

While President Trump hasn’t directly impacted Iran the way he has other issues in American and around the world, like trade for example, his passive-aggressive handling of Iran shows just how effective he has been in dealing with the rogue nation without any direct involvement. And now the regime suffers mightily.

The Islamic Republic ignored Iranians’ aspirations ever since its takeover. And now, during times of serious social and economic crisis, they plead for unity?

Below is a tweet about Rouhani’s comments on this issue:

As with the Democrats in America, things won’t get better for Iran, unless they change their evil ways. Because the pressure will continue.

The NCRI held an event in Paris where tens of thousands of Iranian expatriates gathered in support of a Free Iran. I was proud to be part of the event. 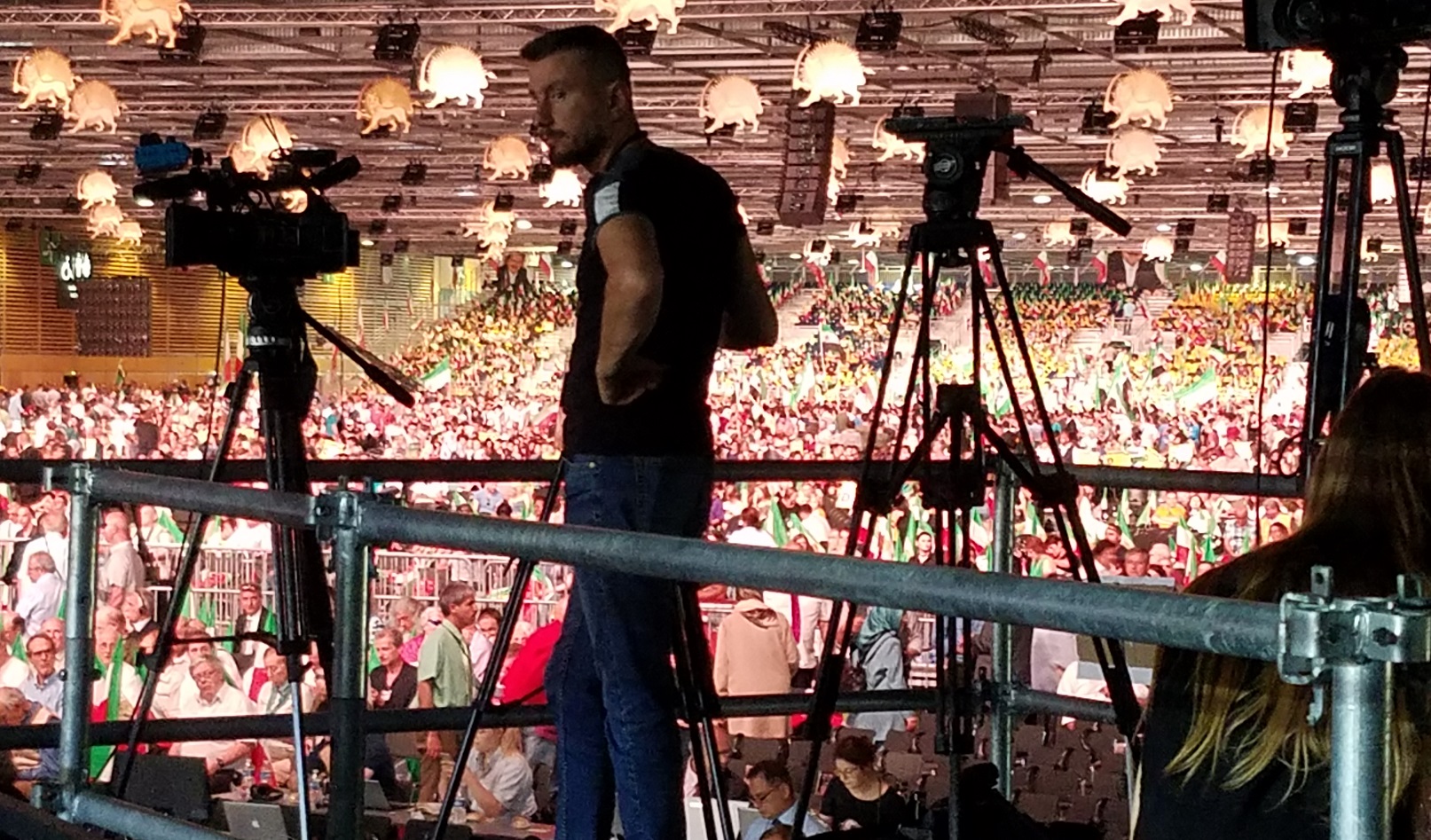