As if college tuition isn’t enough larceny, the higher ed people have another racket.

Academic books are overpriced, and a reward for most professors for being good Leftist soldiers.

Truth be told, today you can learn as much on the internet as you can in any text book. Yet, colleges and universities continue to extort students, ok parents, with the exorbitant cost of textbooks.

As The Nation reported,

Mann tweeted, “Paid today for my freshman daughter’s textbooks at @lsu. $700 for one semester. She was stunned. I was stunned. How do faculty and admin allow these publishers to shake down students like this??”

To put that into perspective, the poverty line for a family of three in 2018 is $20,780, according to federal guidelines. Assuming textbooks at LSU cost the same the next semester, that $1,400 a year represents nearly 7 percent of a poor family’s annual income.

Families can’t eat textbooks. And they can’t afford them either.

No kidding. And what do you do at the end of the semester?

You sell the books back to the university for pennies on the dollar, so they can resell them to some other hapless rube.

Have you read a college textbook in a while? Likely not. So trust me, you’ve missed nothing.

Subjects are intentionally boring, so you won’t read them. Try selling one of these books in the open market, and see what you get.

The college book business is pure and simple just part of the education racket. I know, because I have a stack of books from college I barely opened while there, and will never reference again. I took some dumbass class, because I was FORCED to take the class that funded some Leftist professor’s lifestyle and further his or her ability to poison the minds of generations of students. At my college they called them “core” classes. The objective of “core” classes was to round out a student’s “core”. Because their parents obviously failed, right. At the very least there are gaps in people’s cores, so we need “Gender Studies” and “Diversity 101”.

“You’re already paying thousands of dollars to get into school; you shouldn’t have to pay ridiculous amounts to actually do it,” said D’vasha Hodges, 19, a sophomore nursing student at Bradley University in Illinois who has paid, in some cases, $300 for a required text that she wouldn’t have been able to afford without financial aid. “Some professors expect you to have your books on the first day of class, but if your financial aid hasn’t gone completely through, you have to wait.”

And many “professors” market their own books to students. Books they couldn’t sell in the free market, if they put a gun to people’s heads.

Such is the farce of higher ed. A mechanism to expand Leftism at taxpayers’ expense, and in multiple ways.

Believe it or not, you can actually rent college textbooks!

You know something is expensive if you can rent it. You need your college books now and supposedly as reference material in your future job. It’s not like books are a back hoe or jack hammer, in other words something you use sparingly.

Yet, they offer them for rent!

Yes, they are so expensive, you may need to get your textbooks on a “by the bite” plan. I’m surprised they don’t have layaway for college textbooks, so poor people can afford them.

I pulled up “History” on one site, and lo and behold. 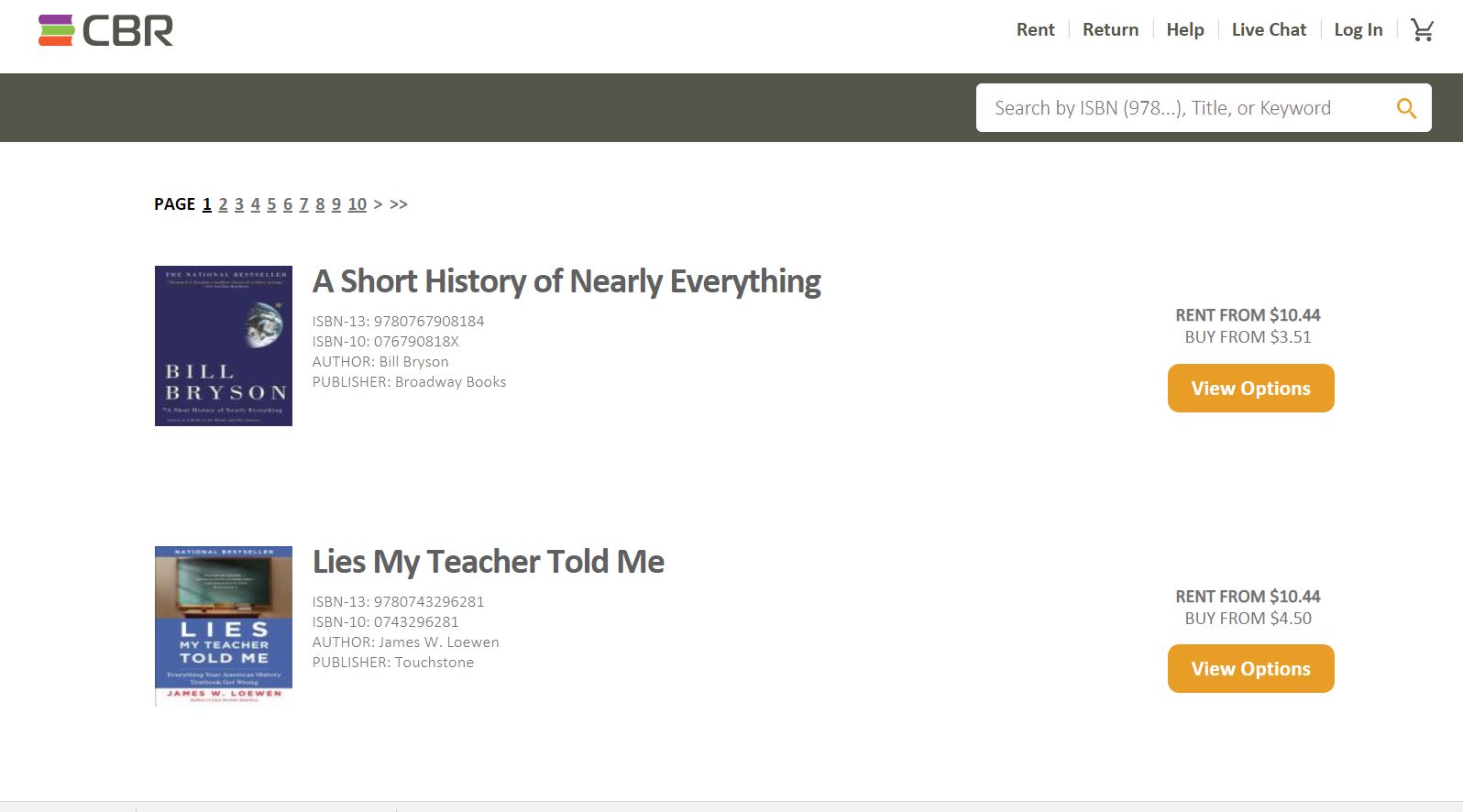 Illogical, unless you understand that they have made more money off these books than you can imagine, as these books have been used more than a prostitute on nickel night. Now the book stores want people to BUY the old books they’ve recovered for “pennies on the dollar” multiple times.

What is the cost of the BEST book you’ve ever bought from a book store? Not a first edition, just your favorite book. If you paid more than $35 you likely got ripped off. Look at what college books cost.

Academia is an industry that feeds itself, and quite well. And the profits come from those who believe that the professional academic bureaucrats do it for the kids. They do it for the profits.