The man whom the Left claims is black Superman can’t seem to influence elections, even when he helps candidates cheat.

Obama couldn’t drag Hillary Clinton fat political ass over the finish line, and apparently he can’t do it for others.

President Barack Obama announced an endorsement list of 81 Democrats for the Congressional midterm elections and even some candidates for Governor and state-level races.

But he did not signal support for rising Socialist Alexandria Ocasio-Cortez who surprised the political establishment by defeating prominent Congressman Joe Crowley in New York.

We all know the outcome of that race, as Ocasio-Cortez soundly defeated Crowley.

Apparently Obama’s non-support is what candidates really should seek.

“Mr. Obama would you please publicly NOT endorse me!”

So what does this mean for Ocasio-Cortez?

Honestly, Obama was smart not to endorse Ocasio-Cortez, though their ideologies match perfectly. He recognizes in her what other Democrats refuse to see: worthlessness.

As for the big picture, the Ocasio-Cortez win demonstrates the big problems for Democrats.

First, Obama’s endorsements mean nothing. He is not popular, simple as that. I tweeted,

And second, the Democrats still don’t know what their message is. Are they Democrats, Socialist, or the hyphenation of the two?

Don’t ask them, because they certainly have no answer. Nor do they have a message. Don’t believe me, Google it. I did, and here’s what came back. 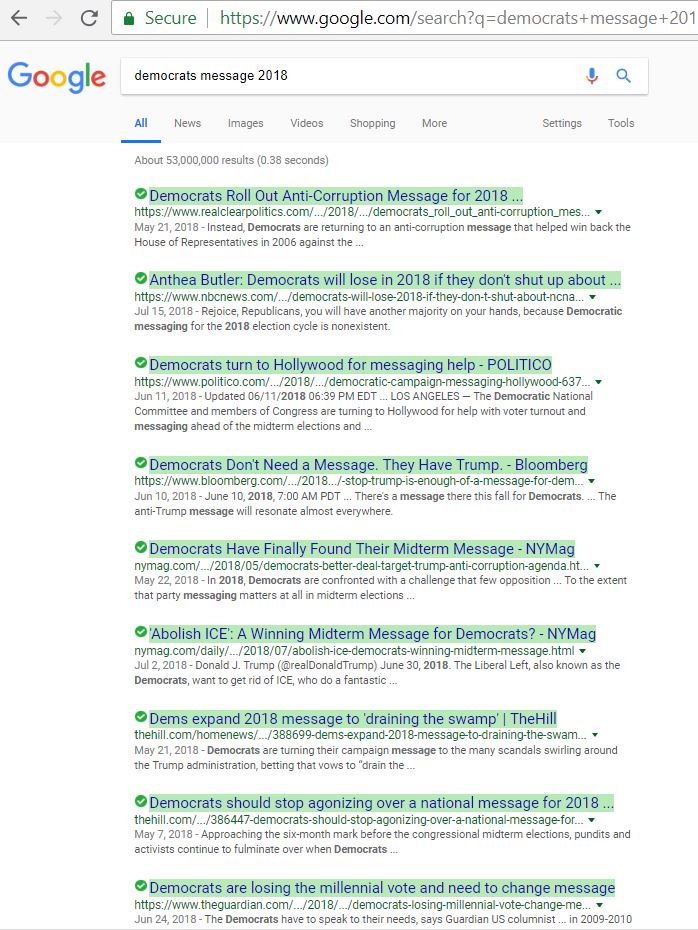 Anti-corruption message is the first entry. The party of corruption, tied to spying on the Trump campaign, and Russian influence peddling wants to be the anti-corruption party. Don’t be surprised if you haven’t heard this message. I’m sure it didn’t poll well.

One message is to shut up about {shhh} impeachment.

In one case they want to piggy-back on President Trump’s message to “drain the swamp”. I think that one is taken, and we all know, Trump will sue their asses.

Ironically, the next message after “stop agonizing” reads, “Democrats are losing the millennial vote and need to change message”. What message?!

Back to Obama’s endorsements

“I’m proud to endorse such a wide and impressive array of Democratic candidates – leaders as diverse, patriotic, and big-hearted as the America they’re running to represent,” Obama said in a statement sent to reporters.

Unfortunately, Obama’s lack of endorsement won’t help a few Democrat politicos who have found themselves shoved under the bus.

Almost all those candidate are certain to lose. And you can bet President Trump knows the political landscape and will chime in where necessary to insure a Republican-controlled Senate and House.

Because unlike Obama during the mid-terms, Trump is highly sought after for support. Name me a true Republican candidate who would turn down Trump, if he said he would campaign with them? Exactly.

So when you hear an unfavorable poll, just look to the rallies. They are the true barometer of America. As for Obama rallies, don’t expect any, at least not any that don’t include Jay-Z, or other notables.