Sure, Trump’s successes of almost every front angers the Left to no end. The man they called incompetent upstaging Obama hurts the Left to its rotten core. As Trump daily demolishes the failed legacy of Obama, ironically the Left must plot to stop him.

Stopping Trump however, proves deliciously difficult. As the Left launches evil plots and conspiracy theories, Trump takes their weapons and beats them over the head with them. Trump’s thumping of the Left reminds me of Samson beating the Philistines with the jawbone of an ox. Except in this case Trump uses the jawbone of an ass.

If President Trump’s wholesale commitment to Make America Great Again were limited to his economic prowess, or damn near achieving world peace, that would be enough. Trump would be like Tiger Woods, who may not eclipse Jack Nicklaus’ record majors wins. But few doubt that Tiger Woods is the greatest golfer of all time. In the case of Trump, he will eclipse the greats. For many, Trump has eclipsed the venerable Ronald Reagan. And he’s just getting started.

Take a look at what’s been quietly happening with the courts.

In a report from July 2018, Pew Research documents Trump’s wholesale changes to the judiciary”

Donald Trump has successfully appointed more federal appeals court judges so far in his presidency than Barack Obama and George W. Bush combined had appointed at the same point in theirs, according to a Pew Research Center analysis of data from the Federal Judicial Center. And with his nomination of Brett Kavanaugh to the Supreme Court, Trump soon could install his second justice on the nation’s highest court, too.

Then he will likely install one to two more. But things get really dicey for the Left, when you look at Trump’s next judiciary achievements.

While a few of Trump’s predecessors going back to Jimmy Carter had also appointed a Supreme Court justice by July 12 of their second year in office, none had appointed close to as many appeals court members – the powerful judges who sit just below the Supreme Court level. 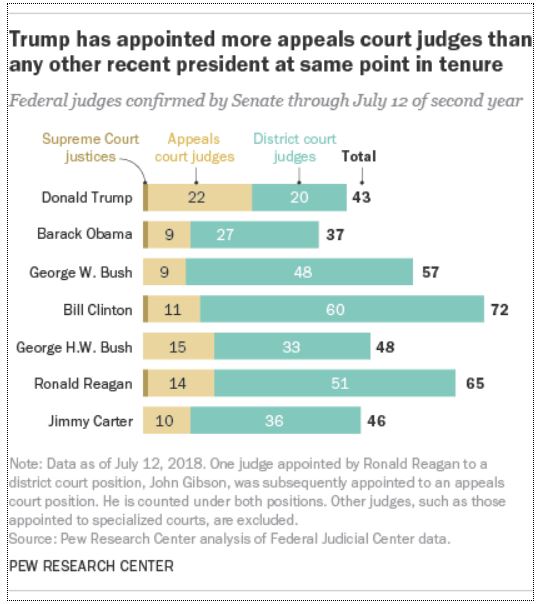 Anybody think Trump knows how to work from the top down?

First, the SCOTUS, where Trump will have appointed 2 judges, and likely as many as 4.

Second, Trump outpaces all modern-day president with federal judges with 22. You can bet that the Trump team has a strategy for district judges.

NY Times tweeted this about Trump and judges:

After just 18 months, Trump has “flipped” two circuits — the Sixth and Seventh — from liberal to conservative.

Two more — the Eighth and the 11th — are on the verge of tipping.

Hugh Hewitt shed light on what’s Trump’s impact to the courts in this article.

Trump has appointed 21 of the 167 current full-time judges and intends to fill an additional 20or more vacancies by year-end. The president and the GOP-controlled Senate have thus already put one-eighth of the federal appeals bench in their seats. Each of those new appointees — all principled “originalists” in the mold of the late Justice Antonin Scalia — will have more than 400 participations in 2018 alone. There are 10 more appeals court nominees in the queue and a dozen other vacancies awaiting nominees beyond those, and Senate Republicans have made these positions their priority (unless there is a retirement on the Supreme Court). With the age of initial appointment dropping and retirement age advancing, we can reasonably expect Trump- ­appointed judges to average 20 years on the bench. Expect a total of 40 new appeals court judges by the end of Trump’s first two years.

If this holds, expect that Trump will have appointed up to 80 appeals judges by the end of his term, versus 55 for Obama.

To assess Trump’s impact, read the annual report of the U.S. Court of Appeals for the 5th Circuit. The president has already nominated four of the 15 active judges on that circuit and is soon likely to fill the two remaining vacancies. Each active judge has averaged between 144 and 163 opinions per year for many years. We can expect that, if past is prologue, each of the new judges will author about 150 opinions from among the hundreds of opinion-generating cases in which they participate annually.

The Trump judges on the 5th Circuit and their new colleagues on other federal appeals benches across the land will be busy long into the future. Review the math presented above, and extend the trends into the future, including another 20 or so more federal circuit court confirmations expected this year. By 2019, Trump judges will be participating in more than 15,000 decisions every year, and almost all those decisions will be the law of the land. There will be no fewer than 400 crucial case votes and dozens of signed opinions, each year, every year for most of the Trump judges. If the judges sit for an average run of 20 years on the bench, that’s 8,000 key votes per Trump-appointed judge.

The critiques from the #NeverTrump rump have always been heated and sincere but also unbalanced by any appreciation for this remarkable record of repair of the bench. The Third Branch looks today and will look for decades into the future far more originalist because of Trump compared with how it would have been under Hillary Clinton.

Even if the Democrats impeached Trump and for some reason he resigned, Trump remains the Tiger Woods of politics. And he’s ready to become Samson, should he need to use that jawbone.