In what must vex the Left to no end, Brett Kavanaugh is going nowhere.

In their zeal to get rid of Kavanaugh, Leftists ended up strengthening his resolve. Thus, according to Fox News:

An embattled Brett Kavanaugh on Monday said he won’t be “intimidated into withdrawing” his nomination to the Supreme Court, as he called accusations he sexually harassed and assaulted women decades ago while in high school and college “smears” in a new letter to top lawmakers on the Senate Judiciary Committee.

Because the Left wanted to see Kavanaugh high-tail it and run like the wind. I can’t help wonder if Kavanaugh’s stance is a result of Donald Trump being in the White House. Trump has a way of strengthening the resolve of many.

Kavanaugh, who intends to testify Thursday before the committee about the allegations along with the first accuser, has been hit with fresh but uncorroborated accusations.

“There is now a frenzy to come up with something—anything—that will block this process and a vote on my confirmation from occurring,” Kavanaugh wrote. “These are smears, pure and simple. And they debase our public discourse.”

I wrote not long ago that I hope Kavanaugh takes some of this Leftist reality into his decision-making with him. An understanding of the Left will certainly help Justice Kavanaugh with his rulings.

Here is part of the letter, and the link to the actual letter. 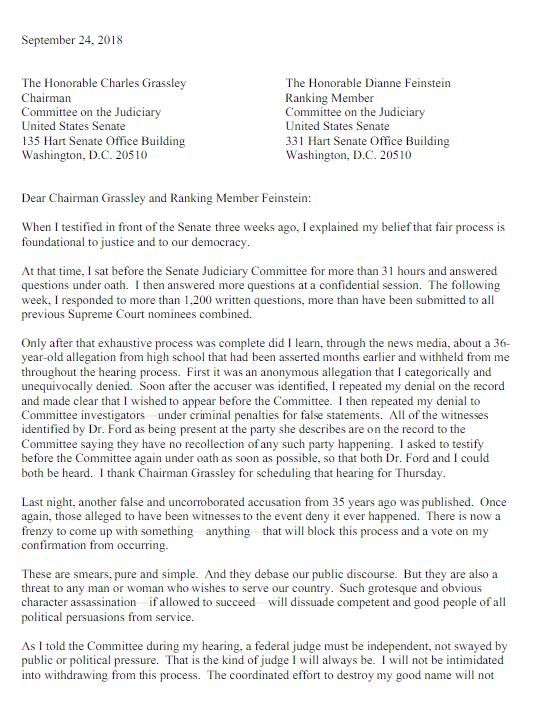