How Many Abuse Victims at the Hands of Keith Ellison

As if the Democrats don’t have enough problems!

The Mueller investigation has spun, only to bite the Democrats with the real suffering to occur in the mid-terms, and now they have another scandal on their hands.

When the Democrats decided to attack men with their feminist attack dogs, they likely thought they would ensnare people like Donald Trump. Instead, they wrecked their own institutions.

Harvey Weinstein set things off, but there seems to be no end in sight. Media moguls have gone down, people like Charlie Rose and Matt Lauer to name just two. There have been a cadre of powerful politicians, like disgraced former Senator Al Franken. Finally, titans of industry have stepped down in the wake of allegations of sexual abuse.

Now, it appears their #MeToo movement has struck again. This time again in politics. These allegations are pointed at Congressman Keith Ellison (D-MN).

The allegations surfaced recently when the son of a former girlfriend reported that Ellison abused his mother. Ellison pulled a “Bill Clinton” and denied the allegations. But, then there were TWO.

A second Minnesota woman accused Congressman Keith Ellison of domestic violence. And a police 911 report confirms the incident thanks to work of Laura Loomer.

According to Laura Loomer, a cover-up was involved.

Amy Alexander is a Democrat activist who said she was having an affair with Ellison. In 2006, she wrote an article called “Coming Out Of The Dark: Breaking The Silence About The Anointed Candidate. The article was published by the Wright County Republican . 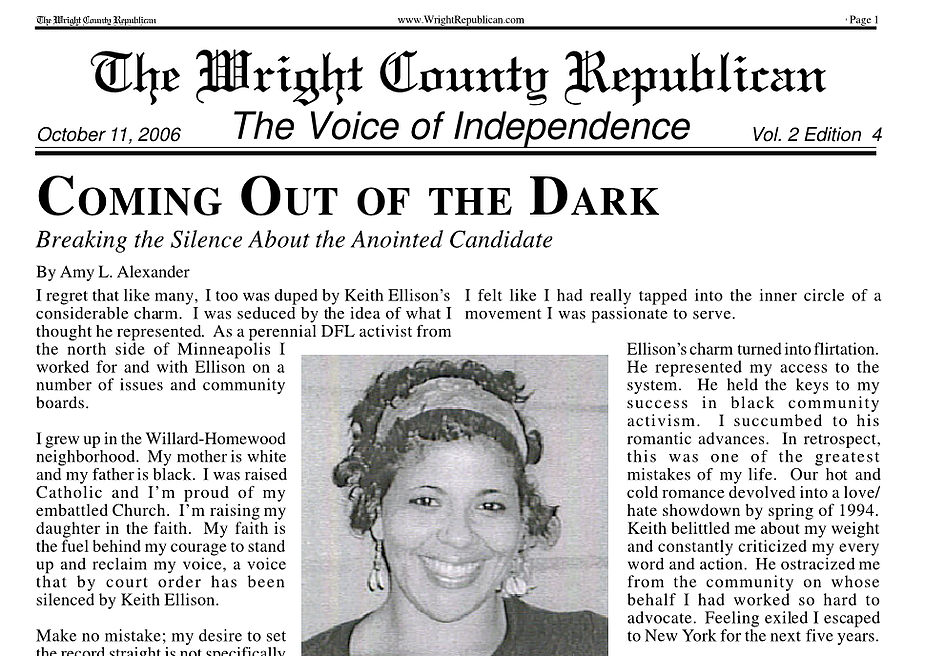 In the article, Alexander says her affair with Ellison began in 1993, while he was still married to Kim Ellison.

Alexander said her relationship with Ellison went downhill, which prompted her to move out of state.

According to Alexander, her on and off relationship with Ellison continued in 2004, but it quickly ended in May 2005, when she claims Ellison arrived at her house uninvited and assaulted her, causing her to call 911 and report the domestic assault.

“In May, Keith wanted to try and quiet me so he came to my home uninvited,” Alexander wrote. “We had words. His anger kicked in. He berated me. He grabbed me and pushed me out of the way. I was terrified. I called the police. As he fled he broke my screen door. I have never been so scared.”

Now, Keith Ellison the abuser of multiple women wants to be the next Attorney General of Minnesota.

And believe it or not, the Democrats now provide cover for him, especially black Democrats. They need a radical Muslim for attorney general, their strategy to win back the states.

The only fitting end to this story is Ellison who voluntarily left Congress lose the election for AG and be forced to get a real job.

A man like this should not be in public service, nor should he have the power of the AG’s office.

Let’s see if the Democrats gain some scruples and support their feminists? Or will another politician suffer the fate of #MeToo?