The excuse to ignore Blasey Ford’s past is that she’s the victim of Brett Kavanaugh.

But that’s flatly a lie. The reason Democrats don’t want the Blasey part of Ford’s past examined is it speaks directly to her allegations against Brett Kavanaugh, and not in her favor.

Examining Blasey’s past would undoubtedly shine the light on Blasey’s drunkenness and promiscuity.

As I’ve said, I couldn’t care less about her drinking or what she did with her body. But it certainly does speak to issues related to her accusations. Anybody looking into this matter would agree.

For example, Democrats examined Brett Kavanaugh’s drinking as it relates to his demeanor, and his ability to be a SCOTUS judge. Well doesn’t the same scrutiny apply to Ford’s credentials as a psychologist?

Democrats demand an FBI investigation into Kavanaugh, but you can bet they will squeal like stuck pigs when it is suggested that the FBI will need to examine Ford’s past. And God forbid the FBI examine all information exchanges from Senator Feinstein, her staff, other Kavanaugh accusers, including phone calls, emails, and texts. 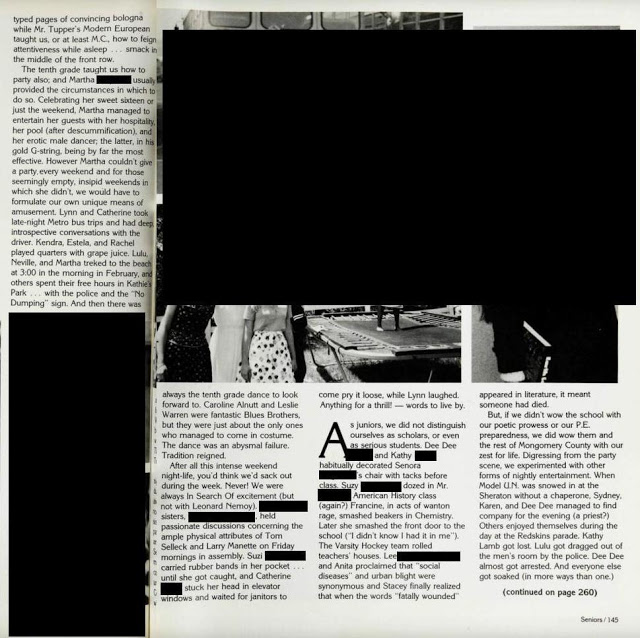 But this site captured much of it, sensing that somebody might eventually do so.

AND IT WOULD BE AN ACCURATE HEADLINE. THAT’S WHY THE YEARBOOKS HAVE BEEN SCRUBBED. THEY ARE A TESTAMENT TO THE INCREDIBLE POWER THESE GIRLS HAD OVER THEIR TEACHERS, PARENTS AND THE BOYS OF GEORGETOWN PREP, LANDON AND OTHER SCHOOLS IN THE AREA. IN THE PAGES BELOW, YOU WILL SEE MULTIPLE PHOTOS AND REFERENCES TO BINGE DRINKING AND THE ACCOMPANYING JOY OF NOT BEING ABLE TO REMEMBER ANY OF IT.

THESE YEARBOOKS ARE, THEREFORE, RELEVANT TO THE NATIONAL INVESTIGATION NOW BEING CONDUCTED IN THE MEDIA, IN HOMES, AND IN THE HALLS OF CONGRESS. AND THEY SHOULD NOT HAVE BEEN SCRUBBED. IF BRETT KAVANAUGH’S YEARBOOKS ARE FAIR GAME, SO ARE THESE.

AND YOU WILL WONDER WHILE READING THEM, WHY THE HELL DID THE FACULTY APPROVE OF THESE YEARBOOKS? WHY DID THE PARENTS TAKE OUT PAID ADS IN THESE YEARBOOKS? ANIMAL HOUSE HAD NOTHING ON THE INFAMOUS “HOLTON PARTY SCENE”.

There is much to review at the website, complete with redacted pages and graphics.

But this one really caught my eye, as it more directly speaks to how Blasey and many of her classmates seemed to be when it came to drunkenness and men:

ALSO NOTE THAT AT THE BOTTOM OF THE CAPTION ABOVE, THE GIRLS MENTION THEIR MALE CONQUESTS WITH GREAT PRIDE:

“NO LONGER CONFINING OURSELVES TO THE WALLS OF LANDON AND PREP, WE PLUNGED INTO THE WATERS OF ST. JOHN AND GONZAGA WITH MUCH SUCCESS.”

“BEACH WEEK CULMINATED THE YEAR FOR THOSE OF US LUCKY ENOUGH TO GO. WITH SCHOOL AND OUR MINDS IN TEMPORARY RECESS, WE WERE ABLE TO RELEASE ALL THOSE TROUBLING INHIBITIONS OF THE PAST YEAR. WHILE DANCING IN THE MIDDLE OF COASTAL HIGHWAY, ANN [REDACTED LAST NAME]AND FRIENDS PICKED UP SOME MEN WHO PASSED OUT IN THEIR APARTMENT…”

Ask yourself why a yearbook that depicts the real Blasey Ford has been scrubbed.

Another part of the article that is worth mentioning,

NOW WE TURN TO THE FINAL SENTIMENTS FROM SCRIBE 84, CHRISSY BLASEY’S SENIOR YEAR AT HOLTON-ARMS. PAGE 261 GIVES THE PARTING SENTIMENT OF HER SIX-YEAR HOLTON EXPERIENCE. THERE ARE TWO RELEVANT QUOTES. THE FIRST CHARACTERIZES THE SENIOR GIRLS AS SEXUAL PREDATORS UPON YOUNGER BOYS:

“OTHER SENIORS PREFERRED TO EXPAND THEIR HORIZONS AND DATE YOUNGER MEN, USUALLY SOPHOMORES, WHO COULD BRING THE VITALITY AND FRESHNESS OF INNOCENCE TO A RELATIONSHIP.”

THE HOLTON GIRLS CLEARLY PORTRAY THEMSELVES AS THE SEXUAL PREDATORS HERE.

So these girls had been around the block as they say. They saw Sophomore boys as fair game.

I understand Democrats will say that revealing this information is putting the woman on trial. But what if it turns out that Blasey Ford loved sex, and decided to have it with many partners and as often as possible?

As for me, I repeat: it’s her life. I have no judgment that matters. But what if turns out that this night Blasey Ford can’t remember completely is because she learned how to party this way?

And if this party indeed happened, what if she’s accusing the wrong guy? Would she really even know, epinephrine notwithstanding.

If you are still in the Blasey Ford camp, I have a final question:

Would it have made a difference in her response about knowing 100 percent that Kavanaugh was the culprit, if she knew that we knew of her passed out drunk pass?