Right after I was fired from Fox News, Aidan McLaughlin asked me to do a hit piece on Fox News.

I declined. Just like I declined many other “fake news” media outlets. Because I know they would take what I said out of context. 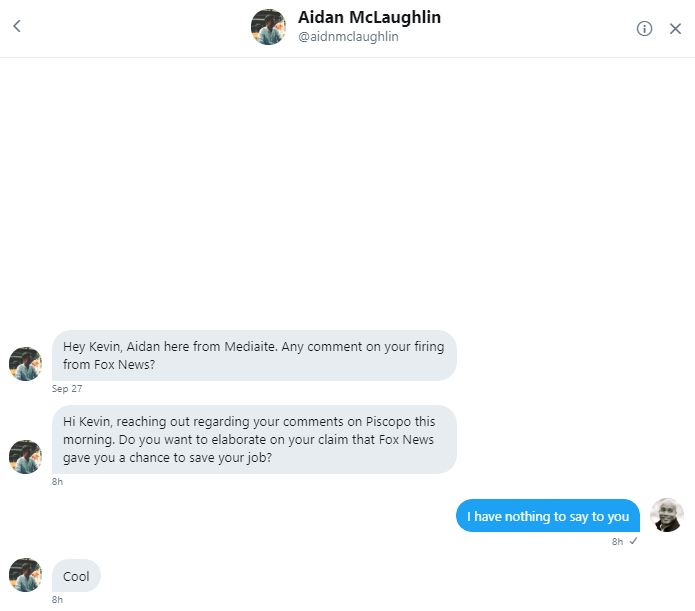 I’m sure McLaughlin decided to follow me in his proverbial pickup, waiting for the chance to put that noose around my neck. More on the attempted hanging in a minute.

When asked by my friend Joe Piscopo over the weekend to do his radio show, I accepted. During the interview, I restated my position on Leftist women, forcefully. I wanted the audience to understand that I stood on principle. The Kavanaugh hearings hit me particularly hard, as I have historical understand of the situation. Recently, Bill Cosby, and perhaps more historically, “To Kill a Mockingbird”.

First the most recent farce of Cosby. It’s not a matter of belief or not of Cosby, it’s one of due process. He got none. Hearsay and innuendo is all it took to bring this man down. Too bad he wasn’t Bill Clinton, eh McLaughlin.

Thus, the real issues lies in history and the racist period of Democrat domination of politics. A time when black men were lynched for the charade I witnessed happening to Brett Kavanaugh during the Senate hearing.

Don’t expect Mediaite and Leftist click-seekers to actually know history, as that would ruin their worldly view of Leftism. Today, Leftists pick and choose their outrage, like they change underwear. In fact, Aidan McLaughlin enjoys the lynching he believes he’s giving me, as he tries to pit me against Fox News.

His rag quickly jumped my ass after my firing. You can bet those at Mediaite enjoyed taking down a Fox News contributor, as that is one of the ultimate wall mounts in their trophy room. I can only imagine the bounty for the head of a black Conservative?

I posted many of their tweets and other message to me, freely and openly calling me a “nigger”. One guy even warned that I should watch my back…forever. 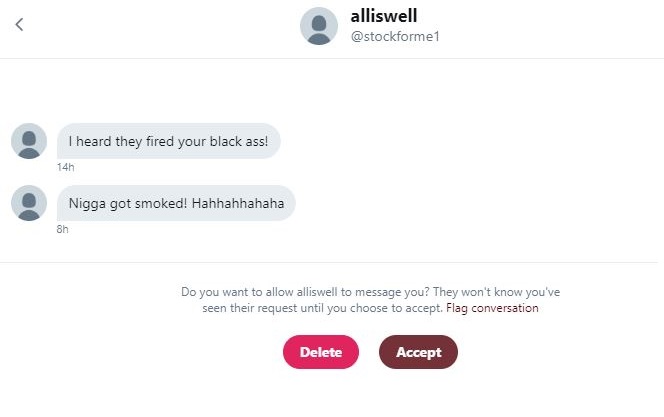 My crime? The use of the word “skank”.

As if that offended the sensibilities of people who called Ivanka Trump a “feckless cunt” and Sarah Palin a “twat”.

The side who glorifies entertainers who refer to women as “bitches and hos”, clamoring for the next interview of some hip hop artist.

Mediaite can try to use me as the whipping boy for understanding the racist past of Democrats realized in the attempted character assassination of Kavanaugh. That, by the way is the stance taken by ALL the Senate Democrats took, including two black tokens, namely Corey Booker and Kamala Harris.

In my interview, I chastised the lying women ruin the careers of good men, or worse get men lynched. That is the sordid history of Democrats, then and now. 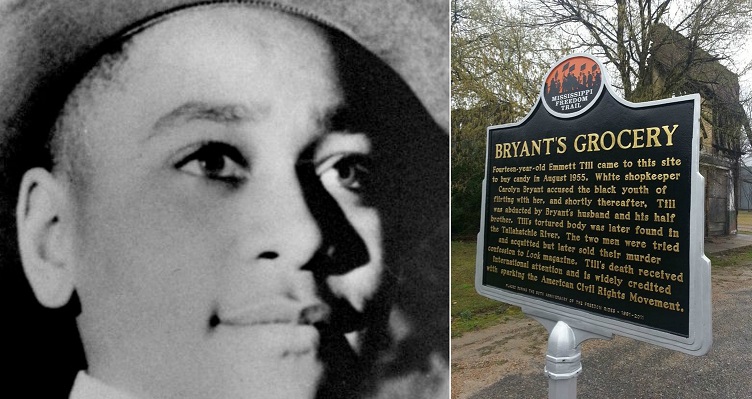 This black man recognizes Jim Crow when I see it. Even if it’s disguised under the auspice of “media” at Mediaite.

And as for the hearings, I can only imagine the ghost of Emmett Till sitting in that Senate chamber watching Kavanaugh’s anguish. The 14-year old black child lynched for supposedly whistling at a white woman in 1955 would like have said to himself. Perhaps, “Now guilty until proven innocent applies to ALL men!”

I said in my interview I had the opportunity to save my job. I refuse to elaborate on that subject, as it was a private phone call with a friend of mine at Fox.

I chose a different path, and Fox chose theirs. I was fired. I didn’t read a single report on my termination but later heard that Fox called my tweet, “reprehensible”.

On the Piscopo show, to make a bigger point, I mentioned Ed Henry’s and Jesse Watters’  infidelities, to put in context “reprehensible”. I made that very clear during the interview as well.

My point is that Fox could have done a better job with their statement about my departure, and used less “skanky” word choice.

I have no animosity towards the organization, as they acted in their own interests, certainly within their purview.

Fox and I disagree on what is reprehensible. Simple as that.

I can only guess what pisses McLaughlin off is that I refused his interview. Don’t know, don’t care.

Note I didn’t link to McLaughlin’s article, as he’s a click whore. Those interested can research it for yourselves. Unfortunately for McLaughlin, this black man won’t be his whipping boy and I won’t be lynched.