The media in this country continue to twist themselves into pretzels trying to blame the recent horrific attack on the Jewish synagogue Donald Trump’s fault.

Yes, the media types insist Trump’s “violent language” is the cause for 11 Jewish worshipers being murdered.

For example, take a look at this reporter from CNN trying to get Rabbi’s to agree with him that Trump is to blame.

The disgusting politicization of this attack by the leftist mainstream media has hit a new low, even for them.

Since the left and their crooked media lapdogs seem to all of a sudden be concerned with the Jewish community let us explore why they haven’t covered the growing anti-Semitic language within their own party?

You may recall recently Islamic leader, Louis Farrakhan, who tweeted a video clip of a speech in which he denied that he was anti-Semitic, with the caption, “I’m not an anti-Semite. I’m anti-Termite.”

Farrakhan was addressing a gathering in Detroit recently to mark the 23rd anniversary of the Million Man March, and used it as a platform to launch yet another attack on Jews, calling them “termites.”

And in case you wanted to know, this tweet still remains on the Twitter platform. No one ever bothered to remove it, despite many reports of his abusive language.

Now, none of these comments are shocking as Farrakhan is a known racist and Jew hater. He’s declared, as recently as 2018 that “the powerful Jews are my enemy,” and “white folks are going down.”

But what is interesting to note is how may Democrat leaders have refused to denounce Farrahkan’s racism and still associate themselves with him.

You may recall earlier this year a photo of Obama surfaced of then the junior U.S. Senator from Illinois after a “career” as a neighborhood organizer attending a meeting in 2005 with Louis Farrakhan. 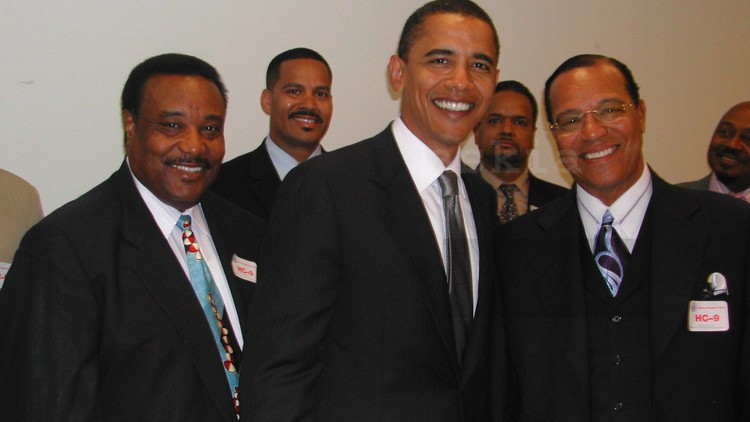 Attorney and staunch pro-Israel activist, law Professor Emeritus Alan Dershowitz, said that he would not have campaigned for Obama had he known about the photo.

It’s no wonder the photographer refused to share the photo in question until after Obama left office.

And what of Keith Ellison?

You think Obama is the only black Democrat to have associated himself with the likes of Louis Farrakhan?

Think Again. As Ellison tries to distance himself from Farrakhan, Farrakhan admittedly met with Ellison as recent as 2 years ago.

In addition, all 21 members of the Congressional black circus refuse to denounce Farrakhan, including high-profile Trump critics like Maxine Waters and Al Green.

Both Waters and Green are on tape hugging Farrakhan in 2006, a year after the CBC’s secret meeting in 2005 with the hate-group leader. The videos of Waters and Green resurfaced in a Wall Street Journal column following the publication of a photo of former President Barack Obama smiling with Farrakhan at the 2005 meeting.

The three women who organized the vagina head march on Washington after Trump was inaugurated as president continually defend Farrakhan as well:

Tamika Mallory, one of the leaders of the Women’s March on Washington, was personally present at Farrakhan’s lecture in Chicago in 2005.

And anti-Semite Linda Sarsour spoke at a Nation of Islam event three years ago. And all three have defended Farrakhan.

Furthermore, and most alarming, many Democrat’s running for House seats this November are both pro-Palestinian and anti-Israel.

A Palestinian-American Muslim running in Detroit; Ms. Ocasio-Cortez, running in a heavily Democratic district in the Bronx and Queens.

And Leslie Cockburn, co-author of “Dangerous Liaison: The Inside Story of the U.S.-Israeli Covert Relationship,” who is running in a Republican-leaning district in Virginia.

Ms. Tlaib for example, in an August interview with the liberal magazine ‘In These Times,’ endorsed a one-state solution that could jeopardize Israel’s status as a Jewish state.

“It has to be one state,” she said. “Separate but equal does not work.”

Additionally, Tlaib in a different interview said she would “absolutely” slash military aid to Israel, adding,

“I will be using my position in Congress so that no country, not one, should be able to get aid from the U.S. when they still promote that kind of injustice.”

Do you think any comments laid out above made any headlines on the mainstream media? No, nothing.

No words of condemnation from the liberal leftist establishment. And absolutely no acknowledgement of the negativity this kind of language has on Jewish communities.

Meanwhile, we have a current president who dared to do what no other president since the 1990’s has been able to do and that’s move the United States Embassy to Jerusalem, the capital of Israel and the Holy City despite massive protests.

And oh by the way, Trump is the first president in history to have a Jewish son-in-law, daughter, and grandchildren.

Furthermore, Trump strongly stated at a recent rally in Illinois:

So, we now have all the facts laid out. Can you tell me which party is more hostile towards the Jewish community?

The radical democrats in the democrat party have not hid their intentions of how they wish to run this country and foreign policy. They tell you exactly who they are.

Are you paying attention?