Democrats lost touch with the common man years ago.

This happened when Democrats figured out that the common man isn’t paying too close attention.

For those who do pay attention, the Democrats manipulate, indoctrinate, or both. Those not manipulated or indoctrinated face targeting.

Democrats used the playbook: Alinsky’s Rules for Radicals, and the tactics worked like a charm. Divide and conquer, seek and destroy. Finally, use fear as a weapon.

For decades these tactics worked phenomenally well. The political playing field is littered with bodies of good men and women. Even more never got on the playing field having been given the rules of engagement.

Who could change the game, but the bombastic billionaire bad boy. A mogul turned reality TV show star, who had dabbled in politics for decades. An insider who knows how the game is played.

And now we have black men wearing MAGA hats in public. No, not just Kanye.

As Benny from The Daily Caller tweeted:

There is a lone, black Trump supporter here wearing a MAGA hat in front of the Supreme Court. He is being be surrounded by white woke liberals screaming & calling him a “racist bigot.” Not joking. He’s being calm & articulating points. Liberals are hysterical & intimidating

There is a lone, black Trump supporter here wearing a MAGA hat in front of the Supreme Court. He is being be surrounded by white woke liberals screaming & calling him a “racist bigot.”
Not joking.
He’s being calm & articulating points.
Liberals are hysterical & intimidating. pic.twitter.com/tEhw5XntCz

This is a much bigger deal that one might think. A black man wearing a MAGA hat in DC.

Then, he goes into the belly of the beast to show off his hat.

Democrats be afraid. Be VERY afraid!

Barack Obama recently emerged from his rat hole to get into the political fray.

This Politico report is from Sept 5:

Barack Obama will launch his midterm campaigning this weekend, following a speech on Friday meant to lay out the case against what he’ll call President Donald Trump’s dangerous authoritarian politics.

And he’ll start by emphasizing the battle for the House.

This was to be a big deal for Democrats, akin to Hillary Clinton’s announcement of her “not so secret, secret weapon Bill Clinton. We all know how that worked out for the Clintons. But with Obama joining the Democrat rank and file, things would be different.

I wasn’t buying it.

On my radio show, I commented that Obama would return down the rat hole as quickly as he emerged. I said he would be gone within a week, two at the most.

It happened almost immediately. Look for yourself. 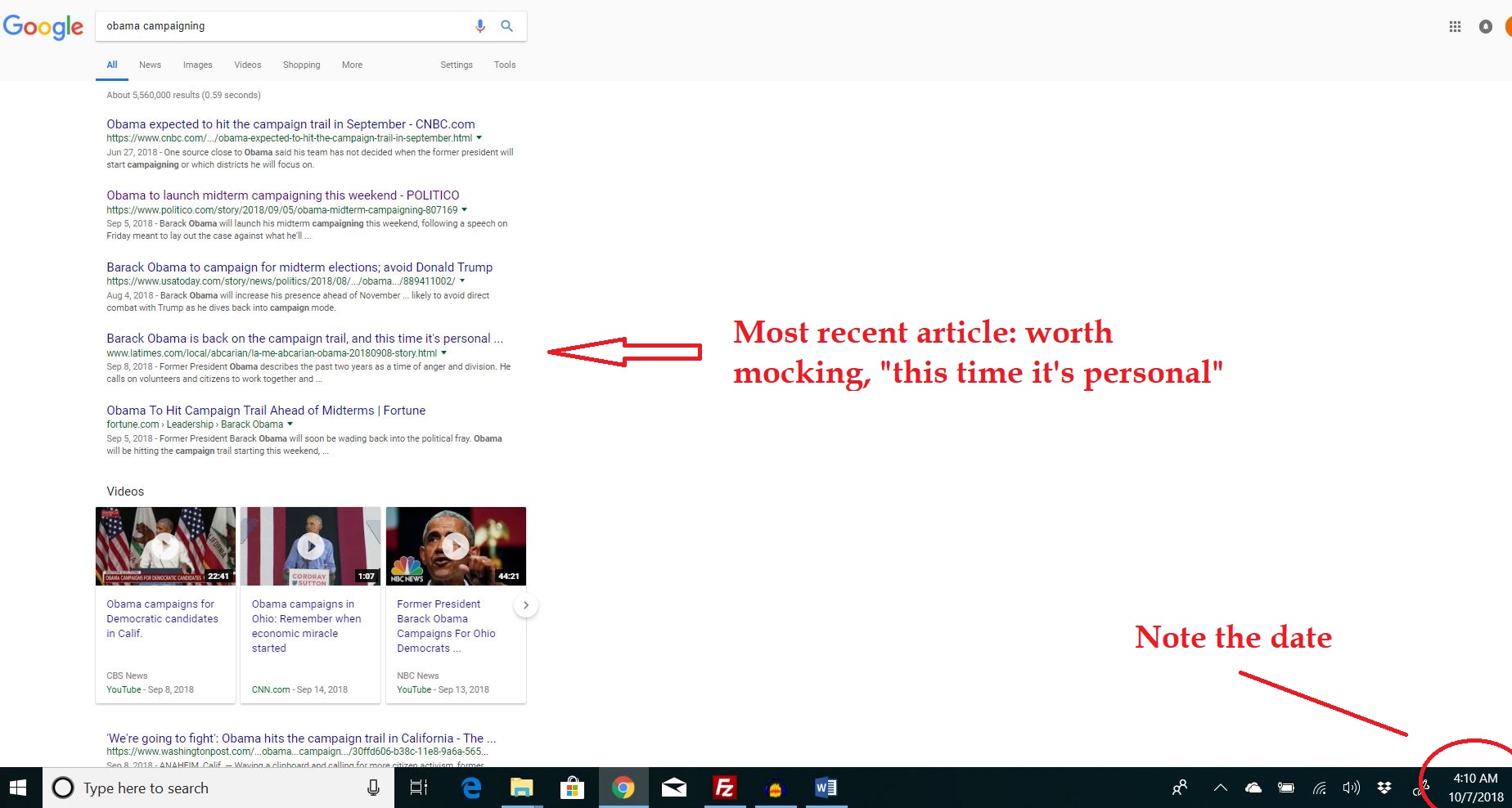 As the graphic above shows, Sept 8 is the most recent article about Obama’s re-emergence on the campaign.

Clearly, not a single article written about Obama campaigning. Keep in mind that I captured this on Google on October 7, a full month after the big splash.

Where is Obama? I asked Google, and here’s what I got. 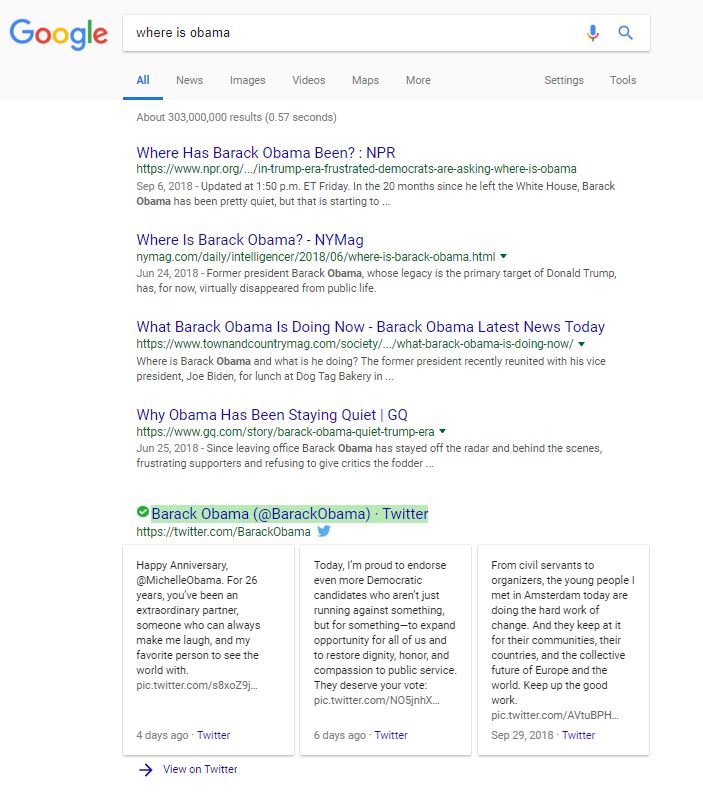 He congratulated Michelle on their anniversary. He likely tweeted this from a beach walk with Reggie Love, but I can’t say for sure.

He next entry is a tweet from 6 days ago, according to Google. Here is Obama’s big commitment to Democrats:

Today, I’m proud to endorse even more Democratic candidates who aren’t just running against something, but for something—to expand opportunity for all of us and to restore dignity, honor, and compassion to public service. They deserve your vote: pic.twitter.com/NO5jnhX3XD

While his party lies on the battlefield in triage, Obama gallivants overseas:

From civil servants to organizers, the young people I met in Amsterdam today are doing the hard work of change. And they keep at it for their communities, their countries, and the collective future of Europe and the world. Keep up the good work

From civil servants to organizers, the young people I met in Amsterdam today are doing the hard work of change. And they keep at it for their communities, their countries, and the collective future of Europe and the world. Keep up the good work. pic.twitter.com/AVtuBPHdr2

Hey Democrats, I don’t think Barack is taking this election too seriously.

ALL references were to her presidential loss. So I asked a different question. Is Clinton helping Democrats. Here’s what Google said: 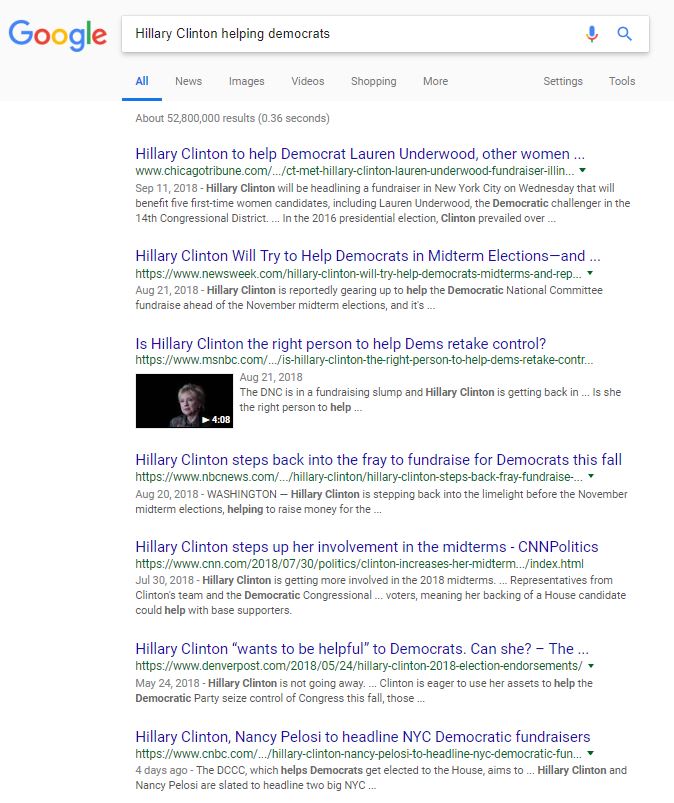 The most recent of these articles referenced fundraising events with Pelosi and Clinton. I know, I was shocked too.

Below is a snippet from the article:

An influential Democratic fundraising committee is turning to two of the party’s most experienced and prolific moneymakers — Hillary Clinton and Nancy Pelosi — during the final stretch of the campaign as Democrats look to seize control of Congress.

The Democratic Congressional Campaign Committee, which helps Democrats get elected to the House, is hosting a pair of New York fundraisers in October featuring Pelosi, the House minority leader, and Clinton, the party’s 2016 presidential nominee, according to a person who was invited to the events.

The events are expected to take place on Oct. 15 in Manhattan. Clinton will be featured at a lunch with some of the nation’s top Democratic donors. Later that day, Pelosi, along with Rep. Ben Lujan, D-N.M., are scheduled to be guests at a dinner, according to the person, who declined to be named.

The DCCC aims to raise $1 million at each event, just three weeks before the midterm election, the person said. Invitees are expected to contribute a $50,000 bundled donation, the person added.

The DCCC has raised just over $206 million throughout the 2018 election cycle, while spending $143 million in support of candidates, according to the nonpartisan Center for Responsive Politics.

Imagine relying on two of the most hated women in politics for your fundraising.

Speaking of fundraising, let’s look in on the Republicans. According to CNN, the Republicans achieved in July what the Democrats have only recently achieved.

The fundraising achievement, which was expected after the committee came within $900,000 of $200 million last month, is significant for a party that is trying to buck historical norms in 2018. The political party in power traditionally gets rejected at the ballot box two years after they take power, a fact that President Donald Trump has mentioned numerous times in public and private as Republicans prepare for November.

The RNC raised $13.9 million in the month of June — the most it has raised in that month in a non-presidential year — bringing its total fundraising haul to $213 million for the 2017-2018 cycle.

The committee has $50.7 million in the bank and no debt.

Democrats were caught screwing the pooch on the Kavanaugh fiasco.

No poll shows them gaining over this well-worn #MeToo strategy that once again failed miserably. Apparently, their cheap parlor tricks have been tried too many times.

So in what marks a serious departure from the norm, Democrats shifted strategy recently to address the internet giants. Now Democrats want to protect citizens from the companies who help spread the Democrats’ message of evil.

On April 10, Senators Richard Blumenthal (D-CT) and Ed Markey (D-MA) introduced new privacy legislation titled the Customer Online Notification for Stopping Edge-provider Network Transgressions (CONSENT) Act.  In a statement published on his website, Senator Markey referred to the legislation as a “privacy bill of rights” and explained that “[t]he avalanche of privacy violations by Facebook and other online companies has reached a critical threshold, and we need legislation that makes consent the law of the land.”

Too little too late.

It seems the Democrats have run out of bullets to fire at Trump.