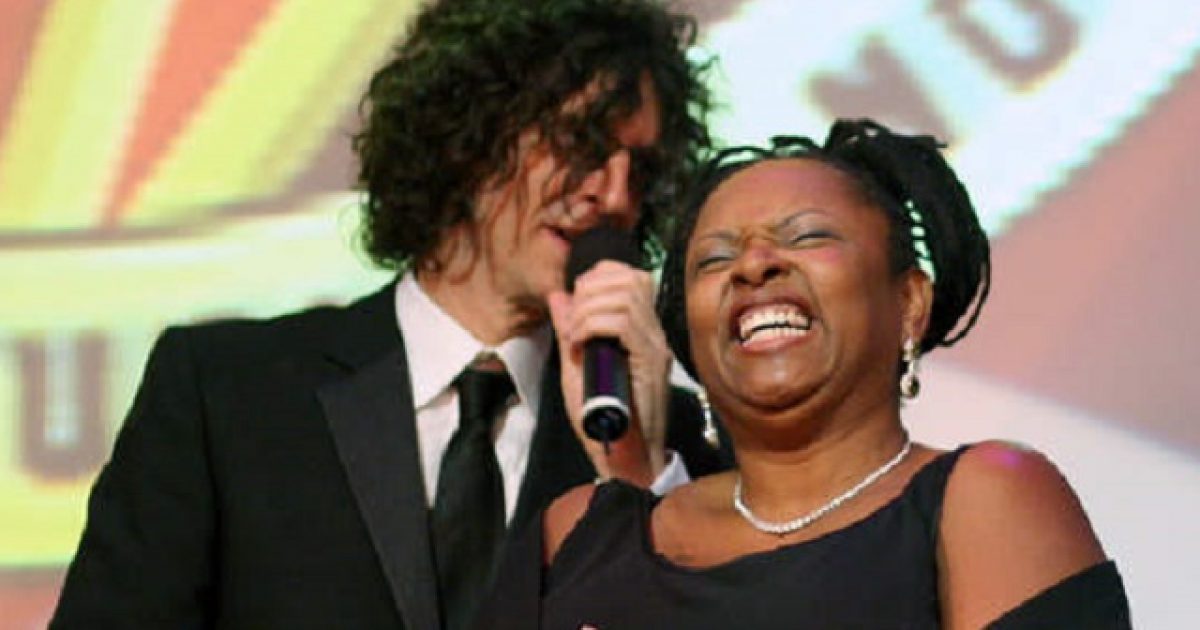 I was on Howard Stern’s show the other day.

No, Howard Stern didn’t actually invite me on in person. Instead his producer Robin Quivers found my audio clip on the Joe Piscopo show as well as some fake news media site. The two took the opportunity to score a few points with feminists.

I’d link to the segment, but honestly I suspect you’d rather watch Sumo wrestlers model bikinis. Actually, that would be entertaining.

In the segment, Stern and Quivers discussed my tweet as if I had said it on Fox News; actually, it was a tweet. That was only the first part of what they got wrong.

Most of their discussion centered around me calling the women who accused Kavanaugh of rape, gang rape, and other heinous acts, “lying skanks”. Amazing that Stern of all people would fixate on my use of the word “skank”, a benign word in the lexicon of the “shock jock”.

Admittedly, I’m not an avid listener of Stern, but I have always appreciated his work. As a radio personality, I defer to Stern as a true pioneer in radio. A man to be respected in the field, regardless of what many think about his show content.

I even watched Stern’s self-deprecating movie, and remember vividly a woman swallowing the 13 inch kielbasa. Stern’s sex-fueled shows pushed the envelope, and made the man a living legend.

Stern profits mostly from discussions of sex and watching women demean themselves on his show. Again, I have no issue with how the man makes his money. He’s just out of his league when it comes to politics.

Stern attempted to demean me for surprisingly what he doesn’t have the balls to say.

I wonder what Stern thinks of the woman who lied recently about the 4 dentists she claimed raped her. Had it not been for surveillance cameras, these 4 innocent men might very well be in prison. Let’s say they had gone to prison for a crime they hadn’t committed? What word would Stern, Robin, or members of his audience have called that woman? I’ll get back to that question.

My team posted a story about a woman sent to jail for falsely accusing two black football players of rape. Her reason? She didn’t want her new boyfriend to know about her promiscuous past.

One of the accused players, St. Hilaire commented this in a statement by his attorney:

‘I went from being a college student to sitting at home being expelled with no way to clear my name…I just hope she knows what she has done to me, my life will never be the same. I did nothing wrong, but everything has been altered because of this.’

Hey, what’s the big deal about a couple of black guys potentially sent to prison based on false accusations? The prisons are full of them, right Stern?

I mentioned Bill Cosby in my discussion with Piscopo, and Stern picked up on that.

Bill Cosby is toxic, because Leftists have made him taboo. That’s why I covered the subject; because I’m not supposed to. That’s what men with actual balls do.

As for Stern, he doesn’t see the problem with allegations against men that date back 40+ years. I clearly stated in the interview with Piscopo that I was not advocating guilt or innocence of Cosby. What I suggested is that these allegations should have been addressed years ago. We aren’t talking “cold case” murder, where the police investigated the charges and had to put the case on ice. We’re talking about opportunists, who took advantage of a society trained in political correctness. Opportunists who can’t remember the name of a sexual partner from a month ago, but who can vividly remember what Cosby did to them decades earlier.

Shocking statement by me, as Shock Jock Stern and company determined. At one point, Stern admitted, “I don’t know this guy”. And why bother to know me when it’s just fun and games for Stern and company.

That’s exactly what Leftists believe, that accusing innocent people of things they didn’t do is fun and games.

Anybody think Stern knows about 14-year old Emmett Till, a black kid lynched in Mississippi in 1955, because some white woman said he whistled at her?

Back in the day if Stern had a radio show, he would have been the creator of the lynch mob, broadcasting to the white Democrats:

As his producer read off all the information she hacked together, Stern played her sidekick for the segment. They pretended that I had some war on women, particularly Leftist women.

Well, if I’m at war with Leftist women, it’s certainly not one I started. I merely recognize the hypocrisy of Leftist women.

Take the #MeToo movement, born during the time of Harvey Weinstein. An adjunct of the Women’s Movement, which I proudly support, by the way. Stern and Quivers know all about the dozens, no hundreds, dare I say thousands of women abused by Weinstein and others like him. They know the sexual abuse rampant in Hollywood for decades, a veritable conveyor belt of debauchery. All women have known about it for decades, and Leftists women have been willing participants, and certifiable enablers.

Rose McGowan, Ashley Judd, and the litany of others, all mostly vapid Leftists who gladly participated in the sexual exploitation commonly experienced in Hollywood, that is until their time (careers) was up.

How many women did they know would suffer the same fate as they?

All the #MeToo women knew of Weinstein (and others still undisclosed), yet they gladly participated…until their time ended. How many women did other women say acted as Weinstein’s pimp, setting up his trysts?

Look at all the pictures of Weinstein on Google pictures, and see the litany of Leftist women, the richest, most accomplished on the planet. What you see are Weinstein enablers, all too happy to ignore what everybody in Hollywood knew of Weinstein and know of others.

Leftists women celebrate this movement. One by one, they come out to get their accolades for cowardice, they selfishly declare as “brave”. What a farce.

Any woman who calls herself a true Conservative would never participate in such a travesty, much less cry foul afterward. There are many women who left Hollywood once they encountered their first “Weinstein”. They never looked back. For them, their dignity was more important than stardom.

Back to my tweet, in a effort to help Stern understand my logic.

First, there is the timing (like that #MeToo timing, Stern) of the allegations against Kavanaugh. I read all the information leading up to the “revelation” sprung by Senator Diane Feinstein. A 10-year-old blind kid could see through that bullshit.

Second, I understand the devious nature of Democrats: the Party that lynched black people in the past, and continue a refined version to this day.

Democrats then trotted out more victims against Kavanaugh. Like Fords, their stories didn’t pass the smell test. I’m actually surprised Stern didn’t invite the third Kavanaugh accuser on his show given her salacious allegations.

Julie Swetnick said she attended not one, but TEN “gang rapes”. She added that these event were either attended or set up by Kavanaugh.

Swetnick: I watched as Kavanaugh waited his turn at one of the ten gang rapes I attended.

Stern: Hey, I’m not one to question what you’re into, but maybe after the THIRD gang rape you could have asked your date if he would just take you to a movie?!

I’m not sure how Stern looks at things, but when I’m considering a scenario, I look at all sides of the debate.

So for example, while the Senate Judiciary Committee was grilling Kavanaugh over his high school year book, Christine Blasey Ford or people associated with her were scrubbing hers.

Ford mentions her therapist’s note as evidence that she suffered mightily. However, when asked to turn over the information, she declined. No sense giving people a “look-see” inside that brain-dead skull. No?

That’s right, there is the possibility that Ford’s therapist’s notes might exonerate Kavanaugh.

When Ford was asked about knowing with 100 percent certainty that it was Kavanaugh who “raped” her, she spoke of epinephrine and hippocampus, with hardly an emotion in sight.

I wrote recently of a girlfriend of mine who was raped before I met her.

Sadly, I found out accidentally as she broke down over a Spring Break commercial, the event where she had been raped over a decade earlier. That was her reaction every time at “Spring Break”.

In the same article I spoke of a friend gang-raped by two men. When she confided in me about the incident, I will never forget the emotions involved, including my own tears.

One of my staffers is a woman who was raised by a drug-addicted mother. Her mother (and one of many boyfriends) taught her daughter how to weigh cocaine at the age of 5. By the time she was 7, my friend was turning tricks (not by choice) to pay for the dope her mother and mother’s boyfriend craved at the time.

As a teen, my friend was raped; again by acquaintances of her mother. My friend called herself at the time, “a victim of my life”.

She later joined a gang, committed heinous crimes, and went to prison. We met after her release, and she was told to contact me by a friend who follows my work.

She and I spoke and I felt compelled to help her. Thus, I committed to help her tell her story. I knew her powerful message would help lots of young women of all colors, especially women of color.

With all his fame and fortune, I doubt Stern has such a story to tell.

For the record, I’m not looking for anything from Stern. I doubt he reads this, or gives a shit if he does. It’s easy for him to make radio fodder about people really trying to make a difference in the world. That takes no balls and it pays well.

I don’t have the money that Stern has, but I have things Sterns doesn’t have: principles. Mine are not for sale, not even to Fox News.

And I know the Shock Jock has a problem with the word skank, so I ask him,

“What name do you give a person who lies about someone, accusing the person of a criminal act. That lie could cost the accused one’s job, one’s family, and one’s lifelong reputation?”

Is there a vile enough word for such a person?

Give me that word, Stern and I will label any man or woman as such, if they intentionally attempt destroy a good person’s life based on a blatant lie.

Finally, I’d like to ask Stern what he will do when it turns out that Ford lied? Will he have a show where he admits I was right? That show is not needed: Stern already knows I’m right.