Nike hides its racism in plain sight. They gave a contract to Kaepernick, and most blacks saw this move as that of a social justice warrior.

I saw the move for what it was. A pimp move. A mack move in fact.

A mack is the highest of pimps, able to have the best women, drive the fanciest cars, and yes, make the most money. Nike is mack to the hilt.

They hired Kaepernick, a chump seen in the black community as a man who speaks truth to power. But Kaepernick is little more than a profiteer. He’s the Al Sharpton of the NFL.

This is why Nike built their ad campaign around him, reminiscent of The Negro Project. In racist Margaret Sanger’s plot to destroy blacks, she said white elitists only needed to get a few blacks paid off and made leaders in the black community. The elitist whites would get these handful of blacks to keep the other blacks in check.

In the old days, the Negro Project used only black pastors. Fake men of God who used the Bible as a prop to get black people to believe the pastors acted in their best interests. Jesse Jackson, Al Sharpton, and others got rich doing this. Little did America know that Kaepernick would become an evangelist on the gridiron.

Nike didn’t need to do something so stupid. Look at this one-year growth chart. 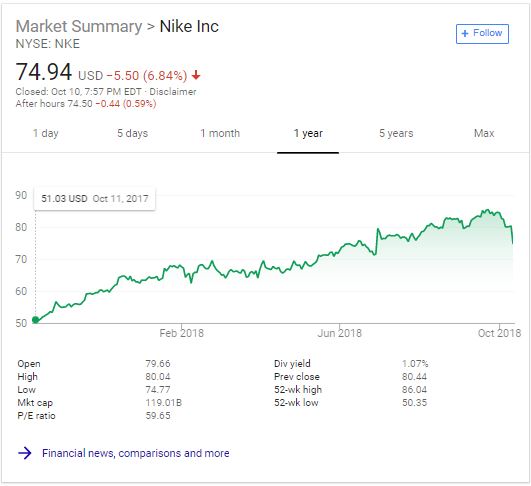 As you can see, Nike’s chart shows steady growth.

The media reported on Nike’s online sales, citing a 31 percent surge. This was the media’s cover up for Nike. They wanted the public to believe that a company condoning the death of black teens was actually benefiting from its racist stance.

Next, the media alerted us that Nike had recovered its market cap. Then the media reported that Nike stock had grown more than the pre-Kaepernick annoucement. In fact, on Sept 21, the stock hit $85.55.

I watched Nike stock closely, and saw the growth. Then, I discussed Nike on my radio show, and commented that Nike won’t feel the true impact of their move right away, outside of that first day downward surge. I warned my listeners to pay attention, as the tsunami was coming for Nike.

Americans were burning Nike gear. Worse, no longer were Americans–the best consumers in the world–buying Nike.

This meant Nike has inventory they can’t sell. Moreover, Nike now must adjust their sales forecast down. So manufacturing must adjust levels to accommodate lesser demand. Eventually the price of goods go up, since Nike will lose some economies of scale.

All this is beginning to happen.

Nike stock dropped recently to $74.94. That’s one of the largest drops in quite some time.

Admittedly the market took a big hit as well. And while Nike will recover some market cap, our branding of the company won’t change any time soon. 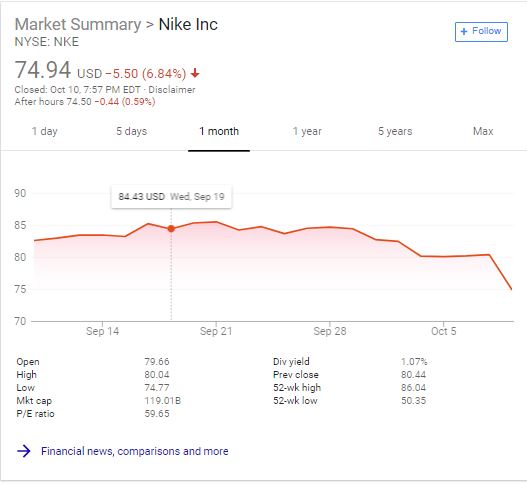 Competition will smell blood in the water. They will snatch a contract or two from Nike, who no longer maintains the power of the Conservative American consumer to back their play.

Nike is relying on the death of black teens for future profits. But that will backfire as well. And once people see through the ruse, Nike will suffer even more.

I believe in some small way #TeamKJ is responsible for this drop. We are the only team to my knowledge who called Nike out for what they actually are…racists.