In what is yet another sign of sanity returning to America, a Trump-hating principal gets suspended.

When will Wackademia wake up to the reality that Trump is president?

In the case of this principal, the logic is hard to follow. Why wouldn’t she encourage the promotion of America’s leader at a school event? Further, isn’t a principal supposed to encourage students to think critically and make informed decisions? Yet, this student was punished for showcasing an opinion. 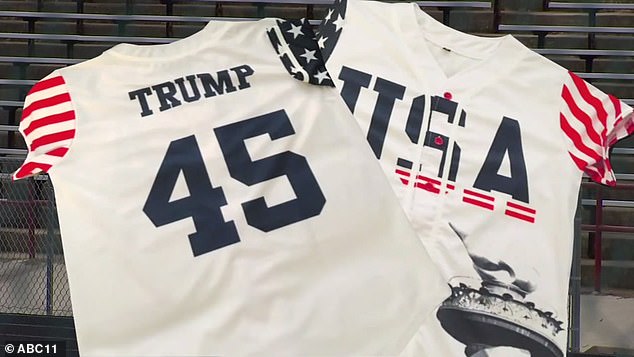 After forcing an 18-year old high school student to take off a Trump football jersey during a game, Cindy Gordon, Principal of Harnett Central High School in Angier, North Carolina, was removed from her job. This Leftist was still living on Obama-era muscle memory.

The jersey depicted stars and stripes on the sleeves and the name ‘Trump’ on the back with the number 45 below it.

The student donned the Trump jersey at a patriotic-themed football game in which they were encouraged to dress in anything appropriate for “America Night,” WTVD-TV reported.

I don’t recall a student ever being made to take off an Obama shirt. But wear Trump gear, and the leftist fury hath no limit.

According to sources, people in the crowd did not like the high school senior’s political fashion statement. Succumbing to peer pressure, Gordon to asked the student remove the jersey. The boy complied and then went home.

The father of the student, Mike Collins, said his son was embarrassed by the experience and complained about Gordon forcing his son to remove the jersey.

‘”We don’t want any kids violated. We don’t want to see kids embarrassed over something like this,” Collins told ABC11. “He was not disrespectful. He was not acting in a manner that would cause attention to him.”

Gordon had the opportunity to stand up for her student. Instead, she asked him to bow down to bullies.

This kid did exactly what was asked. Once again, I can’t find a single story of a student forced to remove his Obama gear. So clearly, this crowd bullied Collins for being conservative.

It’s a shame this kid didn’t just stand up to the Principal and refuse to take off the jersey. It guess that’s the drawback of raising respectful kids. However, if Wackademia would do it’s job, this kid would know he had the unequivocal right to wear his Trump jersey proudly.

Unlike so many stories dealing with leftists, this one has a happy ending. The Harnett school district on Friday announced a new principal for Harnett Central High School. Further, the district didn’t try to make excuses. Instead, the made it clear- Gordon’s termination is a direct result of her actions at the game.

The changes are “effective immediately,” according to the district news release.

This is just one more example of childish, petty and divisive behavior we have been witnessing from the left for the past two years. Yet, despite the vindictive actions from the left, we’re still #Winning.

Can you think of any news article stating that a conservative asked someone to remove, cover or take off an article of clothing because it offended them? If anyone knows of one, please give me a link so I can see it with my own eyes.