Democrats are an interesting study of the reptilian brain.

They are programmed to feed the beast. Thus, they remain ideologues to the bitter end.

Leftists know they have been caught yet again in a plot against America. They attempted to impugn the reputation of an innocent man. And every one of these snakes knows that Brett Kavanaugh is innocent. Moreover, they know that Ford, et al lied through their coffee-stained teeth.

But that doesn’t matter. Because don’t see what those women did as lying. Which is why they doubled-down. Back to this shortly.

Consider what Democrats tried with Donald Trump throughout the 2016 campaign.

They labeled him a misogynist based on an old audio recording of Trump discussing what women will let men of means or status do: grab ’em by the naughty bits.

If anybody knows many women will allow men to grab their p*ssies and much more, it’s Democrats. Women allow this of movie stars, rock stars, rich men, and even run of the mill hot guys.

Look at what Hollywood shrews let that Shrek Weinstein do! Weinstein made stars. And women lined up to get “serviced” by Weinstein in hopes of being the chosen one. In sales, we called having sex with an ugly buyer, “Making the ultimate sacrifice!”.

In Hollywood, despite Weinstein’s trouble, there exist thousands of other mostly Leftists women who gladly continue getting their turn biting the pillow.

However, Democrats feign ignorance and innocence, like they’ve never heard of a “groupie”, or a “party favor” among those Hollywood elitist males.

Of course Democrats dismiss their sins, all to remain true to the agenda.

According to the Left, if you are a woman you are a victim. Period. Sexually, financially, ok, genitally. Thus, under President Trump, women must believe they face Armageddon. At any time and with no notice, women could have their rights ripped away.

With a single speech, Sen. Collins, announcing her support for Kavanaugh, has paved the way for a much more conservative Supreme Court for the next generation. Abortion rights, gay rights, climate change, and health care reform could well be impacted for decades to come.

With a single speech, Sen. Collins, announcing her support for Kavanaugh, has paved the way for a much more conservative Supreme Court for the next generation. Abortion rights, gay rights, climate change, and health care reform could well be impacted for decades to come.

That’s how Democrats see the killing of children. Acosta doesn’t even have the decency to frame it as feminists have: a woman’s right to choose.

After all, it’s HER body, right?

And Brett Kavanaugh stands in the way of that right, thus the attack. If Democrats were honest, they would admit this, and stop the shenanigans. Tell America that they targeted Kavanaugh, but that they would have targeted anybody. Democrats stood at the ready for whichever candidate Trump proposed that would undoubtedly flip the court in favor of Conservatives.

So what real victims of sexual abuse have to take it in the shorts for a bit. It’s the long-range plan that counts.

Kavanaugh’s innocence was never in question. In fact, feminists really don’t want his innocence adjudicated. This is why Christine Blasey Ford didn’t pursue further charges. Well, that and the fact that Ford doesn’t want anybody looking at her sex-stained panties of the past.  So, adjudicating Kavanaugh’s innocence means shining the light on Ford’s guilt. And if Grassley gets his way, America may get a real glimpse into the life of that vile liar.

But what of the elites? The real influencers.

Take the Hollywood crowd who intentionally got arrested in DC. They arranged not a single protest in Hollywood against Harvey Weinstein and others like him. These women sat on their vagina hats, nestled comfortably under their butt cheeks.

Emily Ratajkowski is one such example.

Famous for being topless before people started noticing her beautiful face. Ratajkowski appeared in singer Robin Thicke’s music video, “blurred lines.” Her role was simple: dance around the singers naked. 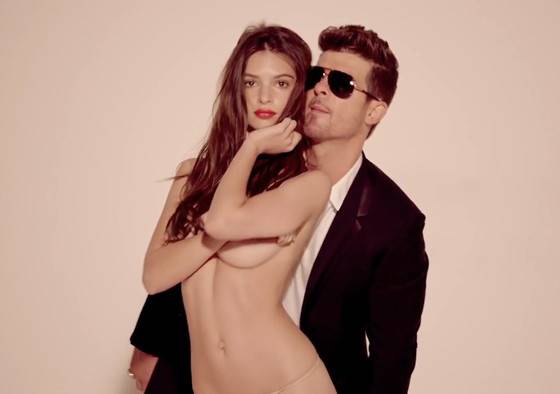 The picture above is the “PG” version taken from the video.

“Rat” was one of the main celebrities attending the many protests over Kavanaugh’s confirmation and even bragged on Twitter about how she was arrested.

Today I was arrested protesting the Supreme Court nomination of Brett Kavanaugh, a man who has been accused by multiple women of sexual assault. Men who hurt women can no longer be placed in positions of power. pic.twitter.com/nnwq1O4qk3

Oh the irony of a woman who contributes to the sex-crazed world of Hollywood that commits sexual abuse on a regular basis.

I’m not sure these women are smart enough to see both the irony and the hypocrisy, certainly not simultaneously.