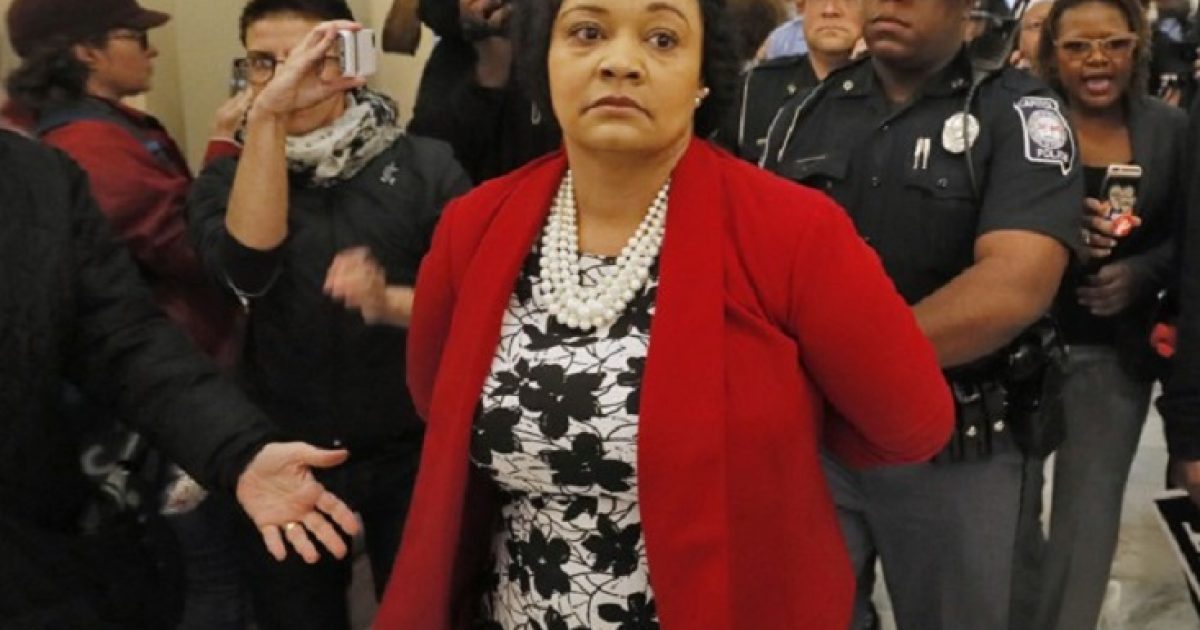 Democrats won’t quit until the losers become the winners.

So what the people spoke, the votes tallied, and the Republicans won. That’s not what Democrats wanted, so why not cheat.

Thus, the group that speaks of election integrity and honoring the will of the people always bitch and moan when they lose. Next they try to steal elections with “oops, lookey here” votes. Finally, they protest.

That’s what’s happening in GA, where 15 people were arrested for disorderly conduct after refusing to leave the state Capital.

According to the Atlanta Journal Constitution,

A first-term Atlanta senator was among more than a dozen demonstrators who were arrested during a protest in the state Capitol.

State Sen. Nikema Williams, D-Atlanta, said she was standing with her constituents when officers led her out of the Capitol rotunda and placed plastic restraints on her wrists.

“I was not yelling. I was not chanting…stood peacefully next to my constituents because they wanted their voices to be heard, and now I’m being arrested.”

Williams said she was handcuffed after she “refused to disperse” from the rotunda.

Williams represents the next generation of “No justice, no peace!” race pimps. And in the tradition of such clowns, it is necessary to get arrested to show that pimps go down for the cause.

Williams said she felt as though she was targeted for standing with protesters concerned about voter suppression.

Williams believes there was voter fraud as much as she believes pigs can fly. Protesting and getting arrested are Leftist stunts used to cover for their own malfeasance.

And as I discuss in my book Race Pimping, one always protests for “the people”. Then use catchy phrases like the “bedrock of our democracy”.

The other 14 protesters are charged with disrupting the General Assembly. And who were they?

As it turns out, the protest was organized by a local Black Lives Matter group. They wanted to pressure state officials to ensure all absentee and provisional ballots are tallied in the governor’s race between Stacey Abrams and Brian Kemp. These votes would include the votes of dead people, made-up people, illegals, and criminals. To put this simply: black lives only may matter, but when it comes to voting ALL Democratic votes matter, legal or not.

In the governor’s race, Kemp has rightfully declared victory.

So how big are these protests?

Thousands? No. Hundreds? No. Only dozens, as estimates had the group around 100. You can bet it was smaller.

Occasionally, the group chanted “count every vote”, just to be sure people knew what they wanted.

In all honesty, the media shouldn’t cover this nonsense. They do so in order to make America believe the narrative that Democrats are protesting for “valid” elections. Actually, these protests cover for what Democrats try to do each and every election.

A very sad group of people who can never be pleased.

Kevin Jackson - June 4, 2020
Trump rattles the Left. And for many reasons. That's why they hate him. First, he speaks the unadulterated truth. And Leftists live lies, ergo they...