Trump has a lot to be proud of today. The GOP held the Senate. The blue wave dissipated, as promised.

Meanwhile, Hollyweird is starting to get the message. Americans don’t hate Donald Trump.

While Barbara Streisand is likely calling her real estate agent, other liberals are soaking in bigger blows.

Take the unhinged Alec Baldwin, for example. Sure, he started out with all the promise of most good looking A-listers. Baldwin impressed us with his good looks and super cool personas. Remember Jack Ryan? The Hunt for Red October? But Baldwin couldn’t leave his legacy well enough alone.

Baldwin just had to take a stab at being Donald Trump, in SNL Land, of course.

Turning the president into a running joke might prove the most consequential work of his career.

Of course, Baldwin took it as a compliment. Little did he know, Baldwin signed his own death certificate.

Baldwin is first to admit none of his movies are blockbusters anymore. In fact, he’s pretty sure that’s how he landed the SNL gig impersonating Trump. And he never thought Trump would win. Several times, Baldwin wished Trump would show up at SNL and put an end to the ridiculous imitations.

But instead, Trump dropped a Twitter bomb on Baldwin. 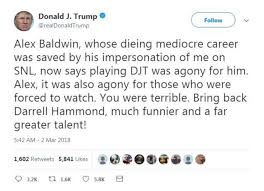 In the famed words of 90s pop-star Alanis Morissette, isn’t it ironic? Don’t ya think?

We have a man wasting his career on a two-bit impression of Trump. Meanwhile, his own life is a complete disaster. Recall the irate voicemail he once left his daughter? Baldwin called his own child a rude, thoughtless pig. He throws punches at every turn. And he once told a reporter, “I hope you choke to death.”

Yet, Baldwin insists on calling Trump the narcissist.

Still, Baldwin carries on, believing most Americans see things his way. Then there’s this whole fiasco about a book he wrote, but didn’t write. Another flop. And now, he supposedly has his own show. The Alec Baldwin Show.

Never heard of it? Don’t worry, neither had we. But while Baldwin thinks he’s #Winning, Trump is the actual winner. And the irony continues.

While Donald Trump is celebrating the blue wave that fizzled, Alec Baldwin is processing another disaster. His new show.

ABC quietly announced on Election Night that “The Alec Baldwin Show” would move from its prestigious time-slot on Sunday evenings to a less desirable Saturday night spot, amid disappointing ratings and negative media attention surrounding the hot-headed thespian.

Repeats of “Shark Tank” will replace Baldwin’s beleaguered talk show on Sunday at 10 p.m. “The Victoria’s Secret Fashion Show Holiday Special” and “The Sound of Music” will also air on Sunday nights. “The Alec Baldwin Show” returns Dec. 8 in its new timeslot — 10 p.m. ET on Saturdays.

Variety – a leading Hollywood trade publication – said “ABC has all but pulled the plug” on the show, pointing to the program’s dismal ratings. Variety noted Baldwin’s show is “one of ABC’s lowest-rated programs” and its last episode only attracted 1.5 million viewers.

“The show has failed to find a significant audience,” Variety’s Joe Otterson wrote.

Oops. Apparently Trump-hating isn’t on trend after all. For now, it’s a new time slot. But soon Baldwin will find himself with a few more of Trump’s magic words. You’re Fired!