The Clinton Foundation should have been shut down years ago.

We learned a long time ago this fraudulent “charity” is a charity only for the Clintons. They raked in billions and gave actual little money to the people they purportedly helped.

That this crooked organization continues to operate is a testament to the ruthlessness of the Clintons. Politicos fear the Clintons, and rightfully so. Because the Clintons don’t play.

On many occasions the Clinton proved just how evil they can be, when someone gets in their way. People who have exposed the organization have a funny way of committing suicide with two bullets to the back of the head.

Even with their multiple “blue dress moments”where the foundation has been undoubtedly exposed, the Clintons claim purity. They redefine “charity”, the same way Bill Clinton questioned what “is” is.

But as people vote with their pocketbooks, so do countries and businesses. And when the Clintons were clearly of no significant use to these entities, so went the Clintons’ fortunes. 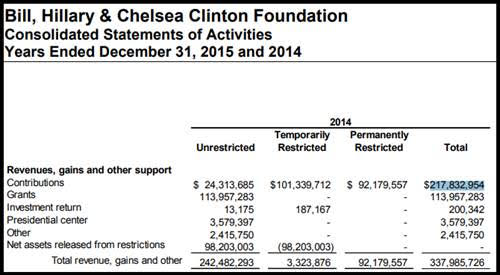 Check out the dropoff, post-election: 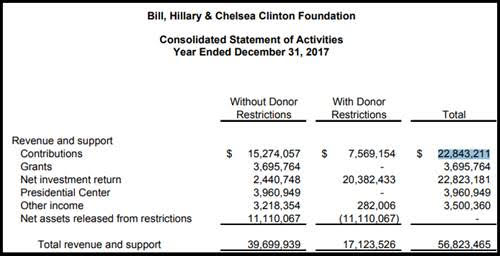 As we reported, the global charity is currently under investigation by the DOJ, FBI and IRS for a variety of allegations.

For one thing, the Fed is investigating The Clinton Foundation. But what’s more important is how Sessions avoided the swamp.

Federal authorities are actively investigating allegations of corruption related to the Clinton Foundation, the charity of Bill and Hillary Clinton, according to a US official briefed on the matter.

The FBI and federal prosecutors are looking into whether donors to the foundation were improperly promised policy favors or special access to Hillary Clinton while she was secretary of state in exchange for donations to the charity’s coffers, as well as whether tax-exempt funds were misused, the official said.

The investigation, led by the FBI field office in Little Rock, Arkansas, is being overseen by the US attorney’s office in the state, according to the source.

It’s unclear precisely what, if any, new evidence ignited the current federal investigation, after initial inquiries had stalled prior to the 2016 election.

So Sessions initiated this investigation in Arkansas, not DC. Thus prying eyes of swamp rats get no view.

President Trump took a moment to chime in:

Clinton Foundation donations drop 42% – which shows that they illegally played the power game. They monetized their political influence through the Foundation. “During her tenure the State Department was put in the service of the Clinton Foundation.” Andrew McCarthy

If America had a real Department of Justice, the Clintons would be in prison for “pay for play”.

For starters, the Clinton-led State Department authorized $151 billion in Pentagon-brokered deals to 16 countries that donated to the Clinton Foundation. This represented  a 145% increase in completed sales to those nations over the same time frame during the Bush administration, according to IBTimes.

American defense contractors also donated to the Clinton Foundation while Hillary Clinton was secretary of state and in some cases made personal payments to Bill Clinton for speaking engagements. Such firms and their subsidiaries were listed as contractors in $163 billion worth of Pentagon-negotiated deals that were authorized by the Clinton State Department between 2009 and 2012.

That’s now the game gets played. And the ease with which an investigative reporter could connect the dots makes this crime a slam dunk. Unfortunately, the media won’t touch this story and expose the Clintons. Because exposing the Clintons means exposing the Democrats.

The Clintons used their “charity” as the family piggy bank.

Here’s what I wrote a while back:

Check out the financials of this white-collar crime of the highest order.

This information is from their 2014 990 Form, and was sent to me in an email. I printed the tax return, so you could see it for yourselves.

The real heart of the Clintons can be seen here. Staggering but not surprising.

This is one of the greatest white-collar crimes ever committed. And just think—one of the participants was a former president and one (gasp!) wanted to be elected president of the United States. If justice was truly served they would both be in prison.

Let’s hope the Clintons continue to dwindle like donations to their RICO fraud.