The rapist and enabler tour didn’t go off as planned.

The Clintons were supposed to begin their tour in Las Vegas on November 18, but that didn’t happen.

Here’s what was reported for tour stops back in early November:

They will kick off the trek Nov. 18 in Las Vegas at 5,200-seat Park Theater. They will visit Toronto’s Scotiabank Arena on Nov. 27, Montreal’s Bell Centre on Nov. 28 and Smart Financial Center in Sugar Land, Texas, on Dec. 4.

Did Hillary find out that Bill had set up some “offsite meetings” with a few Vegas call girls, and cancel that location?

Nah, they just couldn’t get enough people in Vegas to give a crap about them, thus they canceled. And the tour began in another country…Canada! 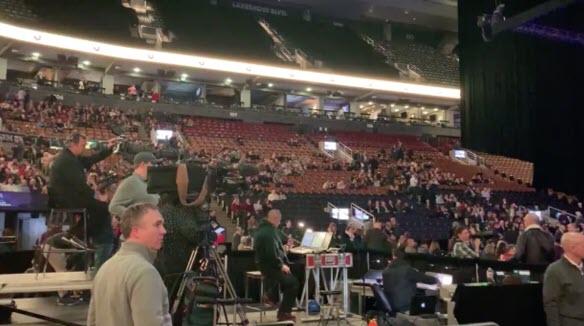 The Clintons were greeted to mostly no-shows.

According to the  Daily Mail only 3,300 tickets were sold in the Scotiabank Arena in downtown Toronto. For those wanting to do the math, the theater holds 19,800.

Bill Clinton said the U.S. had ‘compromised’ its moral leadership in the world under Trump, Imagine a man who “gizzed” on a White House intern discussing “moral leadership”?

“We got a chance to become a democracy again and reclaim a debate,” adding that there were Republicans of good will “who don’t want to make America a single homogeneous authoritarian country. We got a chance to have a debate again now.”

Homogeneous? Since when has America been homogeneous?

America is amazingly heterogeneous, which is why Leftists continue to say otherwise.

And if America were authoritarian, we would OWN the world. We have the capacity to take over countries, but suprisingly we never do.

In an attempt to preserve his legacy, Clinton took shots at Trump and defended the NAFTA free trade agreement. This is the “free trade” whereby Mexico amassed a $72 billion trade advantage over America, and still floods our country with illegals.

As the world has witnessed, Trump put a stop to both.

Clinton spoke of the recent election, where his “wife” got her big ass kicked. Obviously still feeling the wrath of Hillary Clinton, Bill the apologized to the Canadians over President Trump’s roughing up of feckless Justin Trudeau.

“All the rhetoric was just for consumption, it was just rhetoric. And we did some real damage I’m afraid to our relationship and if we did I ask for your forbearance because we do love you, most of us, in America,” said Clinton, who inked the NAFTA agreement during his tenure.

Keep in mind, President Trump renegotiated our trade with Canada. And during the interim, Canadians chastised Trudeau, explaining to him that Canada needed America more than America needed Canada. Trudeau’s poll numbers fell, as Trump’s rose.

Back to the Tour

The Clintons would have gotten a bigger audience live-streaming on Facebook.

A measly 3,900 people, and they had the audacity to book a venue that seated almost 20,000? Talk about optimist.

I commented recently there is only one way for the Clintons to make this tour successful:

Unless the Clintons share Rape-A-Palooza stories, America has heard the rest. At a time when Hillary Clinton’s popularity is in the tank compared to other presidential hopeful losers, they launch their Rape Tour. SMDH.

Even more incredible, the article mentions Beyonce, Taylor Swift and Bruno Mars, as if the Clintons are anywhere near that level of popularity.

But it gets more incredible. Holy Mother of Tony Robbins are these people optimists or what, as somebody believes the Clintons will continue this tour into 2019!

I stand by my assessment. This tour is D-E-A-D. Deader than Teddy, as in Kennedy.

Why would any promoter believe this tour had even a remote possibility of success? The criminal enterprise that is the Clintons will be a great movie, once the truth comes out.

And while we are on this subject, the “billion dollar brand” Obamas fall resemble the Clintons. Leftists want America and the world to believe that their iconic power couples matter. In truth, they don’t.

Regardless, some braindead moron holds on to hope that the Democrats can revive the Clintons. Further, they hope they can recreate the 2008 magic of the magical Negro.

Donald Trump destroyed the Clintons and the Obamas by simply caring about America and the American people. And he has two more years to make Democrats look as idiotic as Joe Biden presidential run.