The Clintons took their show on the road.

And the media was abuzz about the terrible twosome that was to set America ablaze. Fox News 5 wrote of An Evening with the Clintons thusly:

According to a statement from Park Theater, the Clintons are conducting a speaking tour across 13 cities in America, which focuses on the couple sharing stories and moments that helped to shape their careers.

Attendees will be able to have one-on-one conversations with the Clintons during the event, the Park Theater said.

Tickets will go on sale on Oct. 12 with prices starting at $79. A meet-and-greet add-on option will also be available.

To learn more about the event, visit AnEveningwithTheClintons.com.

So tickets have been available for over a month, and I was curious as to how sales went in Vegas.

Moreover, I wanted to get a update on the first event which took place days ago.

Here’s what happened when I Googled the event.

Not a single entry on Google about the Vegas event. I found this curious, as it had been three days since the event before I wrote the article.

So I decided to look for reviews of the event. Below is my actual Google search. 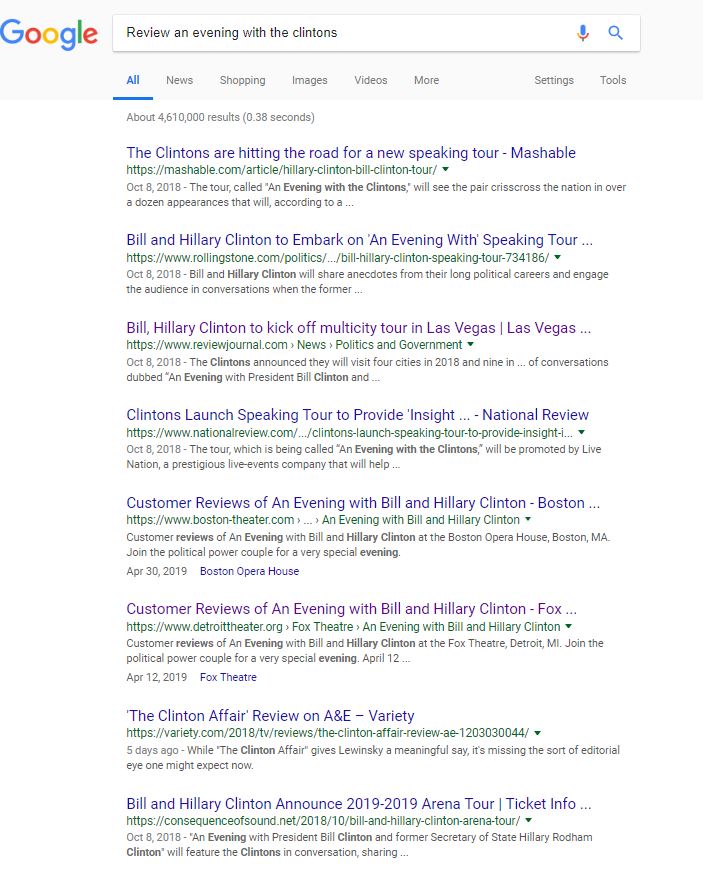 There was only ONE review, and the rest of the entries were from Oct 8 or so.

So I clicked the only site where I could supposedly read a review. Below is what I got. 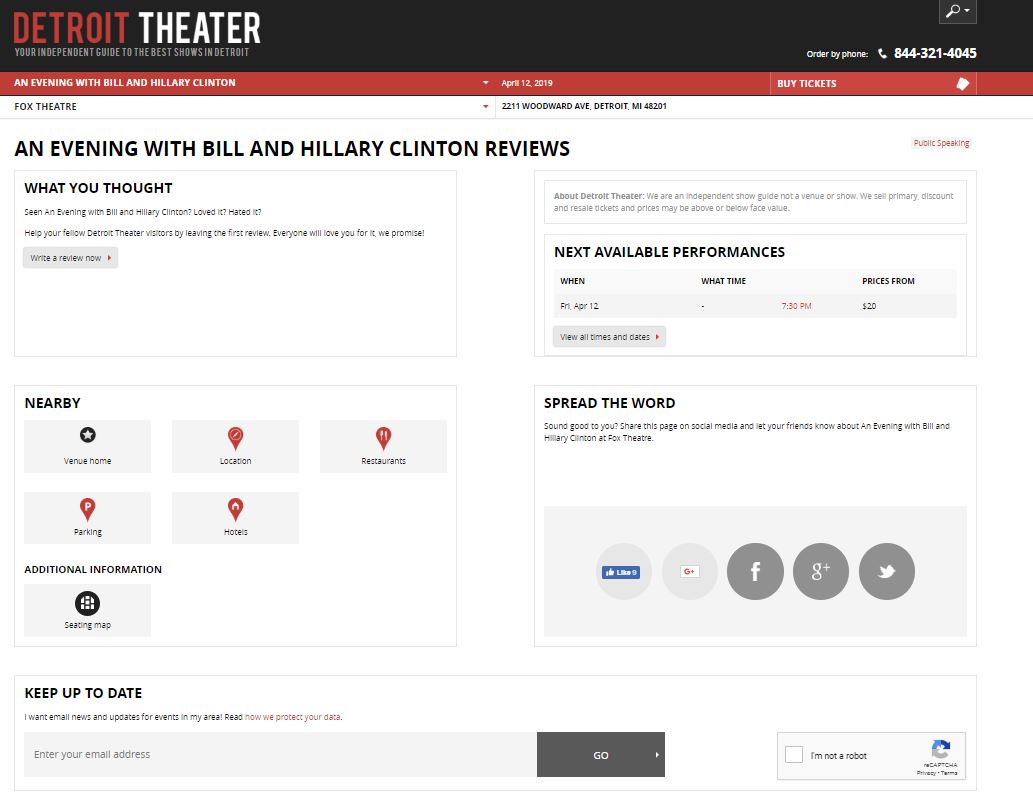 Not a single review had been posted. And the ticket prices seem to have dropped from roughly $80 a ticket to $20, at least for Detroit.

I wrote of this show when it was announced.

Hide your wives and daughters, as Bill and Hillary Clinton put together a tour.

I call it the Rapist and Enabler Tour of America.

But don’t expect feminists to complain too much. Because Leftist women prefer to vent their outrage on innocent white Republican men.

More about the tour comes from Newsmax,

Now that Beyonce and Jay-Z are off the road, another power couple is taking their place: Hillary and Bill Clinton.

The Clintons announced Monday they will visit four cities in 2018 and nine in 2019 across North America in a series of conversations dubbed “An Evening with President Bill Clinton and former Secretary of State Hillary Rodham Clinton.” It is being produced by tour promoter Live Nation, the company behind Michelle Obama’s massive tour to promote her new book as well as tours for Beyonce, Taylor Swift and Bruno Mars.

Funny to see Newsmax call the Clintons a “power couple”. Maybe in the past, but that power has diminished mightily.

Because the Clintons have no significant power left, I made a prediction about the show.

Unless the Clintons share Rape-A-Palooza stories, America has heard the rest. At a time when Hillary Clinton’s popularity is in the tank compared to other presidential hopeful losers, they launch their Rape Tour. SMDH.

Even more incredible, the article mentions Beyonce, Taylor Swift and Bruno Mars, as if the Clintons are anywhere near that level of popularity.

But it gets more incredible. Holy Mother of Tony Robbins are these people optimists or what, as somebody believes the Clintons will continue this tour into 2019!

The Clintons will be lucky to avoid prison in 2019. If I were Obama, I’d keep my eye on them, because Hillary Clinton may soon turn state’s evidence over on him.

Looks like I may be right. We will update you as soon as we learn something.