Call me the whistleblower on the Clintons’ tour.

I have been following the “Rapist and Enabler Tour” since it was announced. I chronicled that the Clinton skipped their proposed opening on November 18 in Las Vegas.

The rapist and enabler tour didn’t go off as planned.

The Clintons were supposed to begin their tour in Las Vegas on November 18, but that didn’t happen.

Here’s what was reported for tour stops back in early November:

They will kick off the trek Nov. 18 in Las Vegas at 5,200-seat Park Theater. They will visit Toronto’s Scotiabank Arena on Nov. 27, Montreal’s Bell Centre on Nov. 28 and Smart Financial Center in Sugar Land, Texas, on Dec. 4.

Next, I discussed the dismal turnout in Canada.

The Clintons were greeted to mostly no-shows.

According to the  Daily Mail only 3,300 tickets were sold in the Scotiabank Arena in downtown Toronto. For those wanting to do the math, the theater holds 19,800.

And now I give you the latest update, per The Gateway Pundit. 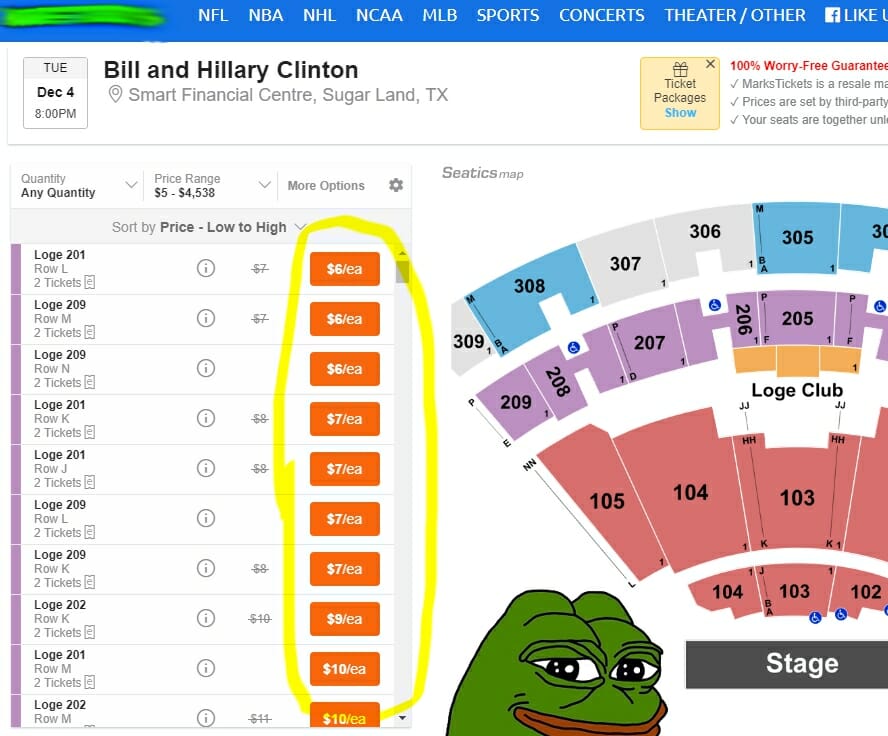 The price of a Big Mac, fries and Coke.

As my team has written of the Clintons, they have much bigger problems than this tour.

And those problems will be highlighted this week.

We get a bit more insight as to what Hannity alluded in his show on Friday.

Hannity said day of reckoning for the Clintons is today. Given the news of this raid, I’d say the Clintons indeed find themselves in deep doo doo.

As The Daily Caller reported,

FBI agents raided the home of a recognized Department of Justice whistleblower who privately delivered documents pertaining to the Clinton Foundation and Uranium One to a government watchdog, according to the whistleblower’s attorney.

The Justice Department’s inspector general was informed that the documents show that federal officials failed to investigate potential criminal activity regarding former Secretary of State Hillary Clinton, the Clinton Foundation and Rosatom, the Russian company that purchased Uranium One, a document reviewed by The Daily Caller News Foundation alleges.

The delivered documents also show that then-FBI Director Robert Mueller failed to investigate allegations of criminal misconduct pertaining to Rosatom and to other Russian government entities attached to Uranium One, the document reviewed by TheDCNF alleges. Mueller is now the special counsel investigating whether the Trump campaign colluded with Russia during the 2016 election.

In other words we now learn what we know to be true about Mueller. As I wrote recently, Mueller is the Democrats’ top fixer.

Honestly, I haven’t seen such an ill-fated tour since Gilligan’s Island. Whoever bet on the Clintons can rip up that ticket.

I will say it again. To think this tour continues in 2019 is delusional. The Clintons need to stop trying to sell their “love story” and lawyer up quickly.

When Robert Mueller gets exposed, the Democrats are doomed. That party put its entire fortune in the hands of their “fixer”. But this problem proved too big for the Democrats’ best.

Recently the president alluded to releasing unredacted information related to the Russian investigation. However, he said he’s not doing so, as the information really damages the Democrats. So he said he preferred to wait until the most opportune time to release it.

I vented my frustration, writing:

I’m tired of the drip of information surrounding the supposed election meddling.

As all of America realizes, it was Democrats who meddled. But in fact, meddle is too kind a word, as these criminals did a lot more than meddle.

Leftists know that Obama weaponized his administration against Donald Trump. And this is not just the spy agencies, but every part of the government.

James O’Keefe exposed many of these traitors, and now at handful look for jobs in the private sector.

But many more exists. And dragging out exactly who this is, insults the people paying the bills. It beyond time we get a look at non-redacted information that explains who plotted against America.

But even President Trump plays games with this information.

With all that is leaking, one has to wonder if some of this is what the president mentioned?

But as bad as the tour has been, things are about to get far worse for the Clintons and their pals.