That’s because the United States again exports our most precious commodity: sanity.

During the Era of Obama, the United States exported insanity. As opposed to providing the world with excellence, under Obama we followed the socialist, New World Order doctrines that have led the world into chaos.

However, President Trump has restored order.

His policy of national sovereignty has world leaders rethinking their previous positions. Trump’s America First doctrine now resonates with other leaders, who no longer take this as America bravado. Instead, they see this as the natural order of things.

To put one’s country first doesn’t mean you consider yourself better. Countries must recognize their unique cultures and preserve those cultures where it suits their interests, and hopefully the world’s interest.

The previous Leftist doctrines have ruined the world, particularly as it relates to mass immigration.

While refugees pour out of Middle Eastern, African, Central and South America, they migrate to Western countries. These refugees have changed the demographics drastically, and the political landscape even more so.

The same is true of refugees pouring into Europe.

Thus, the new stance by many European leaders who now adopt the Trump Doctrine. They reject the UN’s “standardized migration” pact, that cedes their countries to illegals and refugees.

Australia, Israel, and Poland are among the latest to pull out, all citing national interest reasons.

Australian Prime Minister Scott Morris remarked Wednesday that the agreement is “inconsistent” with his nation’s best interest, and that the document “fails to adequately distinguish between people who enter Australia illegally and those who come to Australia the right way”, noting the frequent observation that the paper does not differentiate between legal and illegal migration.

Israeli Prime Minister Benjamin Netanyahu also alluded to the document’s ambiguity on illegal migrants, saying Tuesday that: “We are committed to guarding our borders against illegal migrants. This is what we have done, and this is what we will continue to do,” reports the Jerusalem Post.

Switzerland is now postponing a decision on signing the deal, and the nation’s parliament will debate the issue in the coming weeks.

Prior to the these three countries pulling out, there were two others who joined the United States.

The Czech government has decided the country will stay out of a United Nations pact promoting an international approach to safe and orderly migration.

Wednesday’s decision comes after Prime Minister Andrej Babis vehemently opposed the document, saying it poses a threat for his country’s security and sovereignty.

Babis has argued the U.N. pact that is the subject of an adoption meeting set for Dec. 11-12 in Marrakech, Morocco, is dangerous even though it’s nonbinding because “it, in fact, defines migration as a basic human right.”

Babis noted that the United States, Austria and Hungary also reject it.

I captured a screenshot of a Google search on the subject. And it’s clear to see that more countries add themselves to the list who reject the UN. 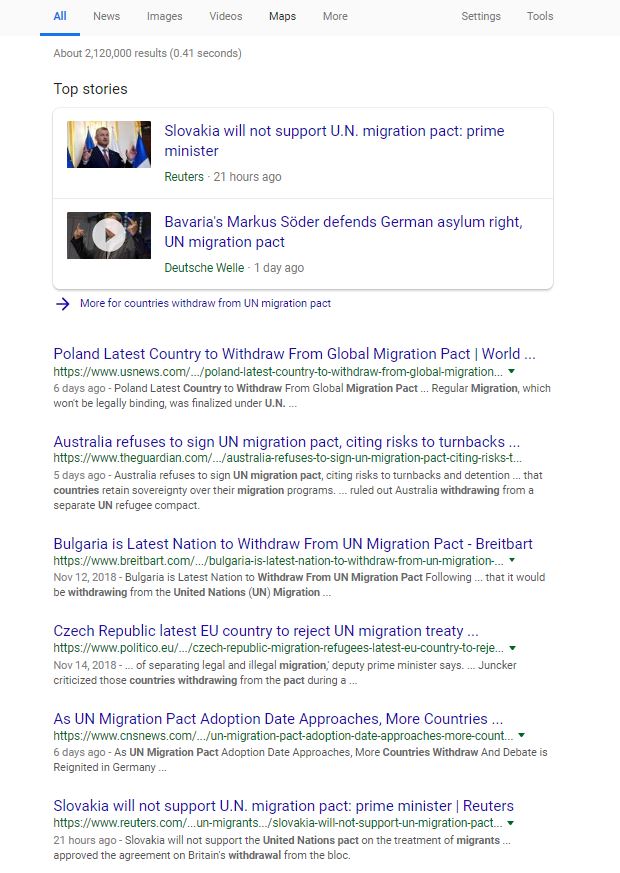 Jean-Claude Juncker has criticised EU countries pulling out of the United Nations (UN) migration pact during a speech in Berlin, where he said Europe “must do everything possible” to kill populism on the continent.

Speaking at an event held by German newspaper Süddeutsche Zeitung (SZ), the EU Commission president said that the growing number of European governments withdrawing from the agreement must be ignorant of its contents.

The leader of the UN defines protecting one’s borders as “populism”. Sounds much like Macron’s definition of “nationalism”.

The list of countries to have exited continues to grow.

Prior to President Trump’s tough stance, this list was practically non-existent.

Juncker argued, countries wouldn’t have pulled out of the pact, “if they had read it”. He added that the principles of “shared responsibility” outlined in the document would actually lead to less illegal immigration.

At least Juncker recognized there is legal migration, something Leftists opportunistically overlook.

Consider where this pact would be had Hillary Clinton been elected president.

President Trump put a serious dent into the New World Order. He did this, because the world is better when each country feels pride in its culture.