I’ve gone on record to say the Rapist and Enabler Tour is over.

The tour began with a cancellation in Las Vegas. Then it moved to an embarrassing opening in Canada. The venue seated almost 20,000. However less than 4,000 showed up.

Then came the well-timed death of Bush, which gave the Clintons a convenient out. They vowed to return to Sugarland, but I doubt it. Before Bush’s death provided the reprieve, ticket sales lagged and were being offered for the price of a Big Mac.

As of now, the Clintons reignite their tour in April. I looked at the schedule, and here are the final chances to see the “not-so-dynamic duo”. 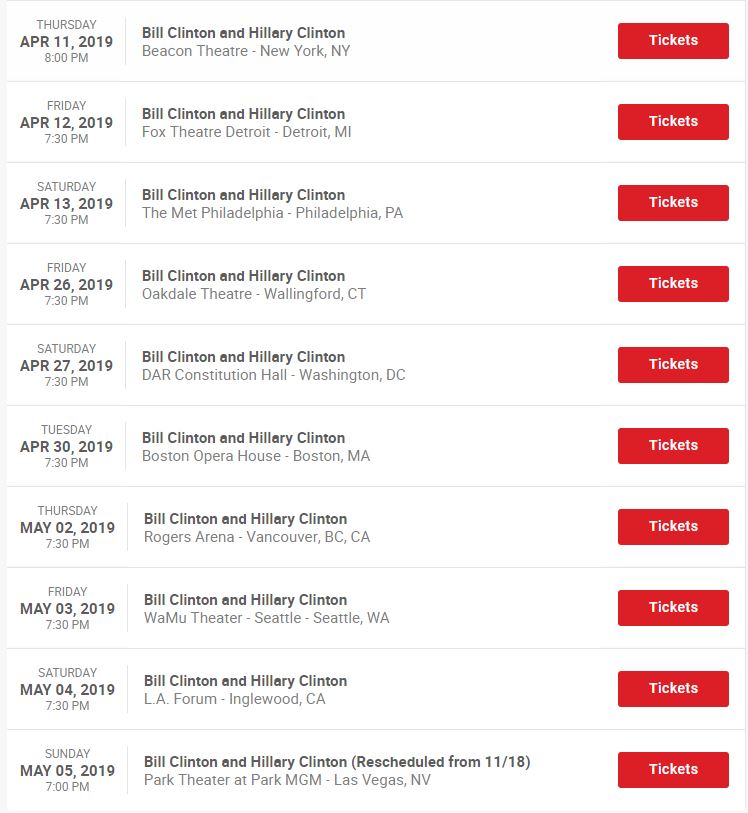 Why the delay? It’s not like the two have another wedding to plan. And God-forbid Hillary Clinton schedule that yoga she bragged about in her deleted emails.

A 5-month break before the next location? That’s not a tour, but an embarrassment. That’s the Clintons holding on to that last thread of rope, as they dangle over the precipice.

And I stand by my prediction that this “tour” abruptly ends. One of the Clintons will pull a muscle or something. From what I heard about the first stop, Hillary Clinton coughed her way through it.

What’s funny about their attempt to energize ticket sales is the notation on the website where you buy tickets. (emphasis added)

In other words, when this tour is officially over, we promise you will get all your money back. So PLEASE BUY TICKETS, even if you don’t plan on going.

And what about this sentence:

If you do not initially see the cheap Bill Clinton tickets for the dates you want, please check back often as our inventory is ever changing.

Trust me; all the tickets will be cheap tickets. If for some ungodly reason you want to see this show, do NOT buy tickets early. The longer you wait, the cheaper the tickets get.

Here’s an interesting thing I spotted on the website. The marquee doesn’t have Hillary Clinton on it. 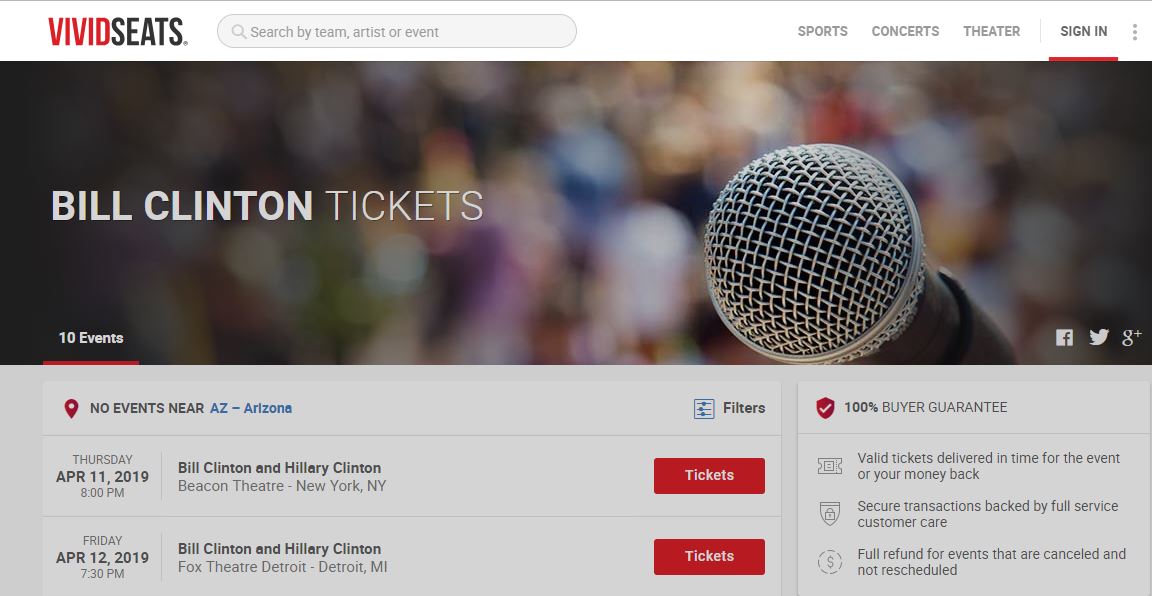 Does Bill Clinton know something he’s not telling us? And this is particularly ominous, when you consider that the tour added Vegas back.

Either Bill Clinton finally found his balls. And said,

“Hillary, if I have to endure this f’g bullsh*t tour with you, then Vegas is going to be the last stop! And then WE ARE DONE!”

Or perhaps Bill Clinton doesn’t believe Hillary Clinton will be on that leg of the tour? For whatever reason.

Remember, there is that FBI investigation lingering over the Clintons’ heads. Something tells me the Clintons may have left that long gap in case of new developments. And given that website banner, Bill Clinton has an alternative tour ending for his embattled spouse.

All we can do now is hold our collective breath, and hope the tour comes to a town near us. I’m sure if we are like most Americans and Canadians, we will have something better to do than see the Clintons.