I honestly don’t know what to add, when it comes to the Deep State’s attempted coup of President Trump. The more we learn, the more I want them to burn for their crimes.

The Gateway Pundit reported on the obstruction of justice that occurred against General Michael Flynn. It’s not like this is news. But the cover-up is.

And then McCabe destroyed the evidence.

In early May Senator Grassley demanded the FBI and DOJ produce the transcript of Flynn’s intercepted calls with Russian Ambassador Kislyak and the 302’s by May 25th.

The DOJ and FBI ignored him.

Grassley then concluded his letter by reiterating his request to schedule an interview with the second special agent who was present at Flynn’s interrogation, Joe Pientka, after push back from the DOJ. 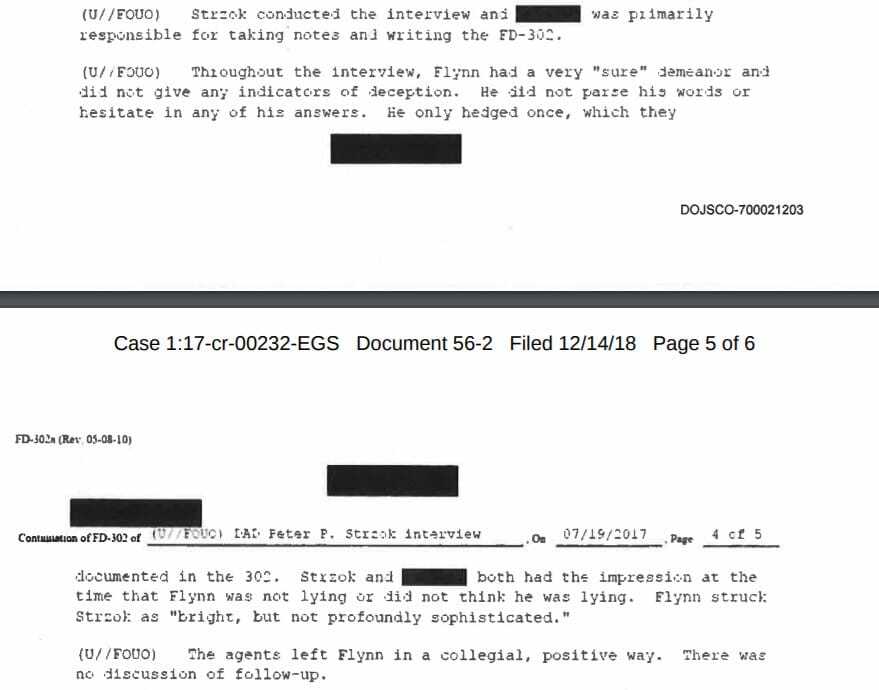 When America finally learns the total truth, Democrats will be rocked to their rotten cores. They claim to want the truth. Of course this means they want anything but the truth. And who could blame them.

Democrats cheat at everything they do. And they are vicious in achieving their objectives.

If this story is true, an FBI agent wants to come clean about Flynn. But because that testimony would conflict with the Leftist narrative, Rosenstein won’t allow it. I suggest it’s far past time for Rosenstein to be in charge. Isn’t there a new Attorney General?

The Federalist lays it out.

While Flynn’s sentencing memorandum methodically laid out the case for a low-level sentence of one-year probation, footnote 23 dropped a bomb, revealing that the agents’ 302 summary of his interview was dated August 22, 2017. As others have already noted, the August 22, 2017 date is a “striking detail” because that puts the 302 report “nearly seven months after the Flynn interview.” When added to facts already known, this revelation takes on a much greater significance.

First, text messages between Strzok and former FBI Attorney Lisa Page indicate that Strzok wrote his notes from the Flynn interview shortly after he questioned the national security advisor on January 24, 2017. Specifically, on February 14, 2017, Strzok texted Page, “Also, is Andy good with F 302?” Page responded, “Launch on f 302.” Given Strzok’s role in the questioning Flynn, the date (three weeks from the interview), the notation “F 302,” and Page’s position as special counsel to Andrew McCabe, it seems extremely likely that these text exchanges concerned a February 2017, 302 summary of the Flynn interview.

Additionally, now that we know from the sentencing memorandum that the special counsel’s office has tendered a 302 interview summary dated August 22, 2017, we can deduce that an earlier 302 form existed from James Comey’s Friday testimony before the House judiciary and oversight committees.

Both McCabe and Comey testified on this detail. And their testimony conflicts. It stands to reason that Pientka’s testimony could clear things up.

Since Jun 11, Rosenstein has stonewalled Grassley as this Fox News story verifies:

Senate Judiciary Committee Chairman Chuck Grassley isn’t backing down as the Justice Department rebuffs his repeated attempts to speak with the FBI agent whose interview with Michael Flynn was used to indict the ex-national security adviser in the Russia probe.

“This is no ordinary criminal case,” Grassley, R-Iowa, wrote in a June 6 letter to Deputy Attorney General Rod Rosenstein. “Congress has a right to know the full story and to know it now.”

Grassley is pressing his request anew after the DOJ once again rejected his bid to speak with FBI Agent Joe Pientka and to obtain the FBI’s records of the interview.

One would think Mueller would want to get to the truth here. Isn’t that his purpose? Go ahead…laugh out loud!

Mueller, Rosenstein, and others in the Deep State continue their treachery. However, it ends soon. And heads will roll.